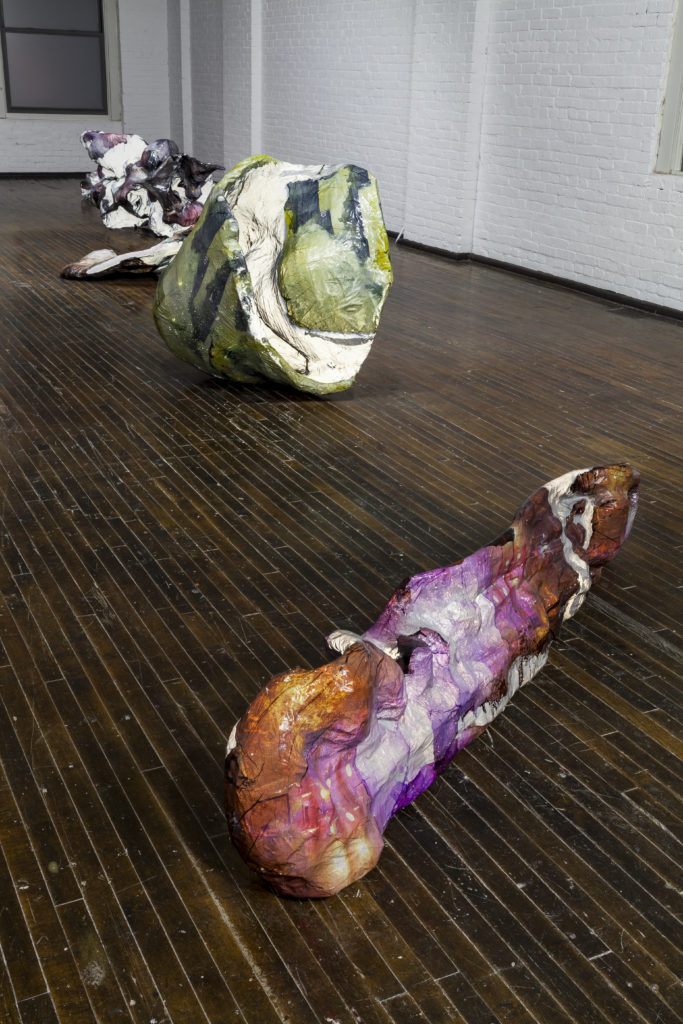 Meerdo’s newest work explores the way technical devices and seeing apparatuses affect the law and militarized police force. In the 1980’s and 1970’s, media theorist and scholar Vilém Flusser wrote about how technical images break down the linear flow of time, foreboding the image’s hegemonic capacity to affect reason. Similarly, Meerdo shows his sense of skepticism towards devices, specifically within body camera chase videos, emerging from new technology that police officers are mandated to wear: These body camera pursuit videos have become the subjects of the artist’s observation and the impetus for his installation.

Exploiting an algorithmic system in order to extract these shapes/ghost images, Meerdo has devised a way to repurpose a 3D modeling technique known as photogrammetry – typically used to produce 3D models from still images. The data he has extracted are blip images, noise frequencies, null data that doesn’t translate into linear knowledge, but instead a tangled mess of spaces. Turning this data into 3D models, Meerdo has then hydroprinted on top of the sculptures’ surface. Images of global protests and state police force atmospheres include tear gas, flare deterrents, and pepper spray, which become abstracted into light and color. These sculptural shapes, based on images and traces, bear witness to the space in between the violator and the law, reminding us of Kafka’s famous aphorism Before the Law, where the narrator stands before a physical threshold awaiting judgement. Of course, these phantom images also resurrect visual traces of black bodies, which circulate the media like chimeras, never receiving a trial, yet having been executed without a democratic judgement. -Vanessa Gravenor

Christopher Meerdo’s work explores ideas of paranoia, entropy and memory through use of data processing, photography, installation and moving images. He holds a MFA from the University of Illinois at Chicago. His work has been shown in numerous locations, including Reykjavik, Nottingham, Seattle, Toronto and New York, with recent solo exhibitions held in Chicago and Jackson, Wyoming. He teaches photography at the School of the Art Institute of Chicago.