A plexiglas cone taller than a person contains another cone inverted with a frosted finish which was achieved by rubbing it with pumice It... 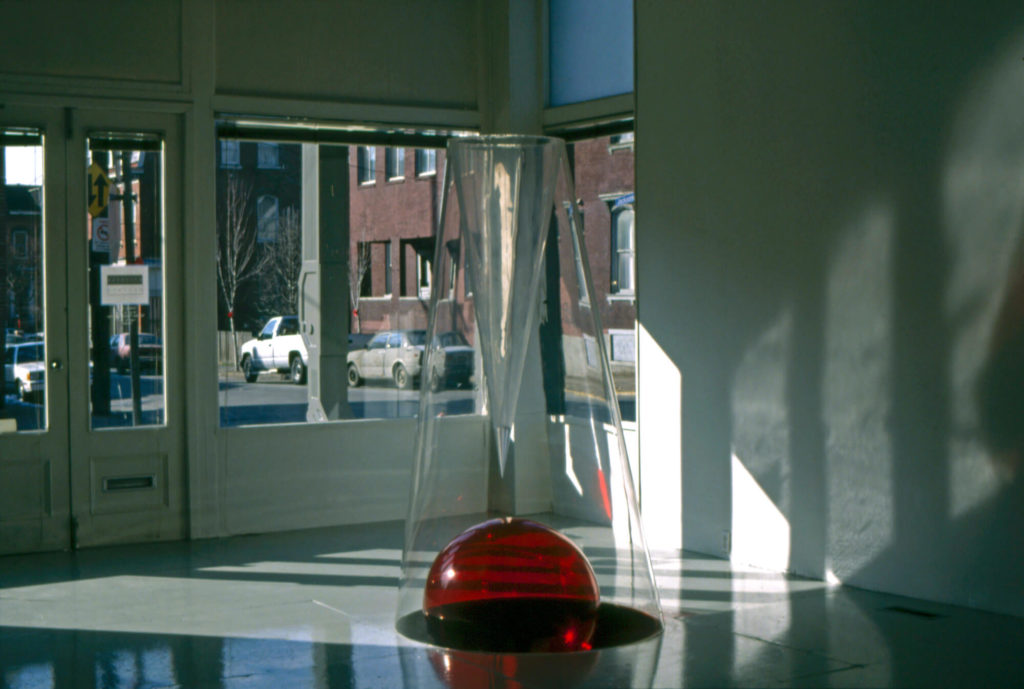 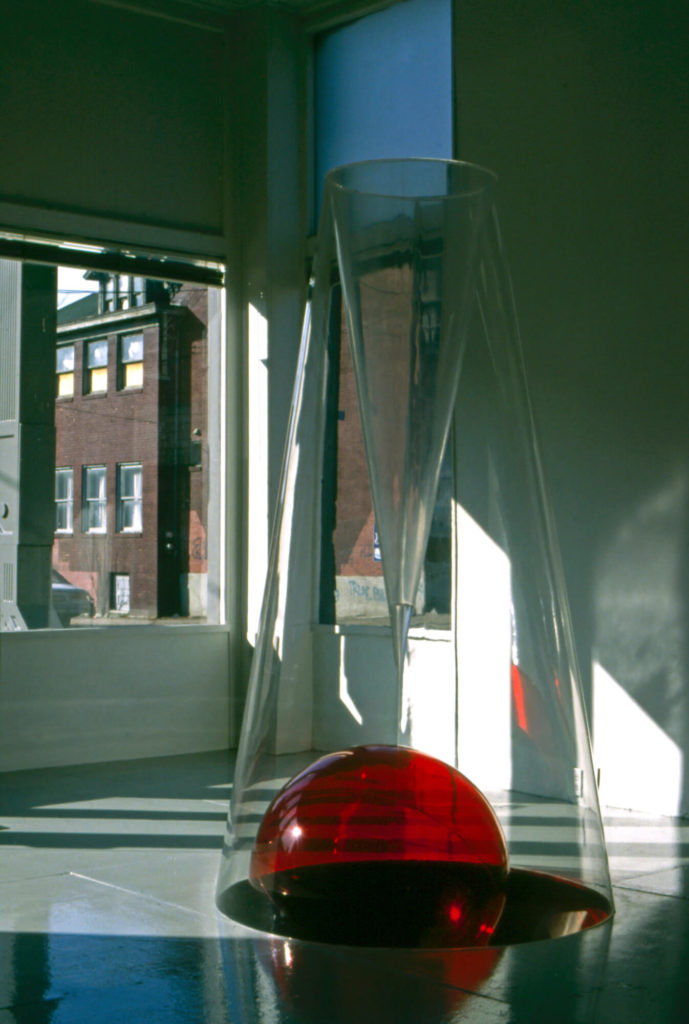 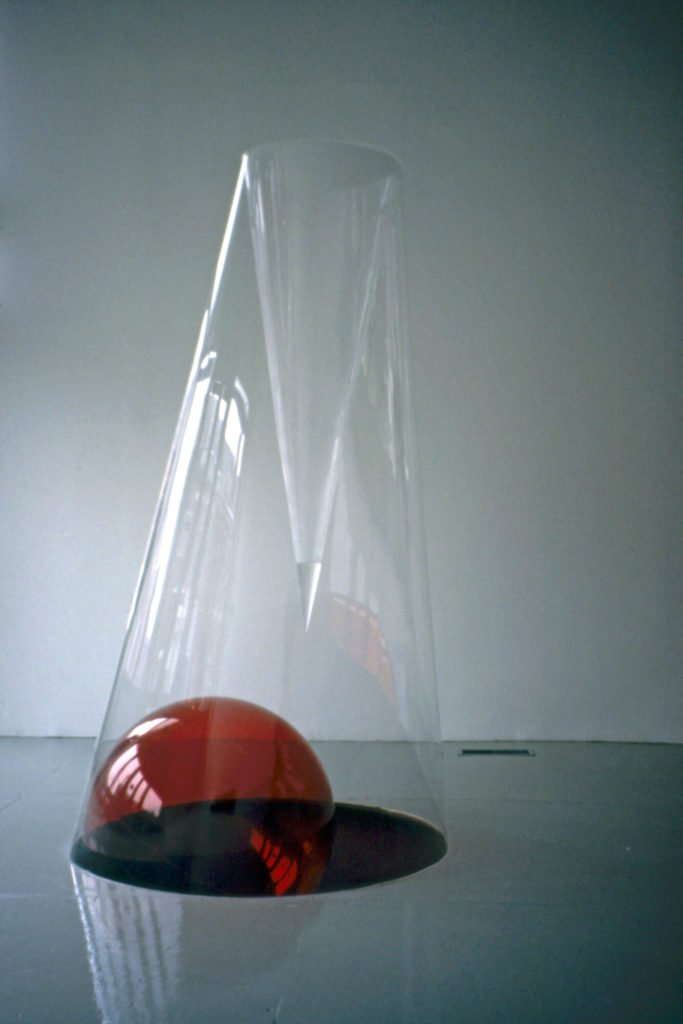 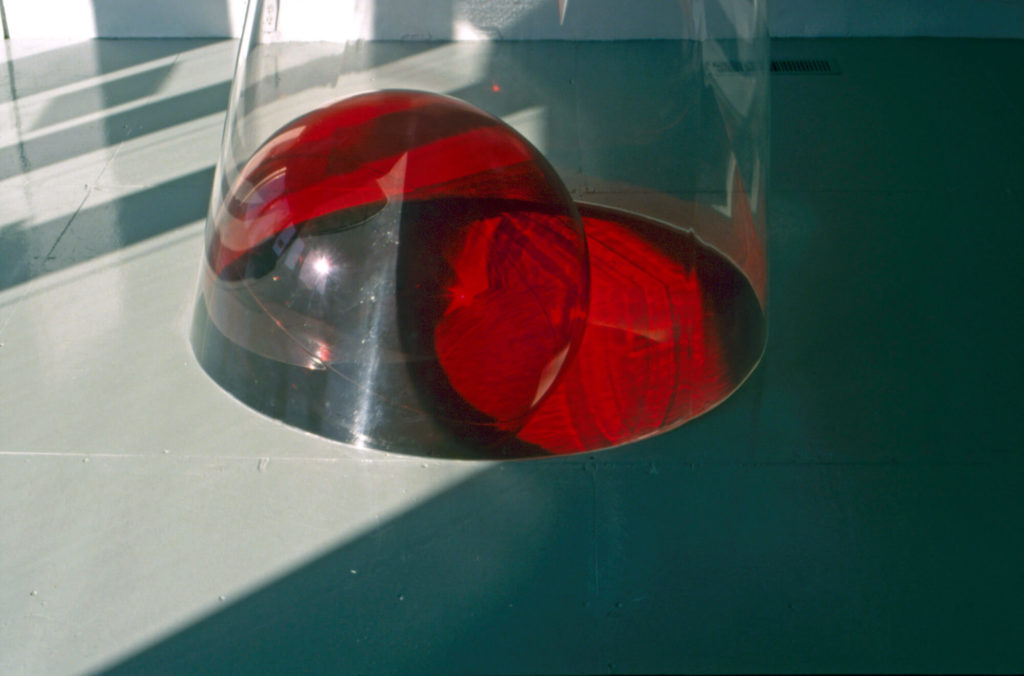 A plexiglas cone taller than a person contains another cone, inverted, with a frosted finish which was achieved by rubbing it with pumice. It also contains a red plexiglass ball, which sits below floor level on a false floor. The installation takes advantage of natural light, as the elements look different from different positions. At times it seems that the red sphere has been cut off at floor level rather than dropped to a lowered platform. At other times a red glow hits the wall. The scale is important since this is the only element in a large gallery. The title word, “Ambit,” means “an area within which something or someone exists, acts, or has influence or power.”

Alison Wilding was born in Blackburn, Lancashire and currently lives in London. Wilding is a sculptor who works with a variety of materials including, wood, stone, bronze, steel, wax, and silk.

She held her first major solo exhibition in 1985 at the Serpentine Gallery, London. In 1991, a major retrospective of Wilding’s work, Alison Wilding: Immersion – Sculpture from Ten Years, was held at Tate Liverpool. She was nominated for the Turner prize in 1988 and 1992. Other notable awards include the Henry Moore Fellowship at the British School at Rome (1988); Joanna Drew Travel Award (2007); and the Paul Hamlyn Foundation Award (2008). Wilding’s work is in permanent collections at Art Gallery of New South Wales, Sydney, Australia; British Museum, London, UK; Henry Moore Institute, Leeds, UK; Musée de Beaux Arts, Calais, France; Scottish National Gallery of Modern Art, Edinburgh, UK; Tate Collection, London, UK; and the Victoria and Albert Museum, London, among many others.