Apparition of Our Lady of Peace, Jacksonia Street, Pittsburgh 2009

Peter grew up in the Eastern Catholic tradition surrounded by Byzantine icons believed to be windows into the Divine Raised in the Jewish tradition... 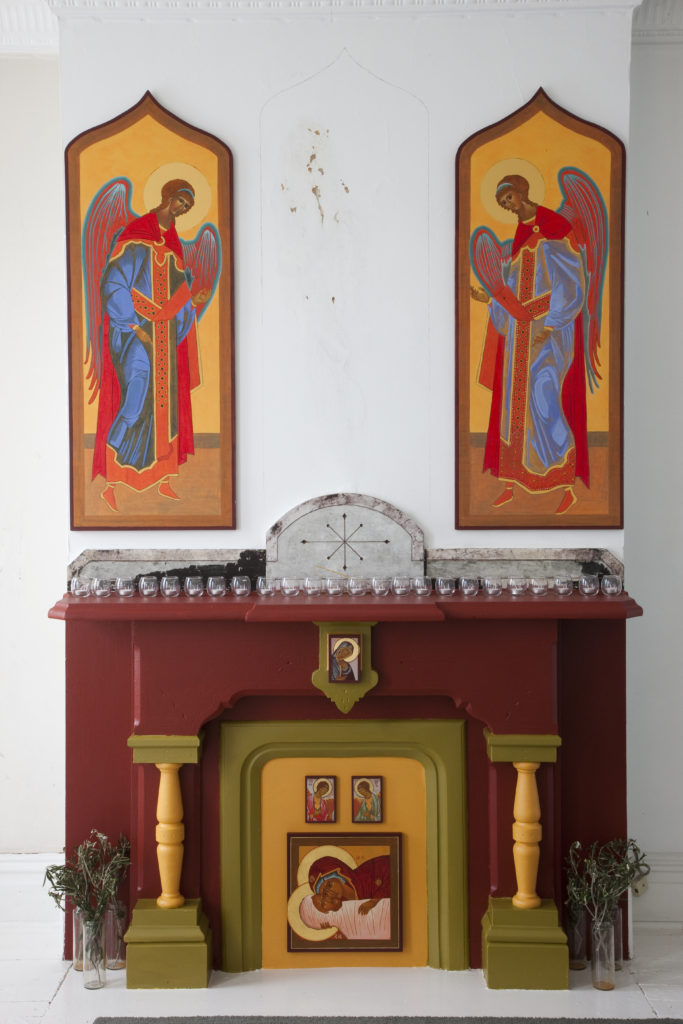 Peter grew up in the Eastern Catholic tradition surrounded by Byzantine icons believed to be windows into the Divine. Raised in the Jewish tradition where such images are forbidden, Stephanie looks for the Divine (and the Divine Feminine) in the everyday. Sightings of the Mother of God—in peeling paint, wall cracks, water-stained sink basins, and grains of wood around the world—are of interest to both of us. Such images require the active engagement of the viewer and testify to a yearning for the mystical experience. The Apparition is announced by archangels Michael and Gabriel, who, in the grammar of iconography, often appear in triptych flanking a central, higher figure. The open palms of the angels are gestures of humility that honor her presence. The novena candle jars, originally used in St. Mary’s Ukrainian Catholic Church, are filled with olive branches as her offering of peace.

Visual artist Stephanie Flom often works with non-traditional media. As a research fellow at the STUDIO for Creative Inquiry, College of Fine Arts, Carnegie Mellon University, she founded the Persephone Project (persephoneprojects.org) which promotes gardening as contemporary art. She has received a Mid-Atlantic Arts Foundation grant award and is a roster artist with the Pennsylvania Council on the Arts. She is the Executive Director of the Boyd Community Center and the Lauri Ann West Memorial Library in O’Hara Township.