The work Beautiful Violence questions the social system and the reliability of our way of thinking. It provides us with a point of entry for thinking, and lets us oppose violence from a more fundamental perspective. 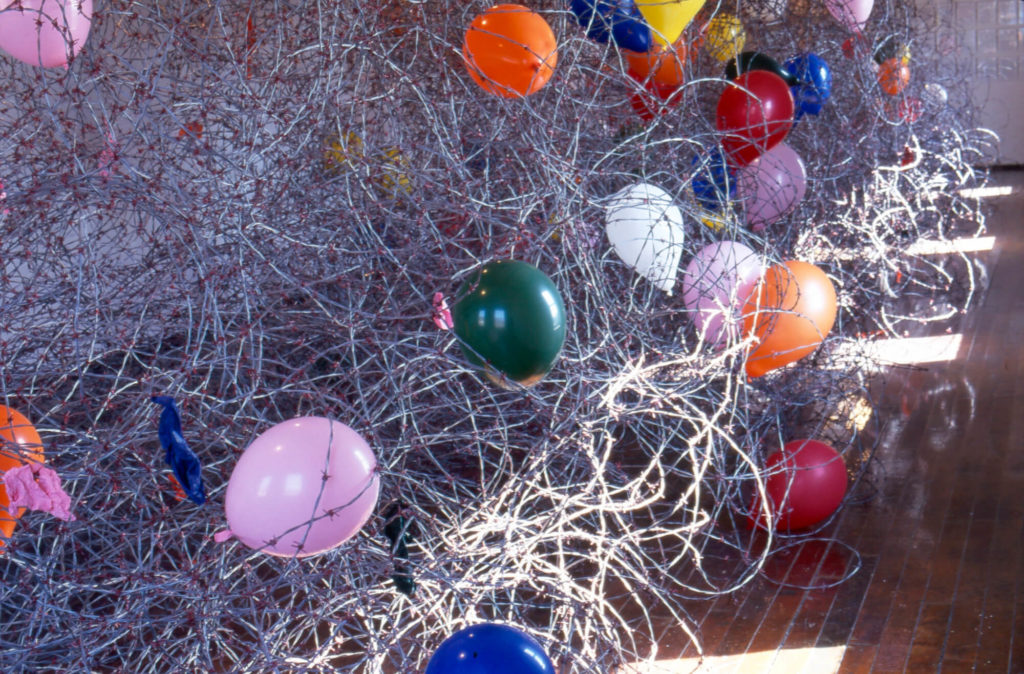 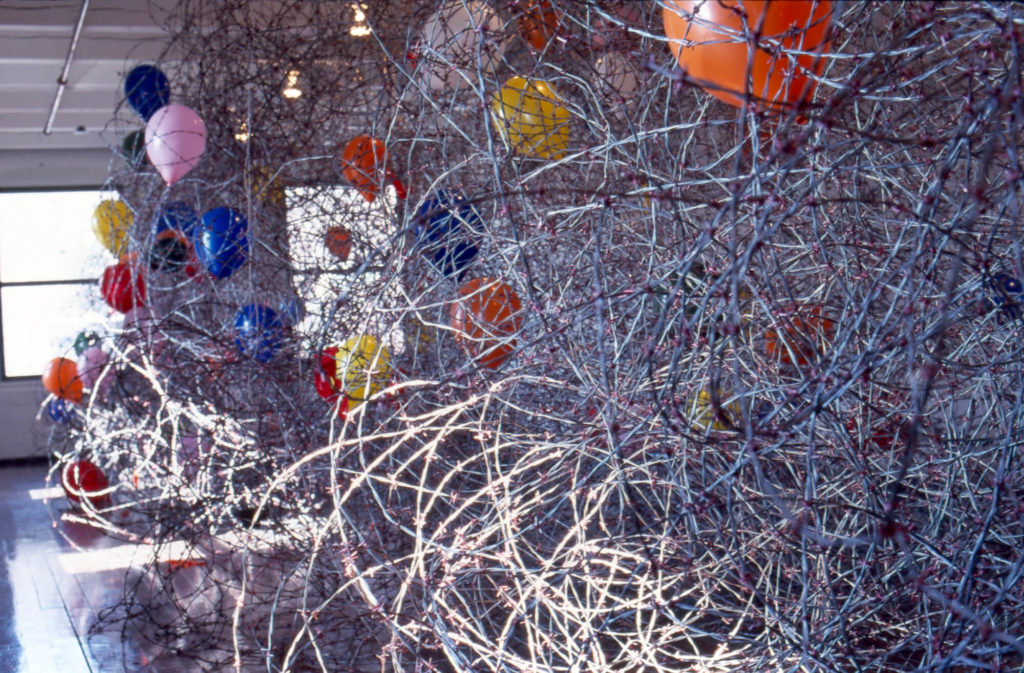 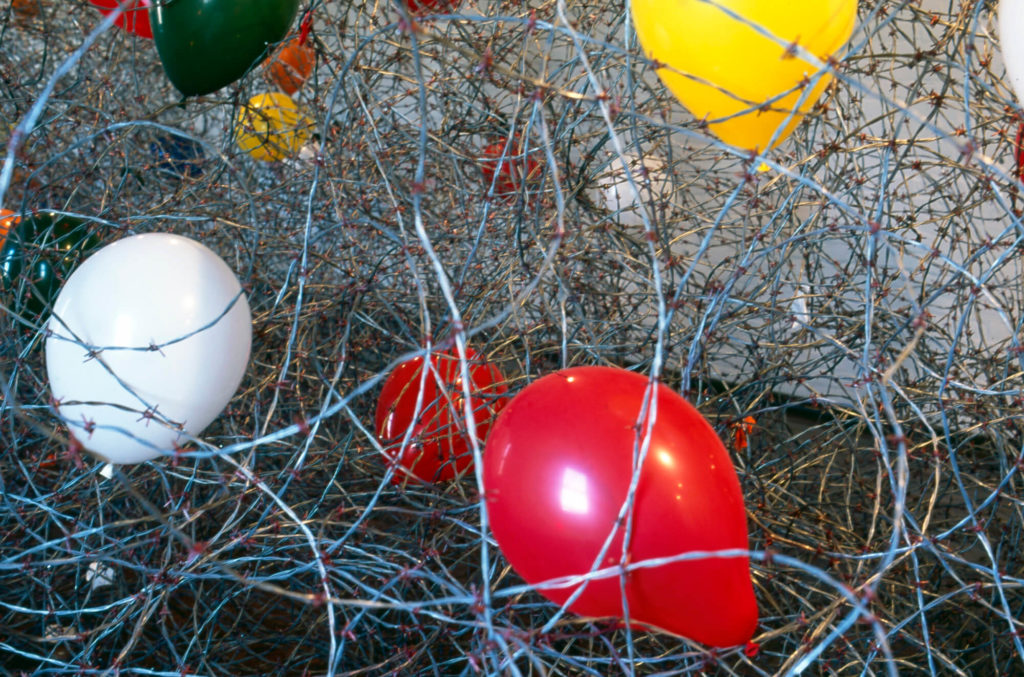 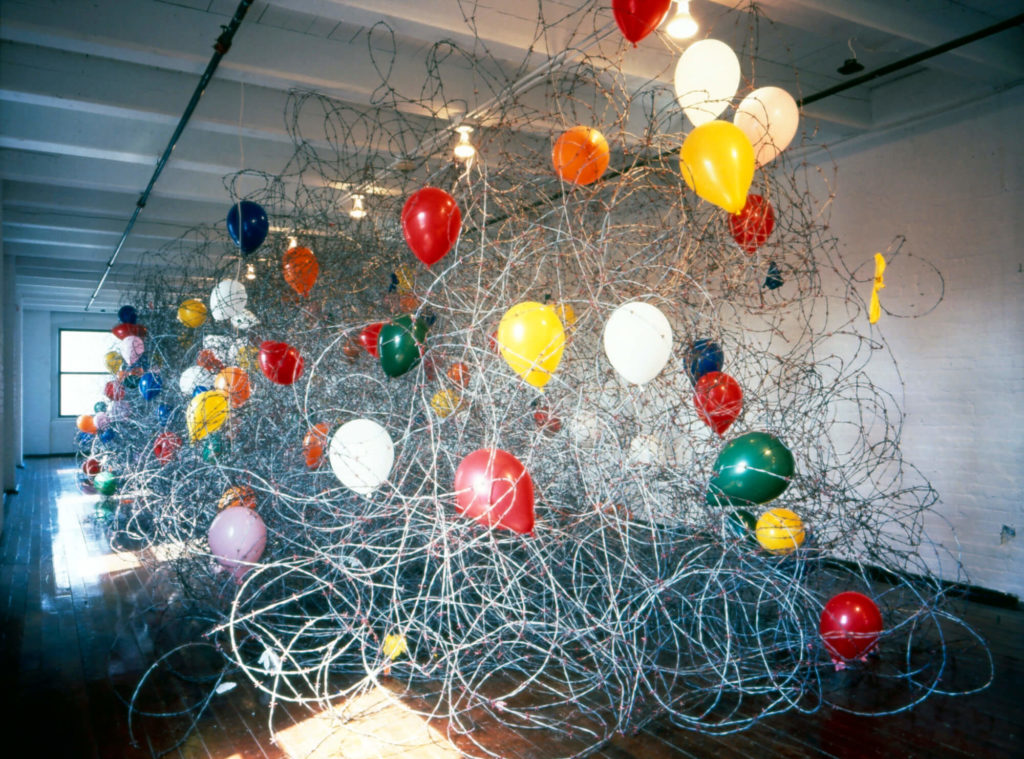 Qin Yufen unwound 5.75 miles of barbed wire into a dense configuration for the installation Beautiful Violence. Pushed into the barbed wire are colorful party balloons. Small speakers are suspended from the ceiling in the barbed wire and Yufen’s composition of balloons being rubbed together and a Chinese bamboo flute are heard traveling throughout the piece.

One essential element of the composition of Beautiful Violence – text – serves as a long distance lens shot, focused on my early youth in China from 1954-1970.  The nationalism that was advocated at the time, the theory of “just war” that was pursued, and large or small political campaigns that were carried out in China rationalized violence. This made a kind of virus of rationalized violence which infiltrates our way of thinking though daily life, and becomes our unchangeable principles when evaluating things. Under the “red” ideology, each of us becomes a carrier of the virus in varying degrees. The written part of this artwork uses the experience of a child’s life to analyze the Chinese model of this phenomenon of viral infection.

Today, in democratic and non-democratic countries alike, violence is on the rise between states, between ethnic nationalities, as well as in daily life.  Particularly in Germany where I live, violent incidents of Neo-Nazism take place one after the other, which shocks me. My work Beautiful Violence is a reaction from myself as an artist toward to what I would call “black” violence. It is not just anger, resistance and worry; more importantly, it is an exploration of the origin and root of this kind of violence. In contrast with “black” violence, “beautiful” violence is the virus of rationalized violence that spreads all over society today. It invades our life through ideology, news media, public education as well as entertainment and consumption in a way that we are not easily aware of. Our infected way of thinking has caused our attitudes and opinions to give black violence space to expand.

The work Beautiful Violence questions the social system and the reliability of our way of thinking. It provides us with a point of entry for thinking, and lets us oppose violence from a more fundamental perspective.

Since the mid-1980’s, Qin has mainly engaged in the creation of installation and land art. Her works often integrate visuals, audio, and symbols of Chinese traditions, as well as modern elements. Qin’s concepts are implied in the poetic atmosphere, as she uses her unique feminine way of expressing the individual aesthetics of self-examination and contemplation. Qin Yufen has exhibited in Beijing, Tokyo, Berlin, and New York, among other international cities.