This project entitled Campus emerges from Pierce s ongoing interest in the college campus as a space of community predicated on shifting levels of... 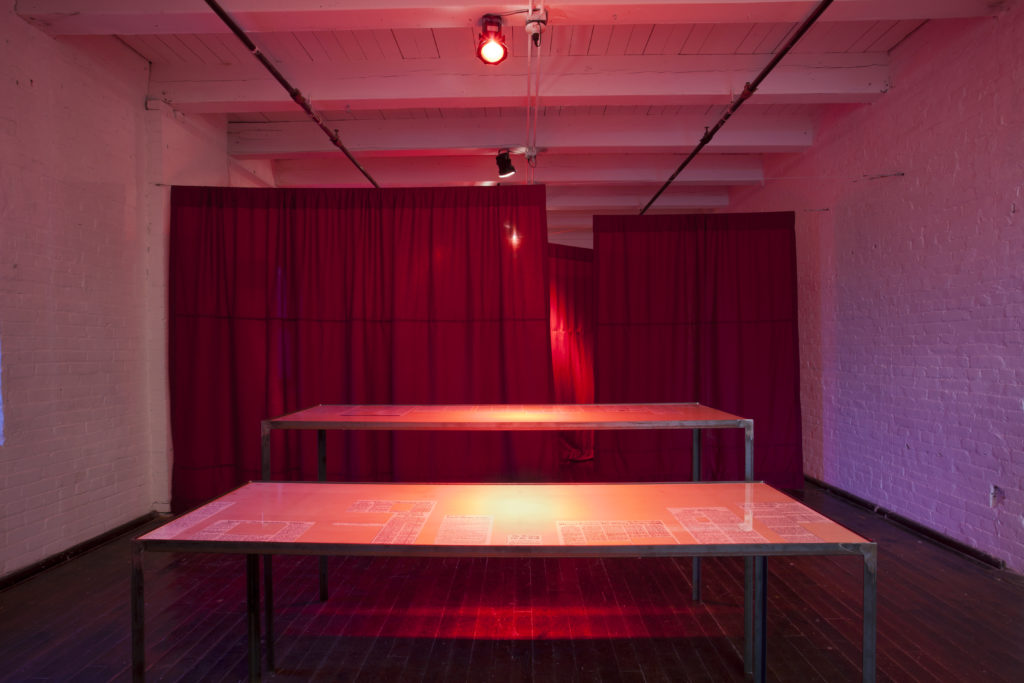 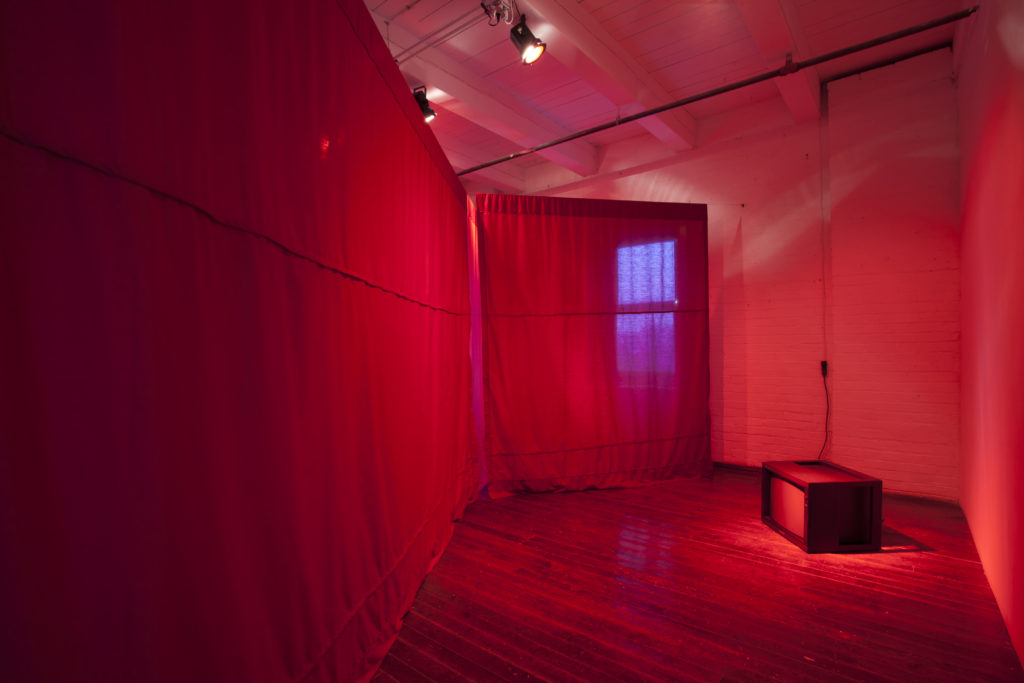 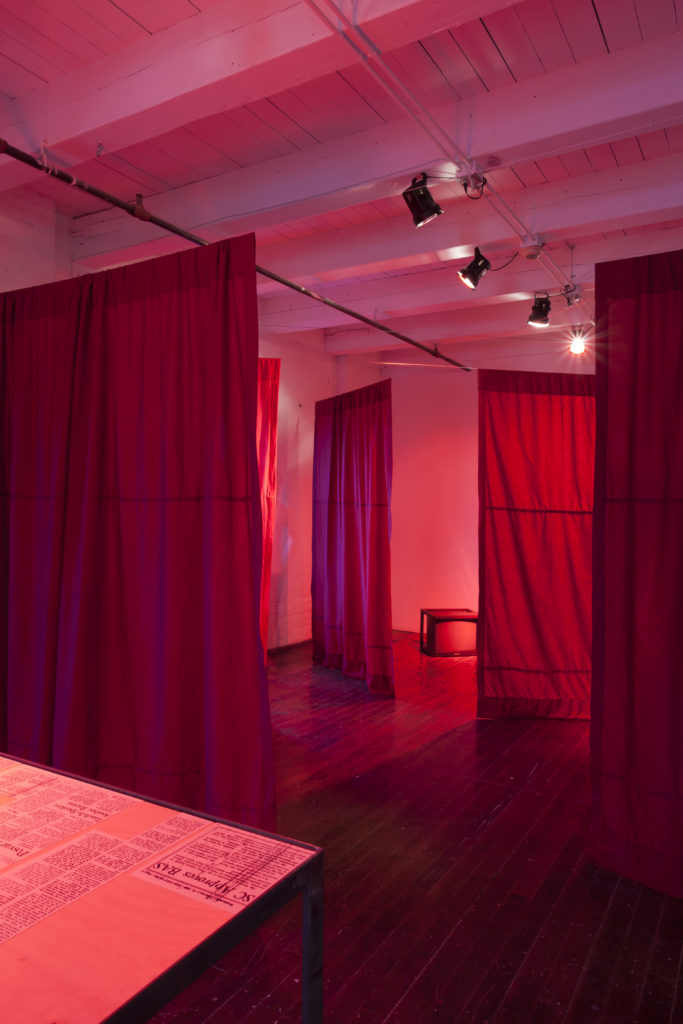 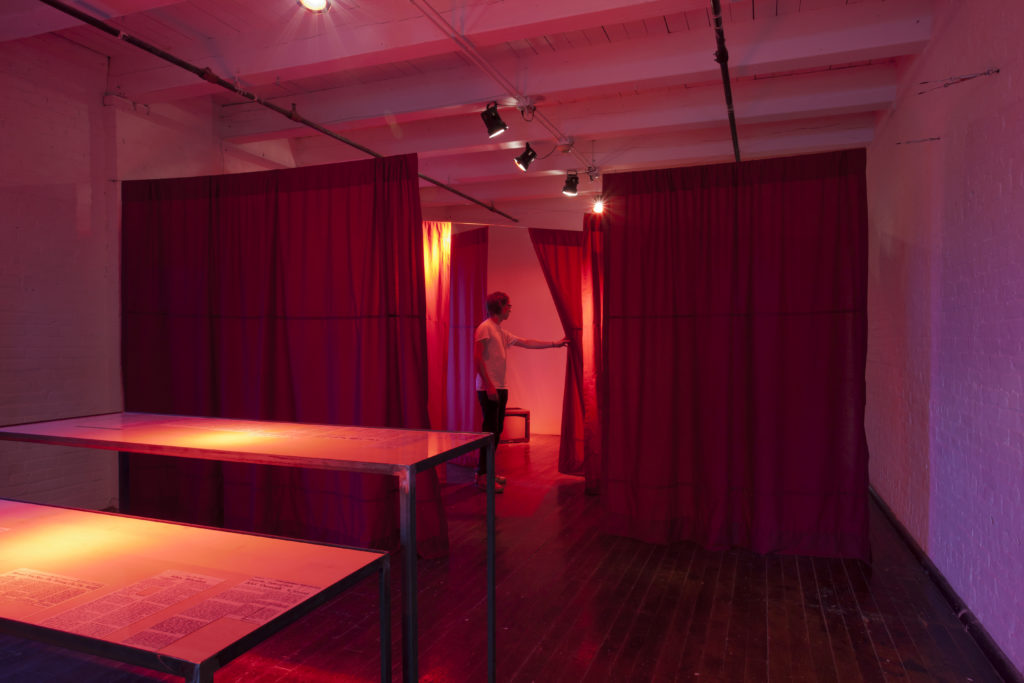 This project, entitled Campus, emerges from Pierce’s ongoing interest in the college campus as a space of community predicated on shifting levels of presence and participation. Pierce focused on the University of Pittsburgh, looking into the decade of transition between 1959-1969, when the civil rights movement merged into, and on some levels became obscured by, the anti-war movement. This work references such activities in presenting selected newspaper clippings from the University of Pittsburgh’s archives, specifically student protests that led to the formal establishment of the Black Action Society (BAS) in 1969. This archive material is presented against the backdrop of a series of large red curtains, and from behind the voice of a woman resonates.

As viewers move through the space, the curtains both guide and obstruct, changing colour in the light and perhaps hinting how with a slight shift in viewing, things become prominent or can disappear. In the far corner a monitor shows a film of a performance by a group of individuals staged during the opening of the exhibition. The performance emerged from a workshop conducted by the artist during which gestures familiar from political protests were acted out along with phrases borrowed from a sculpture class: the female voice belongs to the instructor who tells her students, for example, to “find a place to stand, step back, and look.” Here, Pierce’s interest in the campus merges with ‘being student’—a concept she develops in her work to describe a state of immediacy and engagement in a present moment. As we listen to the art instruction recorded during a sculpture class at Pitt in April, 2011 ideas about technique and observation merge with other acts that involves ‘seeing’ and ‘doing’. If an act is acknowledged through repetition, a gesture, a mark on a page, what role does each individual act play? The objects the students in their studio classroom are observing and creating do not exist within the gallery space, neither do the campus events of 1969; but they are the present in which we exist.

Sarah Pierce uses the umbrella term “The Metropolitan Complex” to describe her art practice. Despite its institutional resonance, this title does not signify an organization. Instead, it demonstrates Pierce’s broad understanding of cultural work, articulated through various working methods, involving papers, interviews, archives, talks and exhibitions. Characterized as a way to play with the hang-ups (read ‘complex’ in the Freudian sense) that surround cultural work, one emphasis is a shared neuroses of ‘place’, whether a specific locality or a wider set of circumstances that frame interaction. Central to her activity is a consideration of forms of gathering, both historical examples and those she initiates. The processes of research and presentation that Pierce undertakes highlight a continual renegotiation of the terms for making art: the potential for dissent and self-determination, the slippages between individual work and institutional context, and the proximity of past artworks.