Dark Side of Light was originally conceived as an analog version of an internet site as media saturated as Paper Rad 8217 s own... 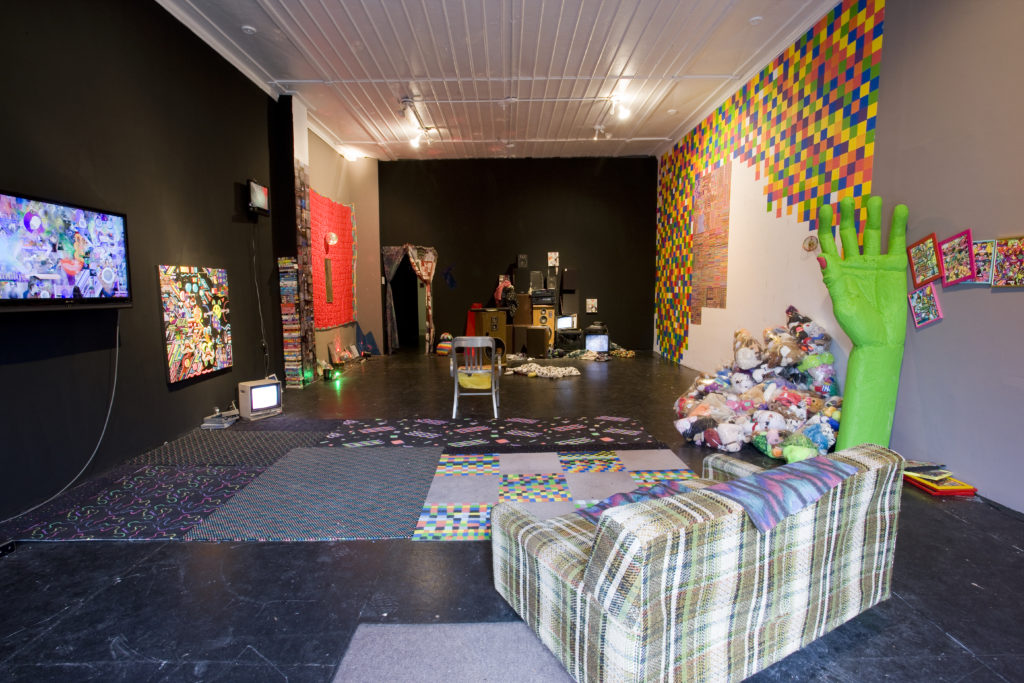 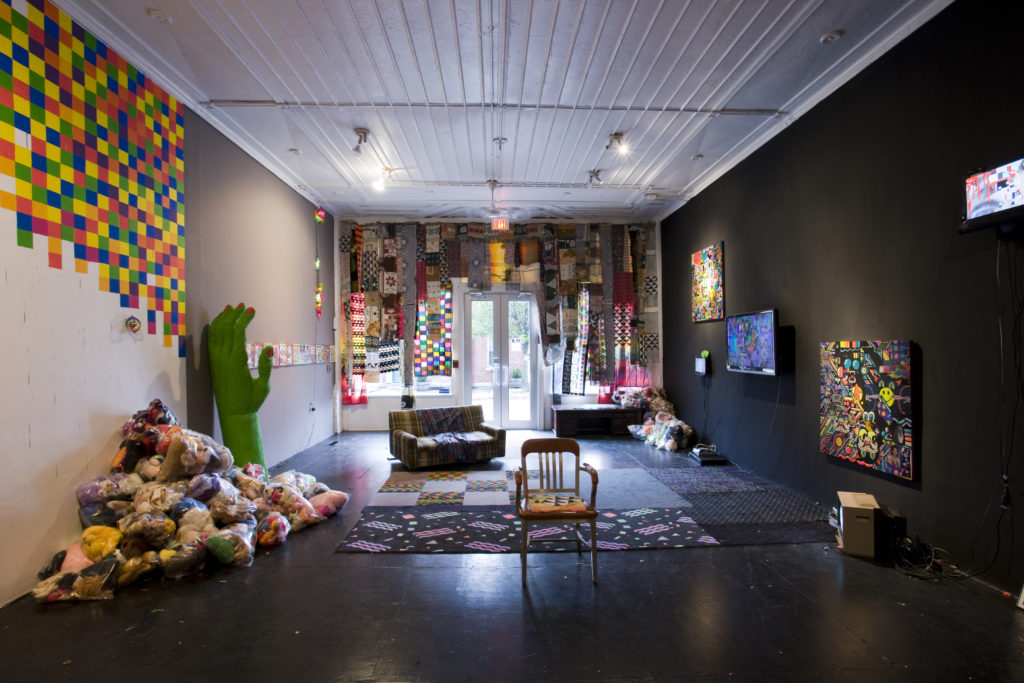 Dark Side of Light was originally conceived as an analog version of an internet site, as media saturated as Paper Rad’s own website. The challenge was to possibly not include any computers, or very little “technology”—but the conceptual frame of the piece changed as Jessica and Jacob Ciocci collaborated at the Mattress Factory. Often, passersby would be selling their second-hand wares, i.e. televisions, radios. Or objects could be found, just a block away, abandoned on the street. A selection of these wares was incorporated into Paper Rad’s final installation. As Jessica recounts: “first day of arriving/found speaker on street and Mickey Mouse sleeping bag on ground which is [now] laying prone to speaker in the [installation] space/both [found] within one block of mattress factory.” Likewise, on the day before the opening, “a man walked by with a shopping cart trying to sell a TV” — there were no takers, except Jessica. She was already working with used televisions — stacking them, along with speakers into a mini Babylonian pile of partial working screens and inconsistent amplification.

Jacob followed suit, but gleaned most of his objects from his own thrift store collection, i.e. old VHS tapes, kept in their boxes and simply stacked in a corner, a slightly ripped, old Magic Eye poster, a tin of loose pocket change. Paper Rad videos abounded (six total) flashing more detritus, appropriated from popular TV shows (especially children’s programs), cartoons, advertisements, and live performances. In the larger Aquos screen work (the only new monitor that doesn’t have its frame smashed), Jessica’s hand, digitally colored by day-glo green, floats by as the recurring, “Hand of God” — this video image is mirrored in a giant floor sculpture on the other side of the room. As Jacob recounts, “I actually wanted to name the whole installation, ‘Entertainment Center,’ because I felt like what Jessica was making was a weird dystopian entertainment center — with the same kind of imagery that I use in my paintings and video, “light entertainment,” or “fluff”—the disposable media aimed at kids, but that ends up in thrift stores because it was never used or watched.”

What Paper Rad does well is directly related to the process for this exhibition, sifting through piles of “junk experience” in order to find the gold. “We try to do this in a way that still retains the ‘junk’ quality of the gems, but — at the same time— are careful not to make something precious, just because we found it on the street or in a thrift store or on a web site.” Likewise, Paper Rad’s approach to “newer” technologies, such as the Blu-Ray, High-Def video utilized for the Aquos flat screen piece is to avoid fetishizing the “new.” Rather, by using it to present initially Lo-Res images in all their gory details, they discipline it or demote it. Or force it to showcase lesser quality image forms: we see each layer of animated .Gifs or youtube junk culled from the internet. Paper Rad exploits the tension inherent between High and Lo Res images that soak our popular consciousness: “Consumer culture accepts, and even relishes horribly compressed, low resolution files over the web, yet demands insanely hyper-realistic, hi-def video for ‘home theaters.'”

Paper Rad is an Art Collective founded by Jessica Ciocci (American, b. 1976) and Jacob Ciocci (American, b. 1977). Jessica Ciocci attended Wellesley College for a B.A. in Studio Art and Psychology. She creates cartoons and vibrant artwork and she tours the country with her music and cartoons. Jacob Ciocci received a BA in Art from Oberlin College where he minored in Computer Science.  He received his MFA from Carnegie Mellon University. Jacob Ciocci works with technology and video remixes as well as paintings.