Diptyching is intended to be a visceral confusing and destabilizing experience The artists play a psychological game with the viewer by presenting a welcoming... 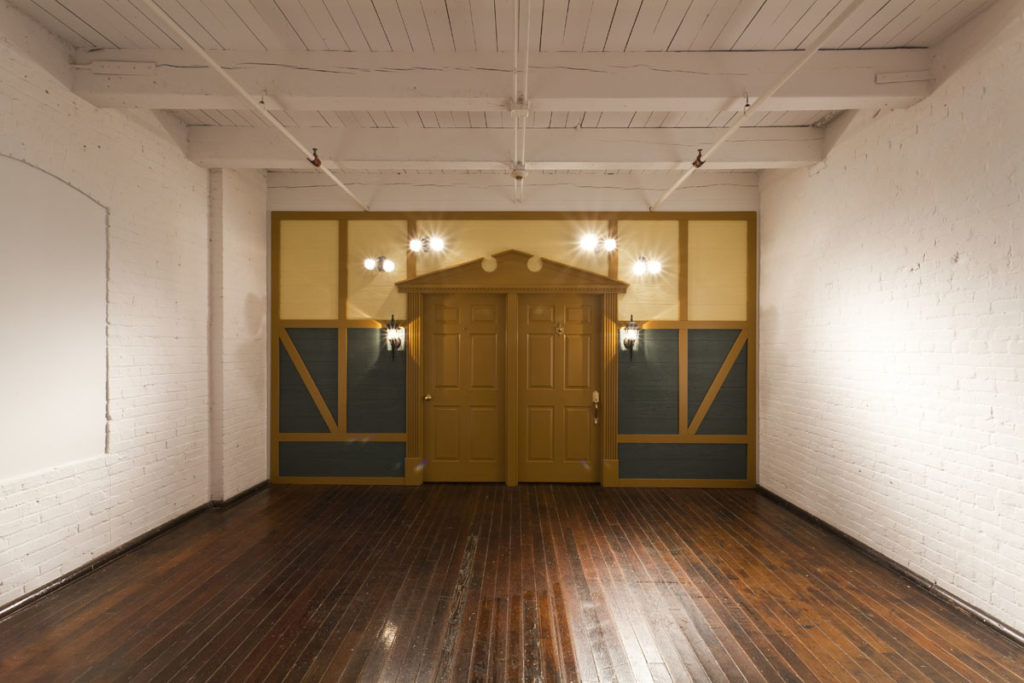 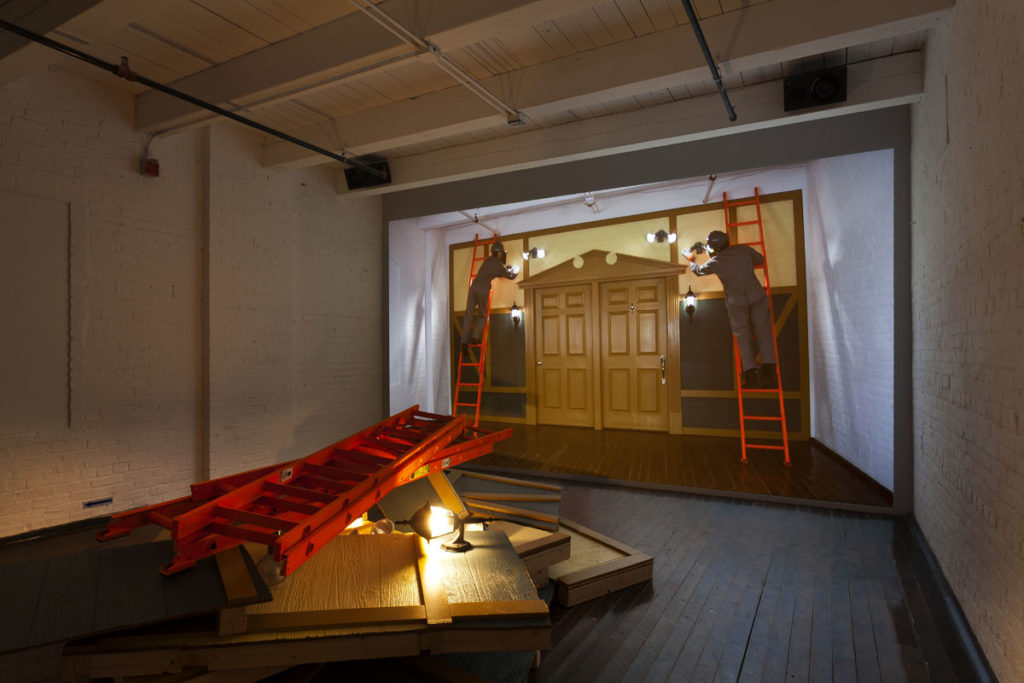 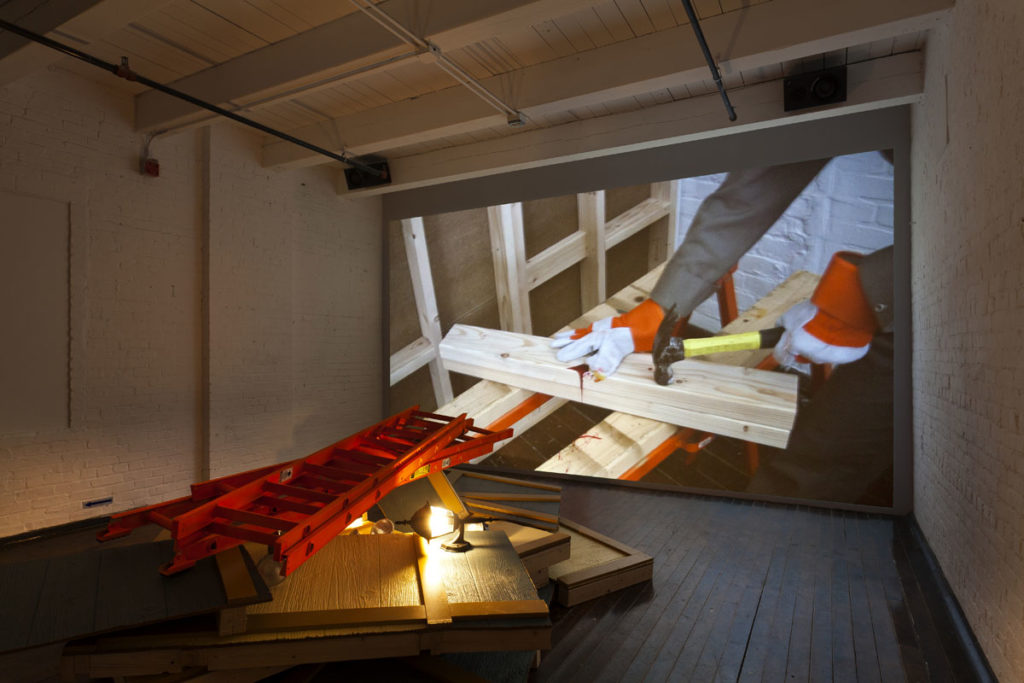 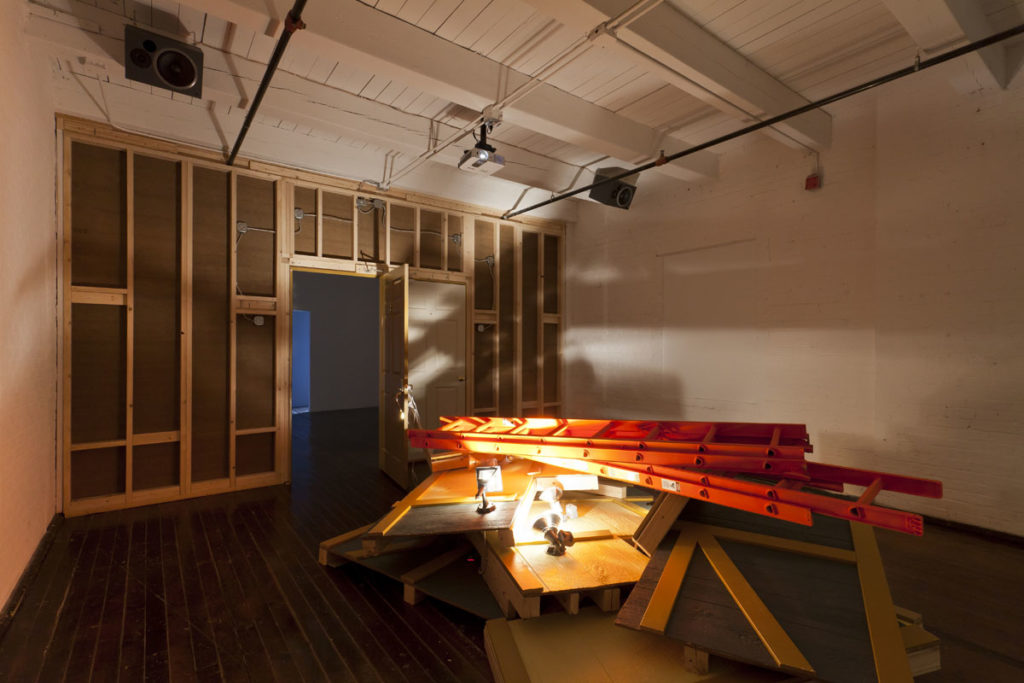 Diptyching is intended to be a visceral, confusing and destabilizing experience. The artists play a psychological game with the viewer by presenting a welcoming (or at least familiar) structure that is attempting to contain a disquieting audio component that is coming from within. An ominous “soundtrack” and an unsettling array of screams and construction sounds challenge and warn the viewer of the impending calamity on the other side. Both entrance and exit doors are equipped with automatic door closures to create a one-way in and one-way out corralling experience. Being corralled forces the viewer to reconsider the meaning of the piece in terms of the viewers own interaction with it and with their own anxieties the piece may invoke. The exterior doors, pilasters and pediment – along with the color scheme – come from a duplex the artists saw during their residency at the Mattress Factory in Troy Hill (a neighborhood in Pittsburgh). Combined with a mini barn mock-Tudor design, the façade represents what the artists refer to as an ever pervasive “contractor aesthetic.”

The video component of this installation piece is part performative document and part comedic catharsis. Kuperus/ Miller laboriously built the initial façade themselves, filmed its Buster Keaton-like fall and its deconstruction (by the duo themselves) – only to rebuild it again with a new built-in psychodrama. Kuperus/Miller play the roles of the overtly fetishized and stereotyped, genderless and buffoonish construction workers; which are part autobiographical and part archetypal. These construction characters personify sexuality, perversion, self-preservation, work, purpose, failure and defeat. While the video is often difficult, painful or unsettling to look at, each scene or vignette plays like a blooper reel of the absurd. The video oscillates between a serious and yet comedic spectacle. The artists believe some viewers will find the video disgusting or unnerving, while others will find it laughable, ridiculous and totally entertaining. Kuperus/Miller are attempting to create a surreal sense of place with equal degrees of the grotesque and the humorous. Enter at your own risk.

Kuperus (American, b. 1975) and Miller (American) have been recording and performing music under the name ADULT. since 1997. They have released five full-length albums to-date and continue to perform live worldwide. ADULT. is a 2013 recipient of a prestigious Knight Arts Challenge Detroit grant. The sound compositions in Diptyching are available on a 12” vinyl record (released under their own label Ersatz Audio) that they have made into a special limited edition pressing of only 313 signed copies (313 is the Detroit area code).