The installation consisted of items collected on walks through wooded areas in the U S The objects were divided into three categories mineral vegetable... 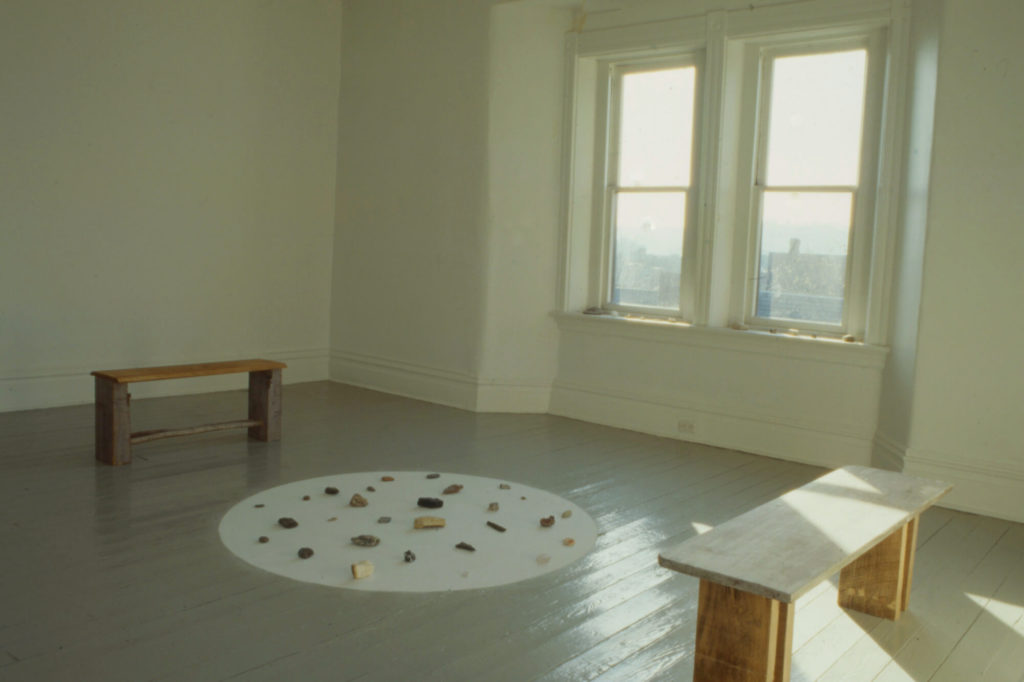 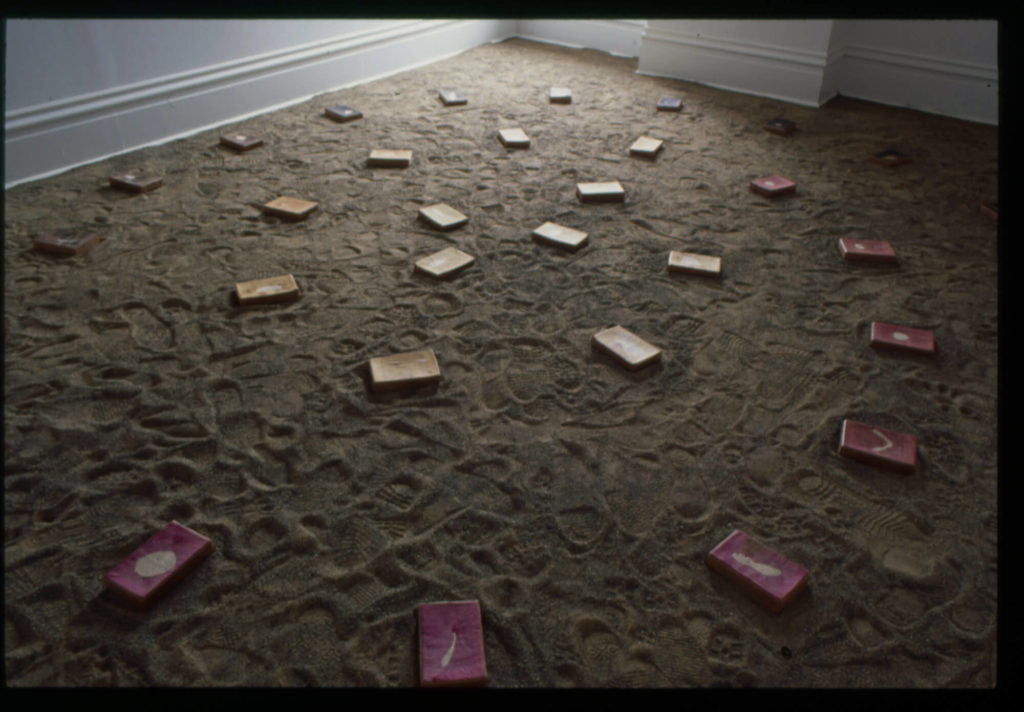 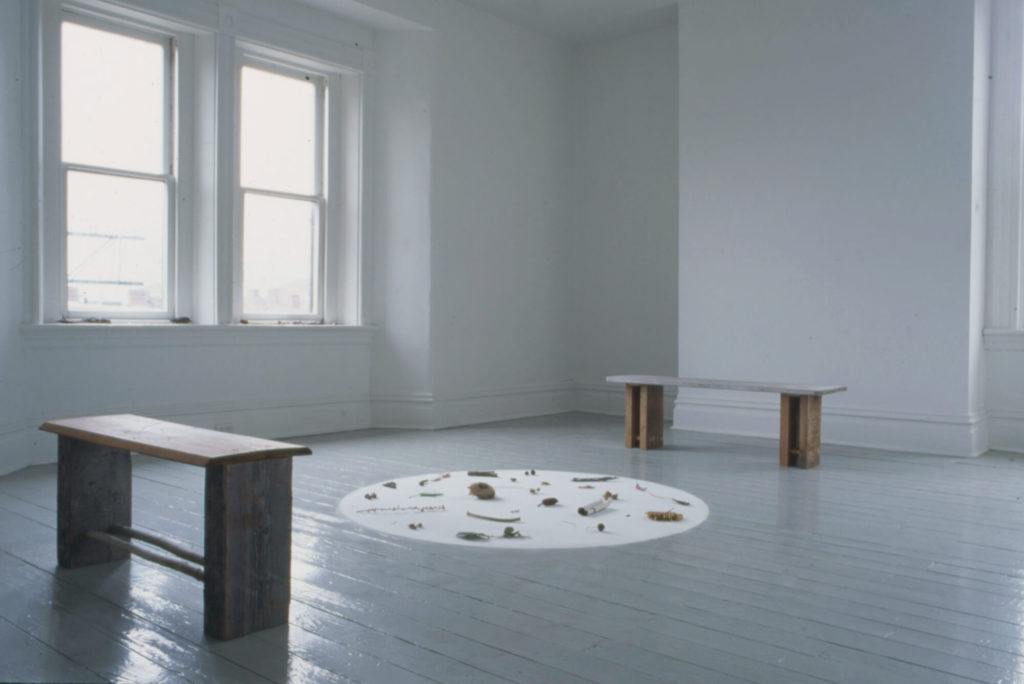 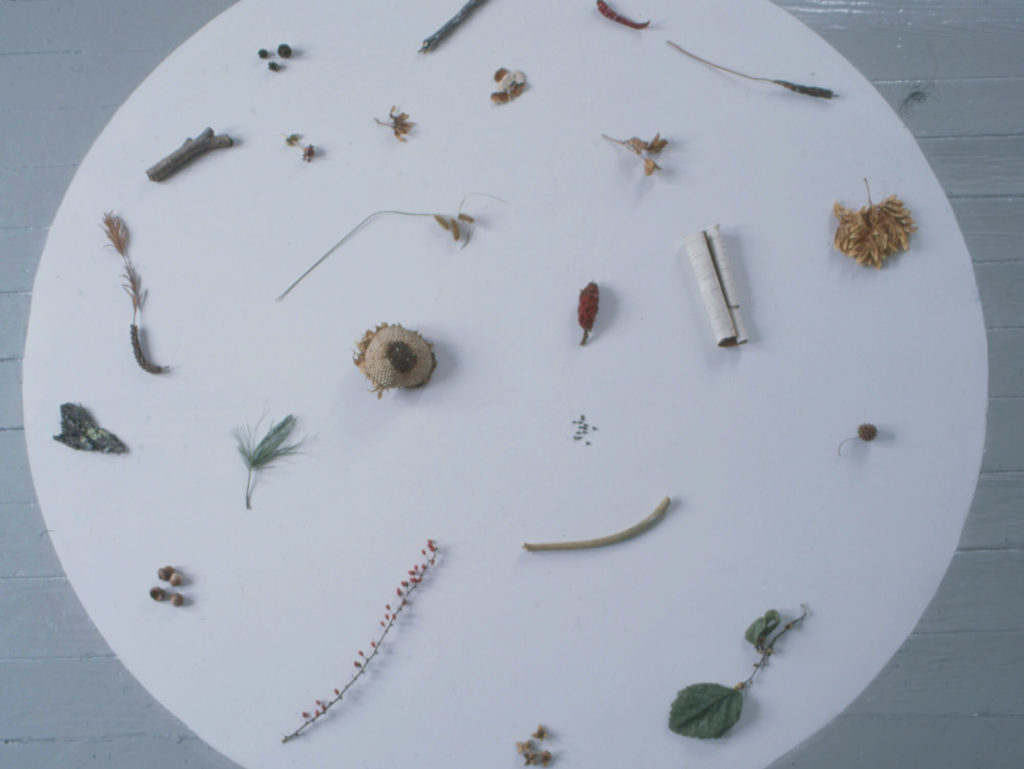 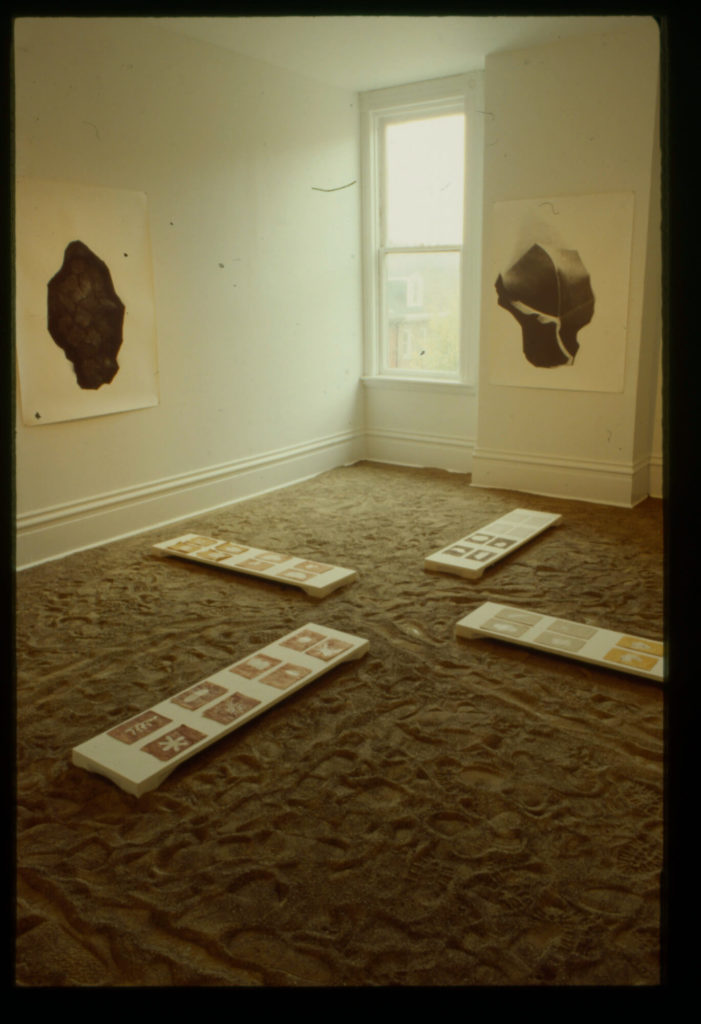 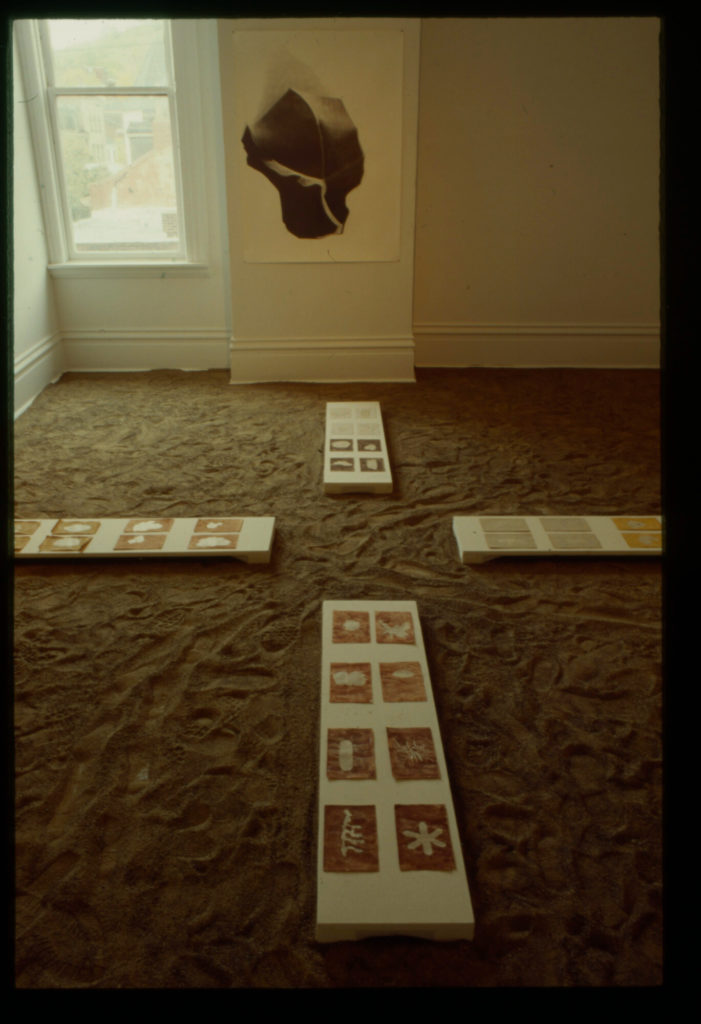 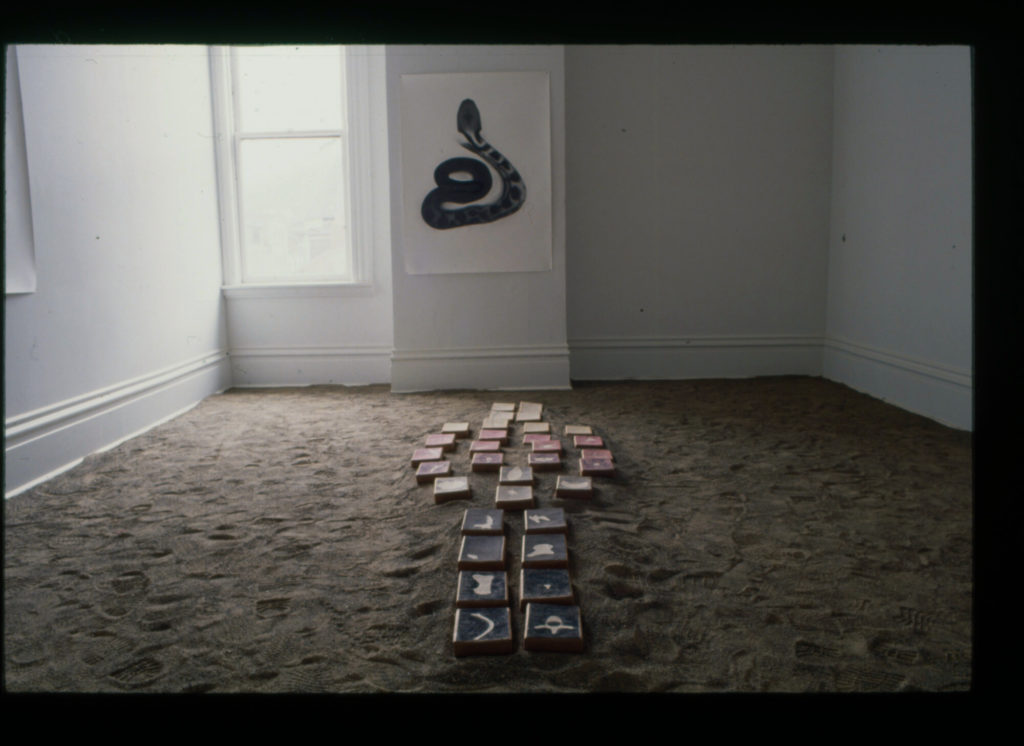 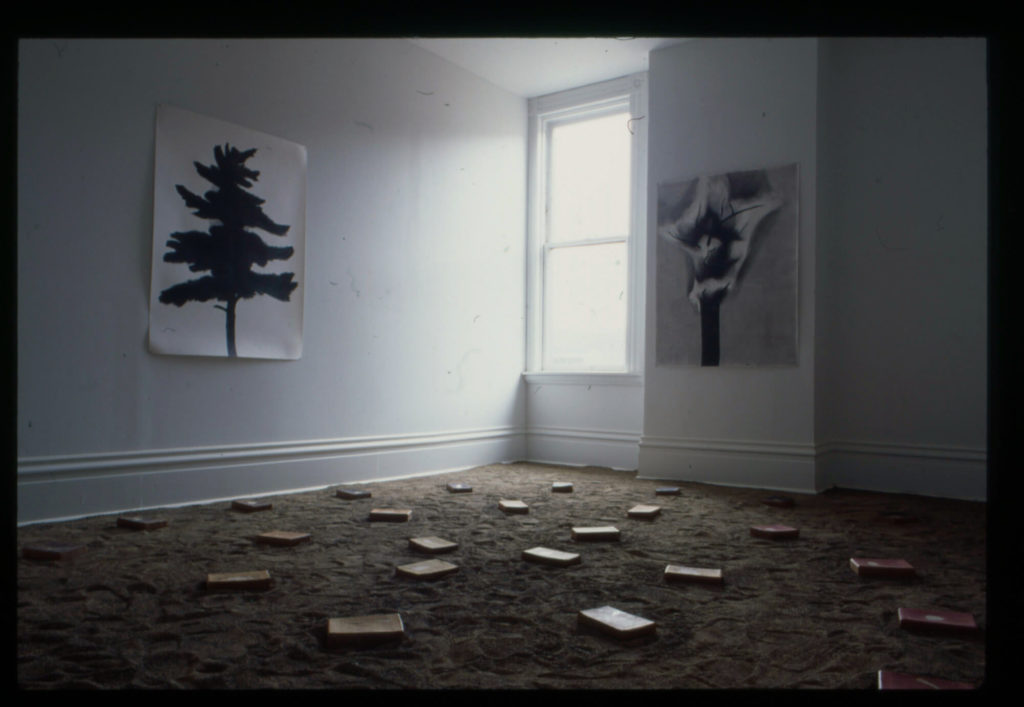 The installation consisted of items collected on walks through wooded areas in the U.S. The objects were divided into three categories: mineral vegetable and animal and arranged throughout the two rooms. The piece was presented in cycles, with the artist working in the spaces prior to each cycle. Temple arranged the found objects on a plaster circle in the center of one room and, in the adjoining room, arranged prints made using pages torn from a Italian edition of Dante’s Inferno. These paintings were mounted on small boxes arranged on a bed of sand. Graphite drawings hung on walls that corresponded to the four cardinal directions.

This work is part of an ongoing exploration into the nature of the elements—air, water, earth, fire—as they move through forms and as they depart, leaving behind their tracks on the dead matter. During the course of several years, in spring, summer, fall, winter, I walked east, south, west, north until a piece of the world spoke to me—animal, plant, mineral. Then either through its form or substance, the exchange was recorded.

The drawings, executed in graphite, are records of form—found and seen—with the sense of a dominant element at work within the body. The small paintings are tracks of the singular, voices of the world’s substance outside of form; the colors are derived from various mineral, vegetable, and animal substances. Assembled in the form of a compass, the singular tracks constitute the beginning of a series of trails, which will move through three separate cycles as time passes.

Each living thing has its own correspondence to the elements, the cardinal directions, the change of seasons, the journey form birth to death. While following one of life’s minute particulars, one becomes an active participant, a tracker. The act of tracking involves a keen awareness of place and time, usually informed by the direction of the wind, the flow of bodies of water, the slopes of the earth, and the journey of the sun. Yet at the moment one achieves a certain understanding of the track ahead, a new impression is added to the trail behind, thus we become the track as well as the tracker.

It is within this active meditation that the individual’s particular track can contribute to a series of collective trails by which one can resurvey the paths drawn between ourselves and the rest of the living world.

Kate Temple received a BFA in Printmaking from Carnegie Mellon University and completed a four-year training in color, based on the work of Goethe and Liane Collot d’Herbois in 2003. Her work has been exhibited nationally and internationally and she is represented in both corporate and private collections. Kate has won numerous awards for her work including an Individual Artist Fellowship from the New York Foundation for the Arts and a recent award from Eco Arts for her installation projects in the spring of 2013. She teaches for Artist Space and lives and works in Manhattan.

harvest(color) or Remedy for Winter Listlessness

The Seraphim Buoy on Archangel Pond

Raphael (a Healing Machine) or The Humming Bird Waltz