The vitrine in the center of the room houses an iron sledgehammer head specifically the type commonly referred to as an Enoch Hammer after... 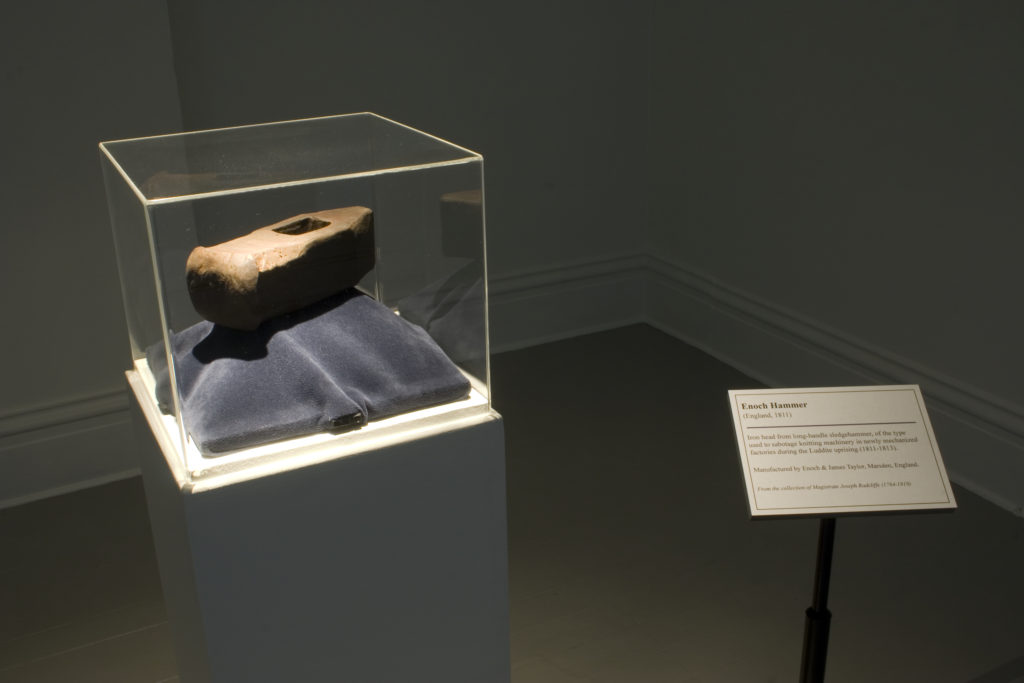 The vitrine in the center of the room houses an iron sledgehammer head, specifically the type commonly referred to as an Enoch Hammer (after its manufacturer Enoch & James Taylor). The tool sits alone in a room kept dark except for a single spotlight on the case. Rendered impotent by its treatment as a relic of a time other than our own, the case is guarded by a security camera on each wall and a proximity-triggered alarm on the case. By rendering this former implement of rebellion safe in a plexiglass box in a quiet and guarded museum, the hammerhead itself can be insured against future inspiration and use.

Artist’s Note: The term “Luddite” is popularly understood as a derogatory label for any person seen as being foolishly resistant to technological progress. The actual Luddite uprising in England (1811-1812) was an organized working class response to the advent of mechanization in the textile workplace, one of the first industries to see steam power replace individual craftsmen and communal work environments. Typically represented as a reactionary backlash by simple peasants to their replacement by more efficient machines, the Luddites are better understood as one of the first organized revolts against the age of industrial capitalism.

Since 1770, the English working class had watched their common farming homelands divided up and fenced in by new and wealthy landlords in a swift sea change historically labeled the Enclosure Movement (the clear precedent for the laws of private property which we take for granted today). These English peasants were fully cognizant of the situation they were in when steam-powered technology began to make it’s way into their lives through factories: another assault on the core of their lifestyle was underway, putting thousands more out of work and destroying the roots of their lifestyle and family bonds. Reacting violently, groups of armed men stormed factories in the dark of night, smashing down the doors and destroying the machines inside. These actions happened in conjunction with food riots in open markets, typically led my women. At the height of the insurrection, some Luddite groups went so far as to attempt the assassinations of factory owners.

The English government moved swiftly to provide state aid to wealthy independent business owners, setting a precedent for the synergistic state relationship with industry and capital observed today. Having already outlawed the beginnings of trade unions (called “combinations”), the destruction of any machine officially became punishable by death in 1812. The pinnacle of Luddite activity saw a standing army of 14,000 English troops, combined with countless volunteer militia, patrolling the countryside and towns where Luddite activity was most concentrated. The organization of these desperate and poor craftsmen was difficult to break, however, as community solidarity kept identities secret even in the face of armed intimidation. The uprising was sustained for less than two years, however, and after a series of overwrought show trials and summary executions and transportations to Australia, the Luddites subsided into history and the state-backed Industrial Revolution ground its way forward.

Shaun Slifer (American, b. 1979) received his BFA in Sculpture from Watkins College of Art in 2003. He is currently working as a multi-disciplinary artist in Pittsburgh, PA.