For unforeseen reasons Brody Condon was unable to complete his residency piece Untitled Meeting After Repin intended to be an addition to his series... 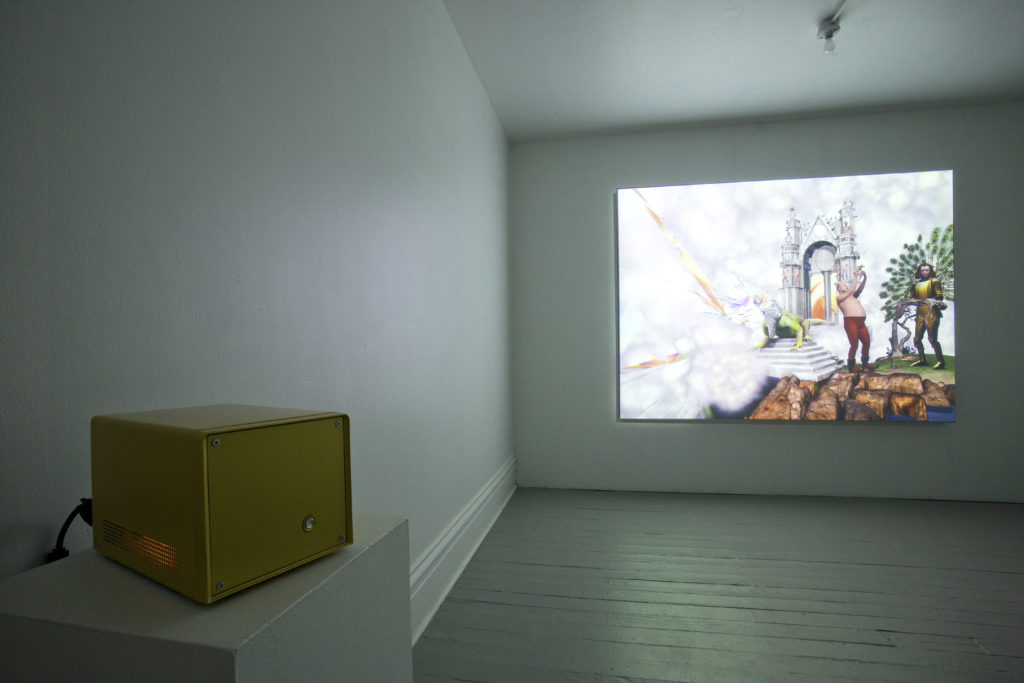 For unforeseen reasons, Brody Condon was unable to complete his residency piece. Untitled Meeting (After Repin) intended to be an addition to his series of self-playing game modifications (Mods). Especially relevant for Condon was the teaming up of two particular sets of historical debates: medieval protestant eschatology and contemporary government conspiracy theories (and apocalyptic millennial predictions). Judgment Modification is inspired by Flemish painter Hans Memling’s The Last Judgment (1467-71), that presented an apocalyptic triptych in which people were either ascending to heaven or being dragged to hell, based on God’s judgment of their moral character. Untitled Meeting was to be based on Repin’s Ceremonial Meeting of the State Council (1903), representing a group of men, primarily loyal to the Czar, who were initially organized by Alexander I as a way to reform Russian parliament. Condon wanted to bring these two works together in order to comment on the historical conflations of fact and fiction within circles of secular and non-secular national leaders: “Although not immediately obvious, there are strong links between the Repin piece and the Judgment, which are made only more relevant by the recent financial crisis. My original reasoning and excitement about moving from late medieval painting about the ‘end times’, to images of men in suits discussing policy, was not just the visual surface of power, but the connections between radical Protestant eschatology and one world government conspiracy theories.” Contemporary fantasy literature and gaming aesthetics often borrow from both medieval and 19th century realist painting — much of Condon’s work exploits these cross-bred forms in order to deliver a complex rendering of contemporary politics and culture. By intervening at the level of hex codes (the six digit representations of computer color codes), scripting systems, gaming engines, Condon merges different historical worlds, as well as gaming strategies. By integrating hacked game algorithms, he recreates a dystopian world of stuttering figures —caught between damnation and transcendence. Known for his earlier mash-ups of games like Half Life (see Condon’s Adam Killer [1999], his modification of the FPS (first person shooter) computer game, Unreal (see Condon’s Karma Physics [2004] and, as part of several collaborative teams, Condon produced Sim (simulation of a real life situation) mods/hacks, such as Waco Resurrection and 9-11 Survivor (2003). The latter works earned him much wrath and condemnation from spectators who felt that he had taken advantage of “real” tragedies in order to create new games. Condon’s interest in gaming as art is deeply connected to his compulsion to explore the architecture and mediated circulation of social violence. It also signals a turning inward—an investigation of his past, constructed from a confusing weave of traumatic events, spiritual experiences and fantastic scenarios. In Condon’s own words: “By moving away from myth and psychedelia and into realist depictions of the surface of power, my hope was get back to something ‘real,’ but I just found myself in another world embedded in fantasy.”

Brody Condon was born in Mexico in 1974. He attended the Skowhegan School of Painting and Sculpture and received his MFA from the University of California, San Diego. Condon also attended the Rijksakademie van Beeldende Kunsten in Amsterdam. His artworks focuses on the use of video games and the aftermath of violence/fantasy. He currently resides in Berlin.