Laboratory for Other Worlds 2019 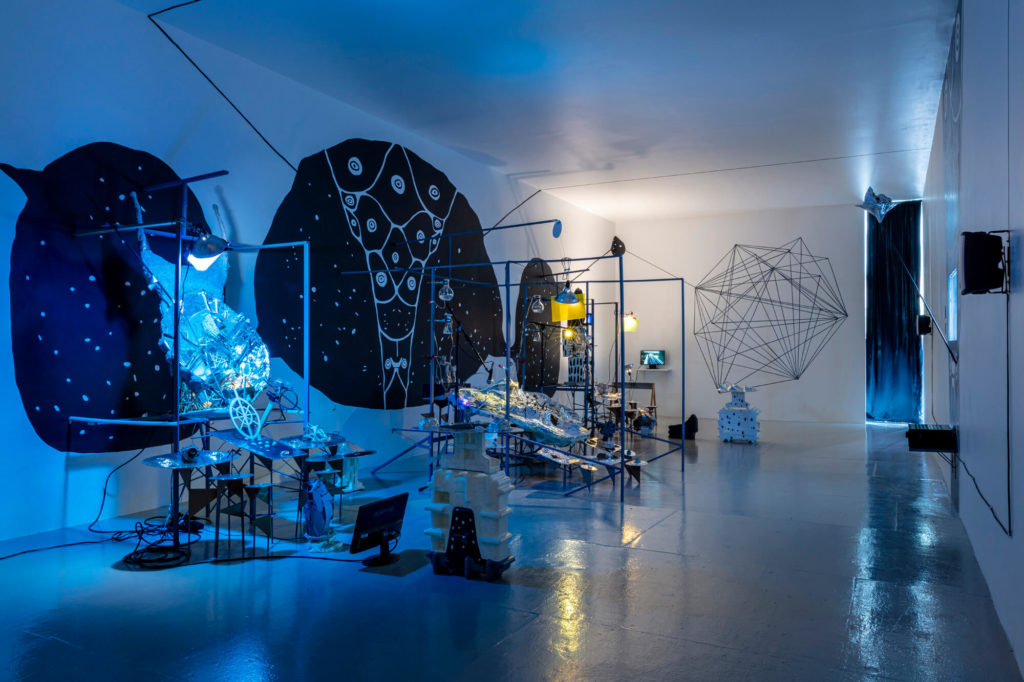 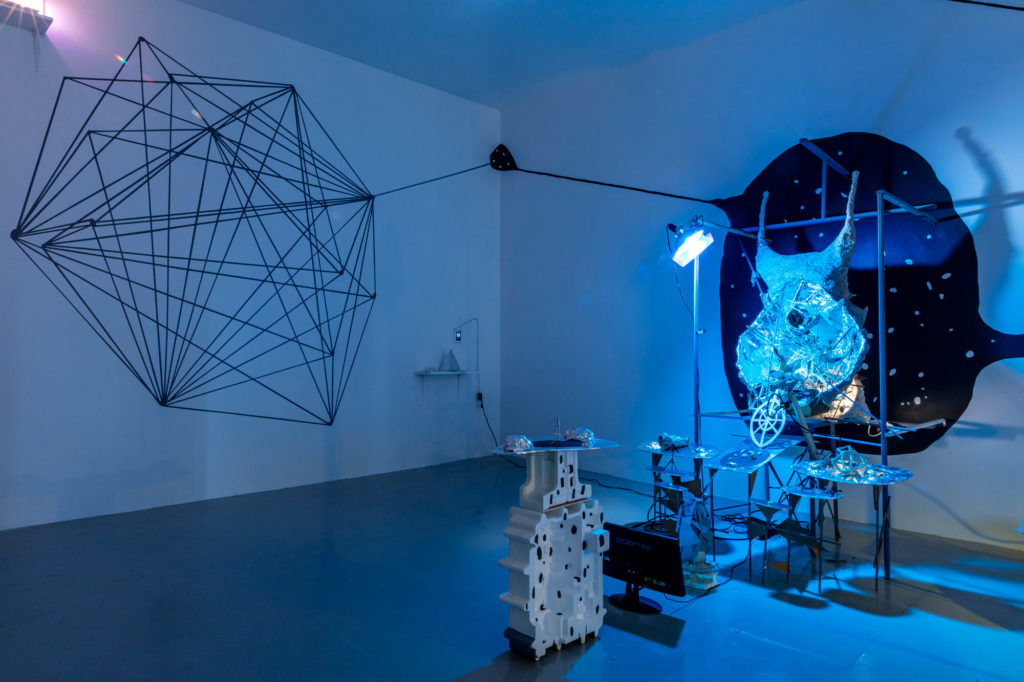 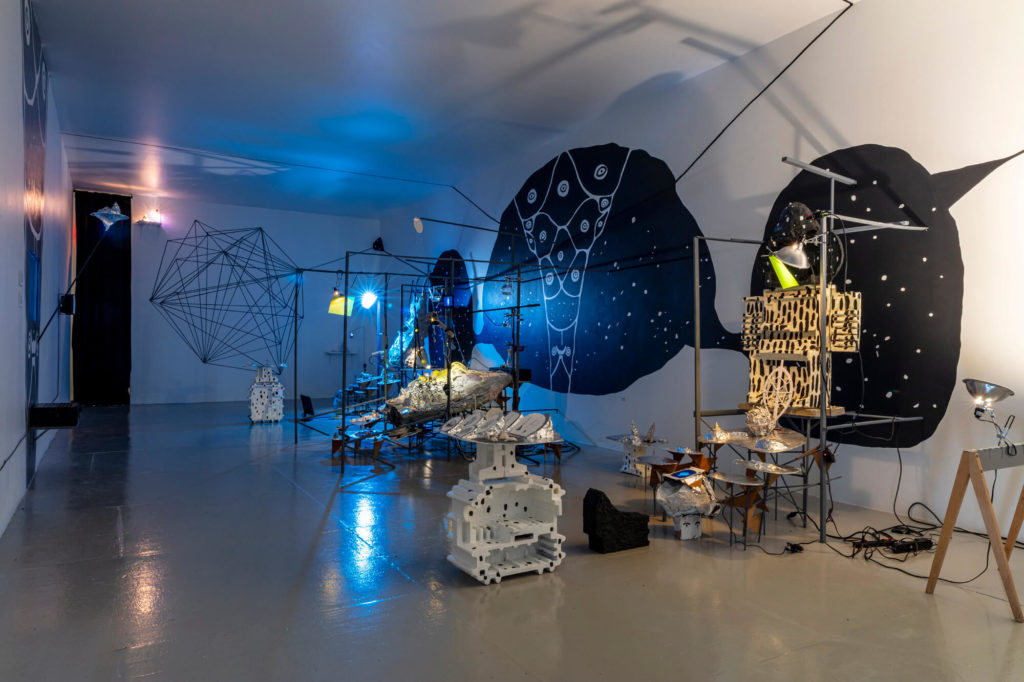 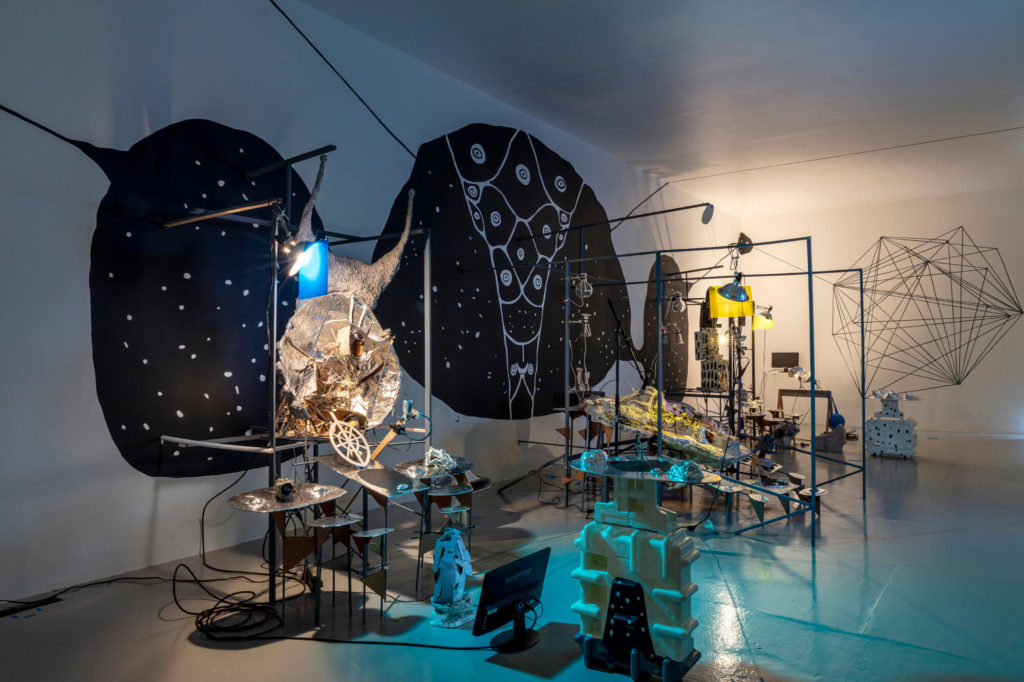 Inspired by broader ideas put forth in recent movements concerning social and environmental justice, this immersive installation approaches the vast number of protentional outcomes of personal/political/societal choices through the analogously constructed form of a science fiction film set.

Following a methodology of surrealist automatism—a process of suppressing conscious control over the process of creating—the formation of the space and its representation display complex, structured, and peculiarly playful relationships between the intuitive and the psychological, between the human body and the subconscious. The piece intertwines hand-built structures, paintings and sculptures made from humble materials with video and audio elements in part by solar panel technology.

Composed in a muted color palette flanked with high contrast, esoteric wall paintings, the imagery suggests mappings for island-like plateaus populated with imaginative forms, lively scenarios, and shifting scale combinations of figurative and abstract elements. Emulating the stark décor/functionality of a science lab, but one existing in an unspecified time or space, Laboratory for Other Worlds posits environments, characters, and materials in a state of observation and/or in a process of formation. The format of a lab allows for the possibility of failure as well as for many things to be happening at once, and by this nature, posits a designated environment for discovery, self-assessment, and interpretation in which the viewer is prompted to form their own connections.

The equipment you see as you enter the installation is part of an off-grid solar panel system. It takes three solar panels to run these three video monitors, which will only run after the sun goes down. They system is comprised of a battery—which stores the electricity generated by the solar panels—along with a controller and inverter that regulates the flow of electricity. If it’s dark outside, and the monitors aren’t playing, it means there hasn’t been enough sunlight recently to keep the battery charged.

Even though it is possible for this small panel system to occasionally fail, solar panel technology has come a long way and is an efficient way to power electrical systems. The best part of using solar energy is that once the technology is in place, people do not need to pay oil/gas companies, or further the exploitation of the earth’s resources to create electrical power. It also substantially decreases the contribution to air pollution or greenhouse gases that cause global warming.

Patte Loper is a painter who experiments with sculpture and video. She was born in Colorado and grew up in Tallahassee, Florida. She currently lives and works in Brooklyn, NY and Boston, MA where she is on the faculty of the School of the Museum of fine Arts at Tufts University. She has shown her work in numerous exhibitions internationally, including the Drawing Center in New York; The Bronx Museum; The Licini Museum in Ascoli Piceno, Italy; LMCC’s Art Center on Governor’s Island New York; and the Zuckerman Museum in Atlanta, GA. Her work is in the collections of the Rene di Rosa Foundation, the Microsoft Corporation and the Hirshhorn Museum. She has participated in residency fellowships at the Millay Colony, Constance Saltonstall Foundation for the Arts, Virginia Center for the Creative Arts and Lower Manhattan Cultural Center’s Swing Space. Loper was a participant in the Drawing Center’s Open Sessions Program 2014- 2016 and is currently a member artist of the Elizabeth Foundation for the Arts Studio Program.

A Second Selection from the Greer Lankton Archive of the Mattress Factory, 1975 – 1996