In the 1950s, Czechoslovakia’s streets were full of words painted on banners with political slogans. These were the cruelest years of communist totalitarianism. 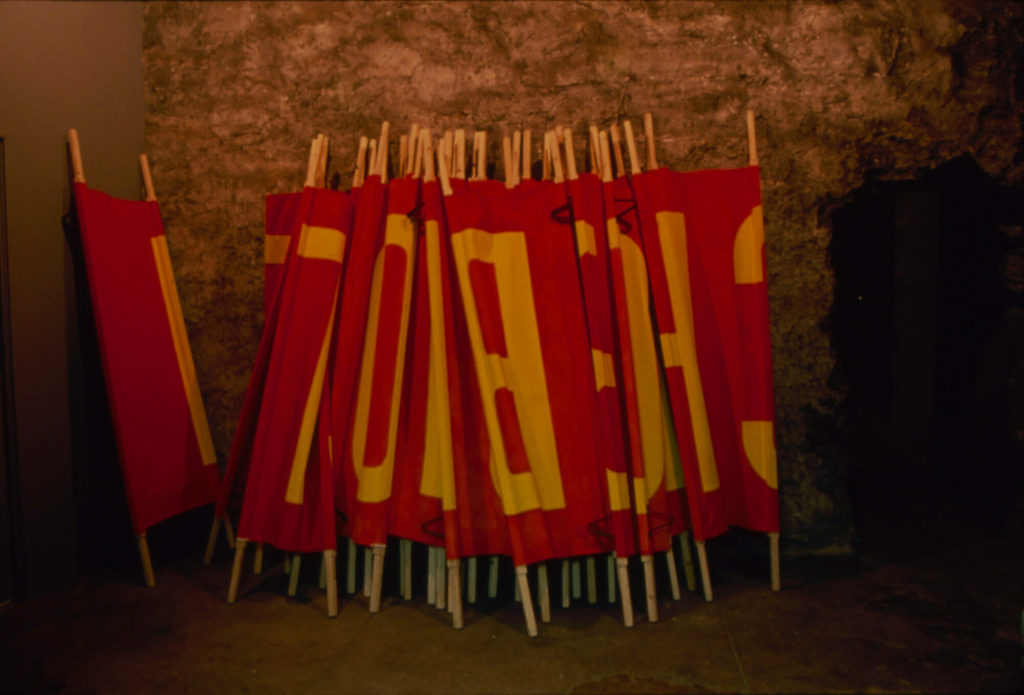 A banner with a political slogan on it (170 cm by 1,800 cm, red on yellow canvas) is cut into twenty parts and, from these, twenty stretchers are made. The state of their presentation is temporary storage. In the 1950s, Czechoslovakia’s streets were full of words painted on banners with political slogans. These were the cruelest years of communist totalitarianism. The 1950s are the period of my childhood. For me they are the most beautiful part of my life. Can one bear a grudge against one’s childhood just because it took place against a background of lies?

“Dezider Tóth has been deeply involved with the word and its relationship to the nonverbal. He creates optical poems that express the silences that dominated his culture and his own life. Tóth’s childhood paralleled the cruelest years of communist totalitarianism in which Czechoslovakia’s streets were full of painted banners with political slogans. During this time he lived in a strict monastic atmosphere dominated by forbidden Catholic rituals. Believers secretly gathered at his parent’s home for the blessing of grain, the last rites, processions, pilgrimages, and baptisms. These events left a profound impression upon him, and he was greatly influenced by liturgical texts. As a child, he was fascinated with the power of the written word and voraciously read poetry, novels, and newspapers.” -Geraldine Ondrizek