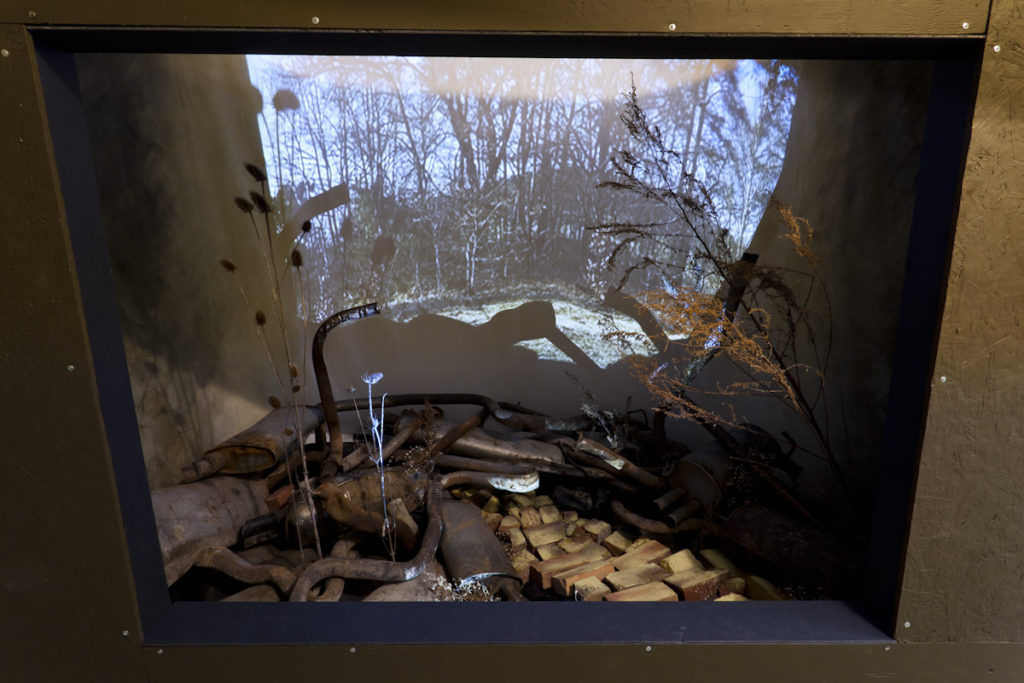 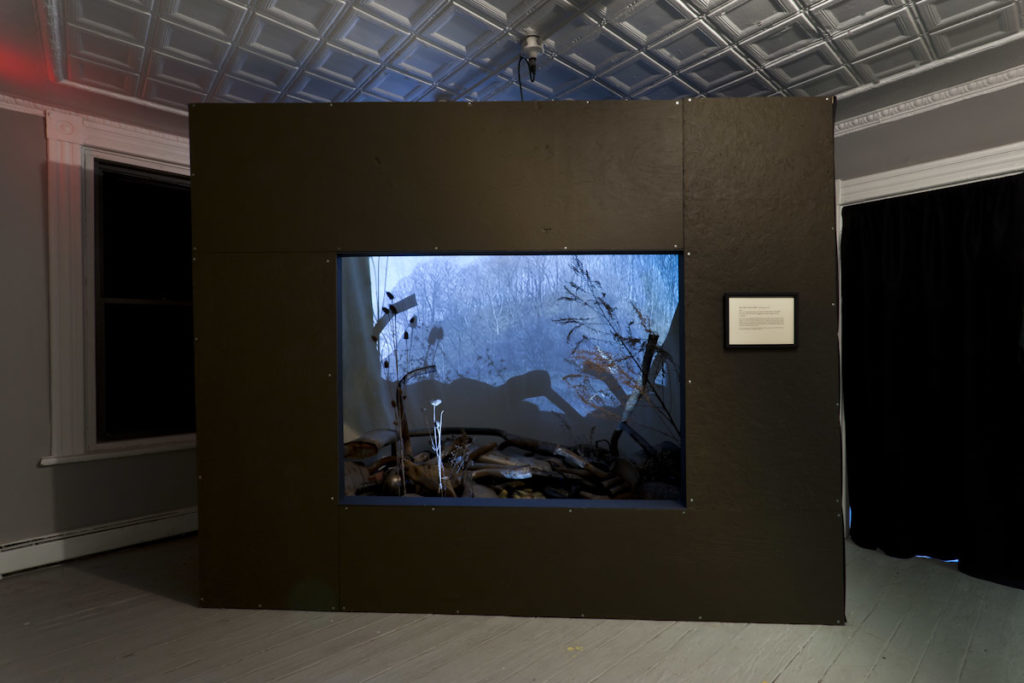 Hot Spots: What Comes After Oil? is an international collaboration exploring the paradigm shift required to envision life- enhancing economies and wise use of our natural resources. Within the frame of a ‘natural’ history diorama, we compose a question forged from the remains of our carbondependent world. Traces of a yellow brick road lead to an abandoned landscape captured in Pittsburgh; Nuremberg, Germany; and Dubai. Visitors are invited to consider this historical moment where past and future converge and the possibility to change course exists.

Karin Bergdolt (American, b. 1968) finished her studies with a master diploma at the Academy of Arts in Munich in the class of Nikolaus Gerhart. Since presenting her three-week performance and installation, “I CHOOSE THE PLACE OF WORK MYSELF” at the former frontier building in Germany-Austria in 1998, her work has addressed the use and organization of (public) space. In 2002, she established the initiative P.L.A.N. – a concept that is intended to work for the intellectual and sensorial reorganization of places and space, and which functions in an interdisciplinary and participatory way. Karin resided in Pittsburgh with her family for six months supported by an artists’ grant through the Bavarian government. Prior to her visit and while she was in Pittsburgh, she formulated “Hot Spots: What Comes After Oil?” with Ann Rosenthal and Elizabeth Monoian. Her Hot Spots highly successful installation in a former gas station in Nurnberg last summer featured a month of public programs, including lectures and workshops for all ages. She recently received a one-year-stipend for the promotion of equal opportunity of women’s rights in university and career. Over the last five years, Ms. Bergdolt has had five solo shows throughout Germany, and numerous group shows, including in Pittsburgh at Fe Gallery, ArtUp, and the Three Rivers Arts Festival.

Ann T. Rosenthal (American, b. 1950) brings to communities 30 years experience as an artist, educator, and writer. Her art installations address the local manifestation of global concerns, including climate change, food safety, and nuclear waste. Over the last few years, her work has been shown at the Andy Warhol Museum in Pittsburgh, Exit Art and the Hudson River Museum in New York, the Schuylkill Center for Environmental Education in Philadelphia, and Kunsthaus Kaufbeuren in Germany. From 2006-2009, she directed the Community Trail Art Initiative, partnering with trail organizations and post-industrial communities to reconnect citizens, educational institutions, and youth to their forgotten waterways as sites of common experience, history and possibility. Her essays and work on eco/community art have been published in several journals and anthologies, most recently in Blaze: Discourse on Art, Women and Feminism, edited by Karen Frostig and Kathy A. Halamka (Cambridge Scholars Publishing, Newcastle, UK, 2007) and Arts for Change: Teaching Outside the Frame by Beverly Naidus (New Village Press, CA 2009). Ms. Rosenthal teaches environmental art and design at the Art Institute of Pittsburgh and Plymouth State University, NH. She received her MFA from Carnegie Mellon University in 1999.

Elizabeth Monoian (American, b. 1969) is currently based in the United Arab Emirates and is Assistant Professor at Zayed University working with young Emirati women to build a rich contemporary art and design movement that is unique to the region. She is the Principal and Co-Founder of the Land Art Generator Initiative (LAGI). LAGI is a worldwide public arts initiative that offers the opportunity for collaborative teams of artists, architects, landscape architects and designers, working with engineers and scientists, to create new ways of thinking about what renewable energy generation looks like. The LAGI project calls on design teams to conceive of large-scale public artworks for specific sites that, in addition to their conceptual beauty, also have the ability to harness clean renewable energy from nature, convert the energy to electrical power, and distribute the power to the utility grid of the city. The project has received featured articles in numerous local and international press outlets, including The New York Times and Dwell Magazine. Her work has screened and exhibited internationally in venues including: The First Biennial of Oran, Algeria; Video’ Appart, International Video Art Biennial, Paris & Dubai; the XXIII Moscow International Film Festival, Moscow, Russia; Anthology Film Archives, NYC; Open Screen Belgrade, Belgrade, Serbia; Festival of Actual Kino, Novosibirsk, Russia; The Kiasma Museum of Contemporary Art, Helsinki, Finland; and the International Media Art Festival at the Armenian Center of Contemporary Experimental Art, Yerevan, Armenia. Elizabeth received an MFA from Carnegie Mellon University.

X3: Cubic Influence on Western Culture and the Collective Unconscious, 1637-1995