How do we present ourselves in and through our homes? What identities do we assume and project in our domestic space? A Guyanese-born artist living in Pittsburgh, Gavin Andrew Benjamin explores code-switching and the fashioning of self-identity. 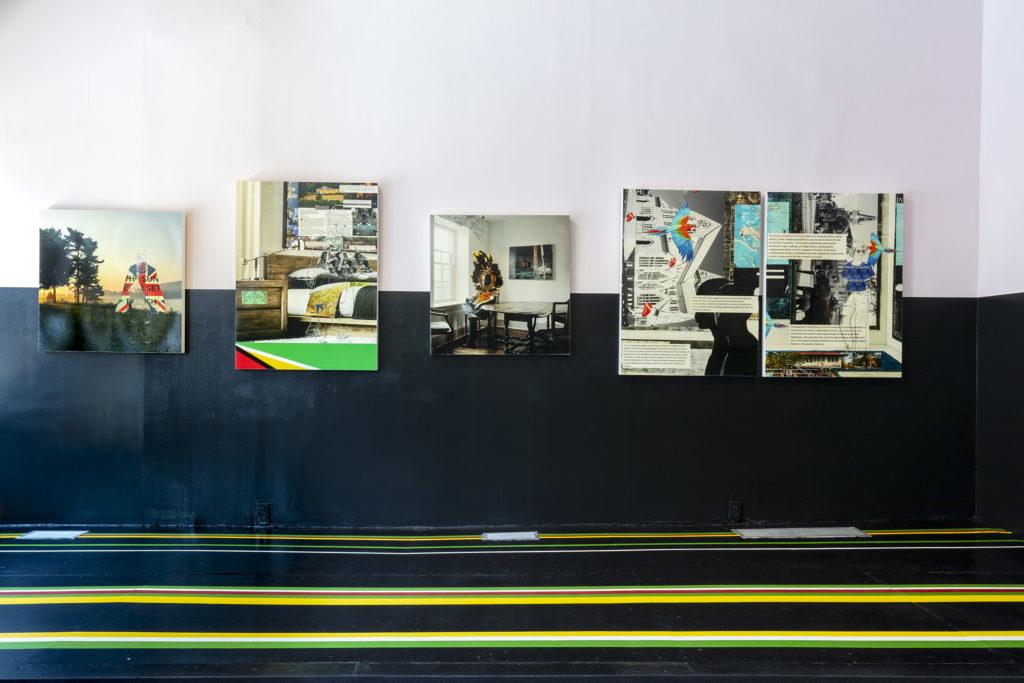 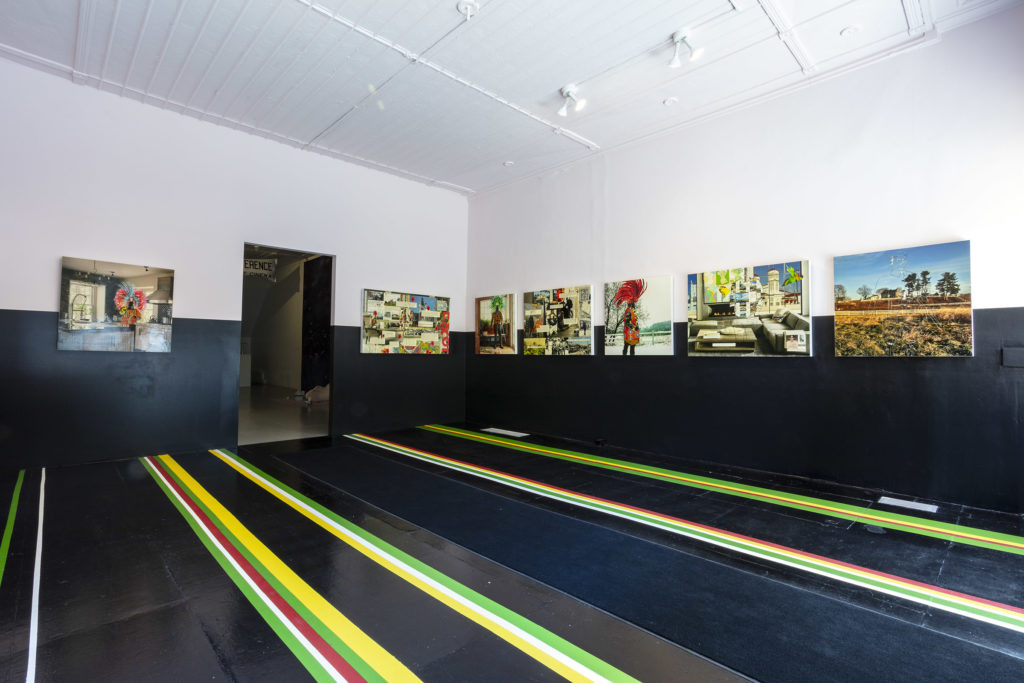 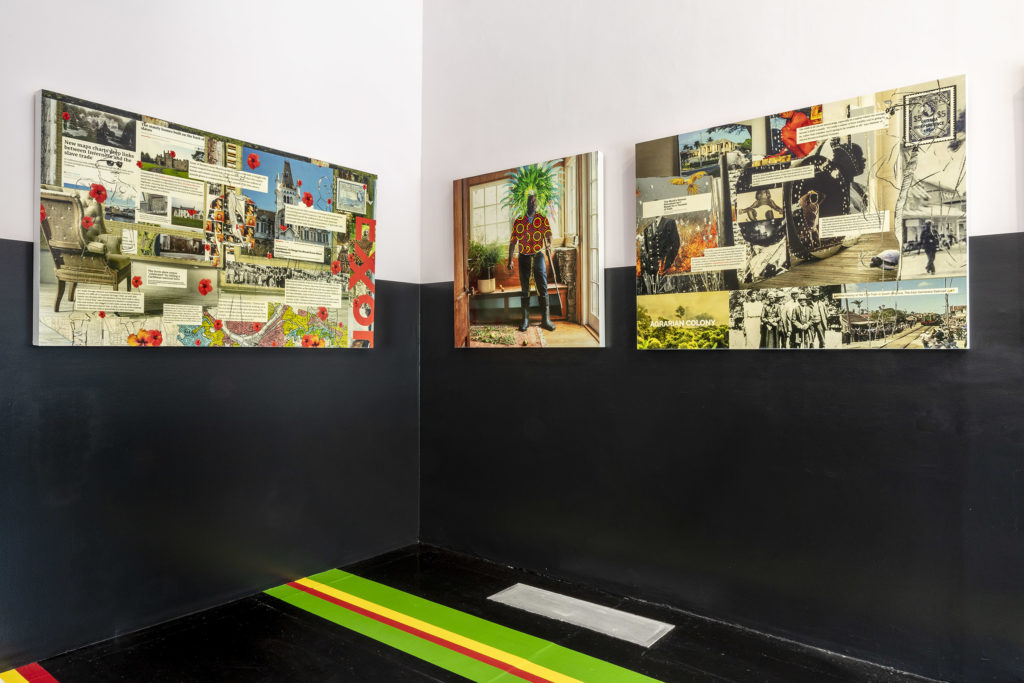 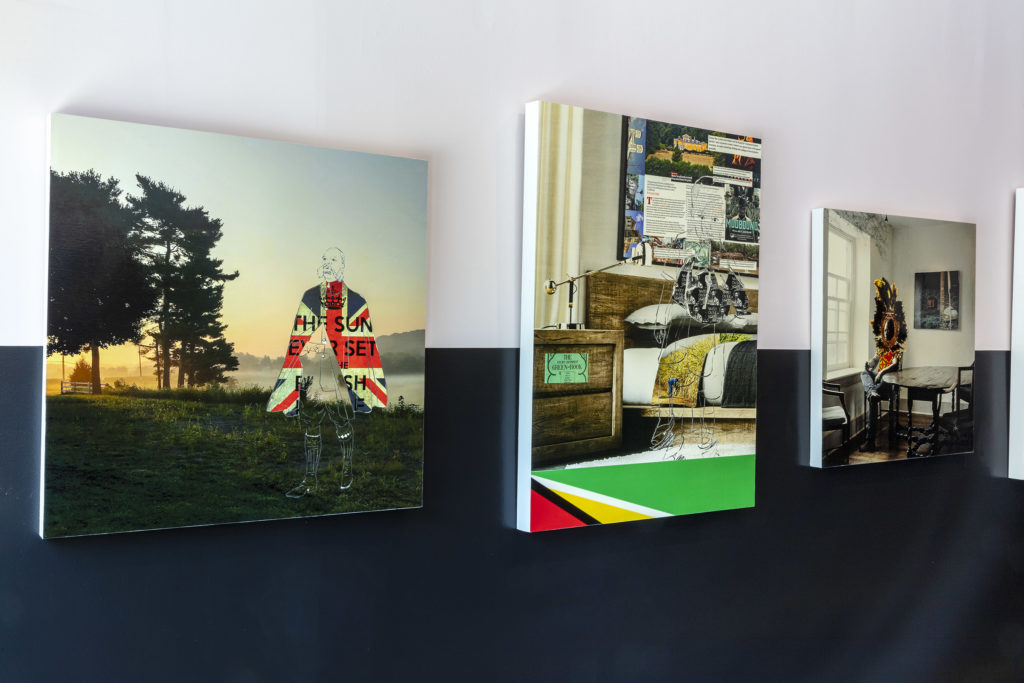 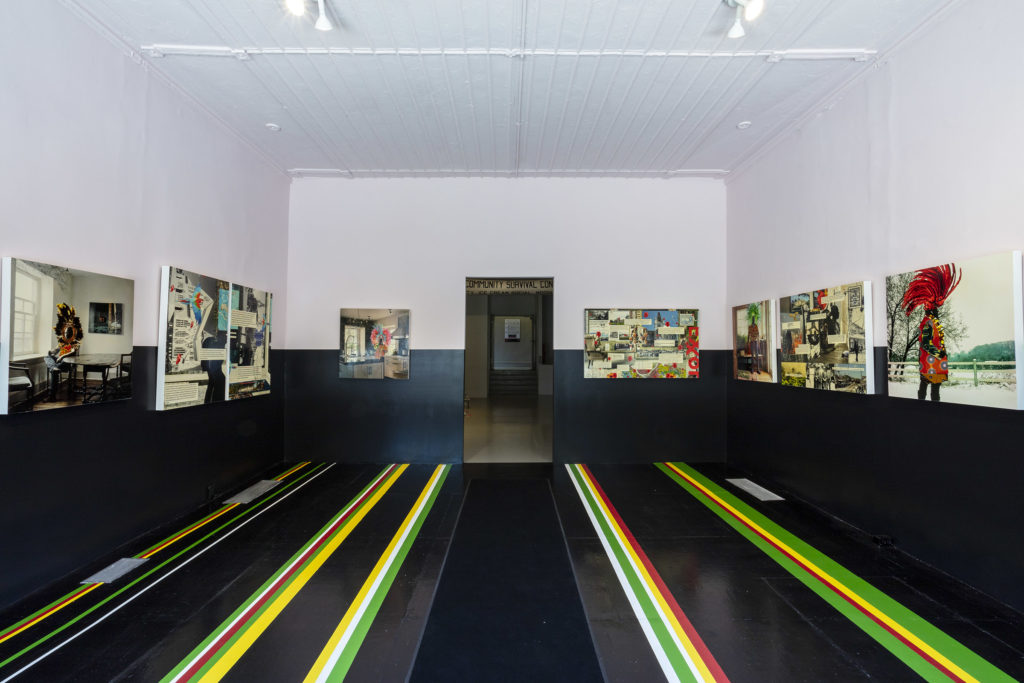 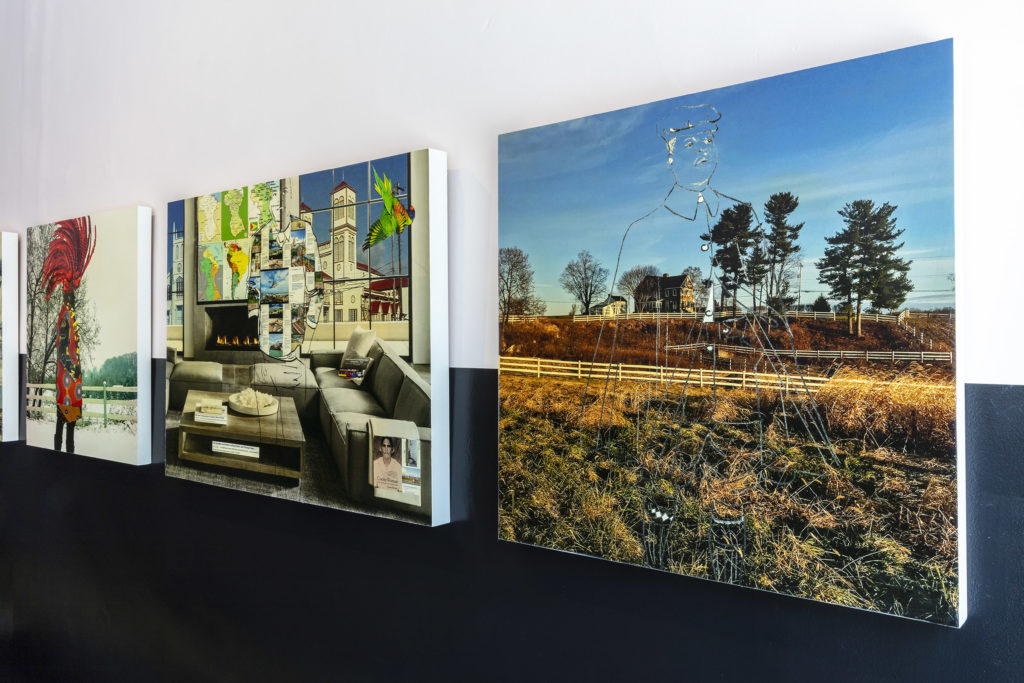 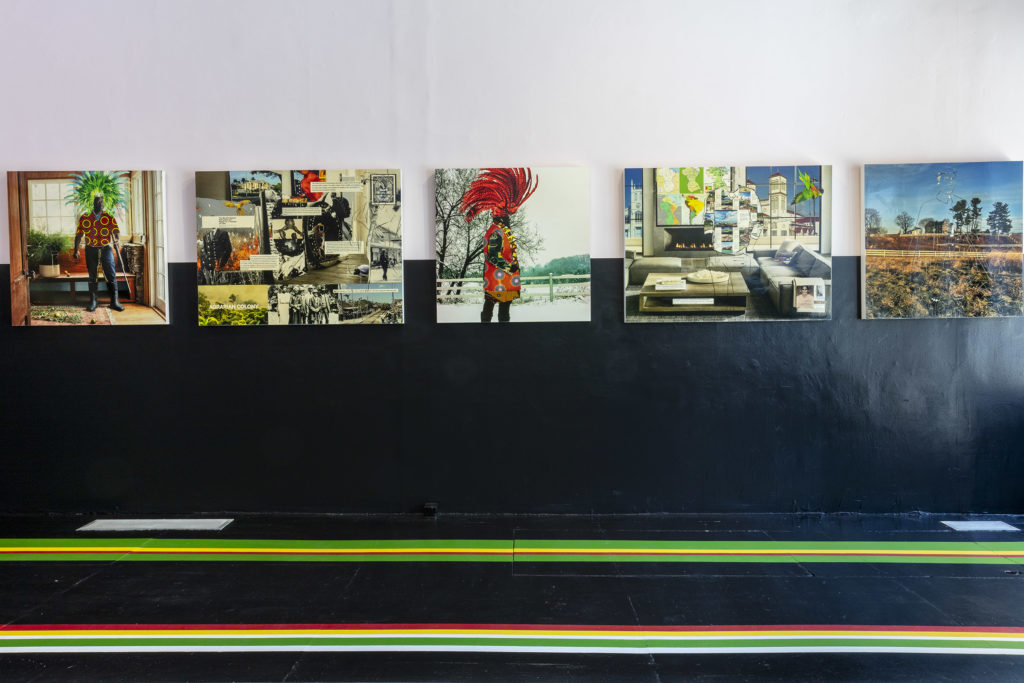 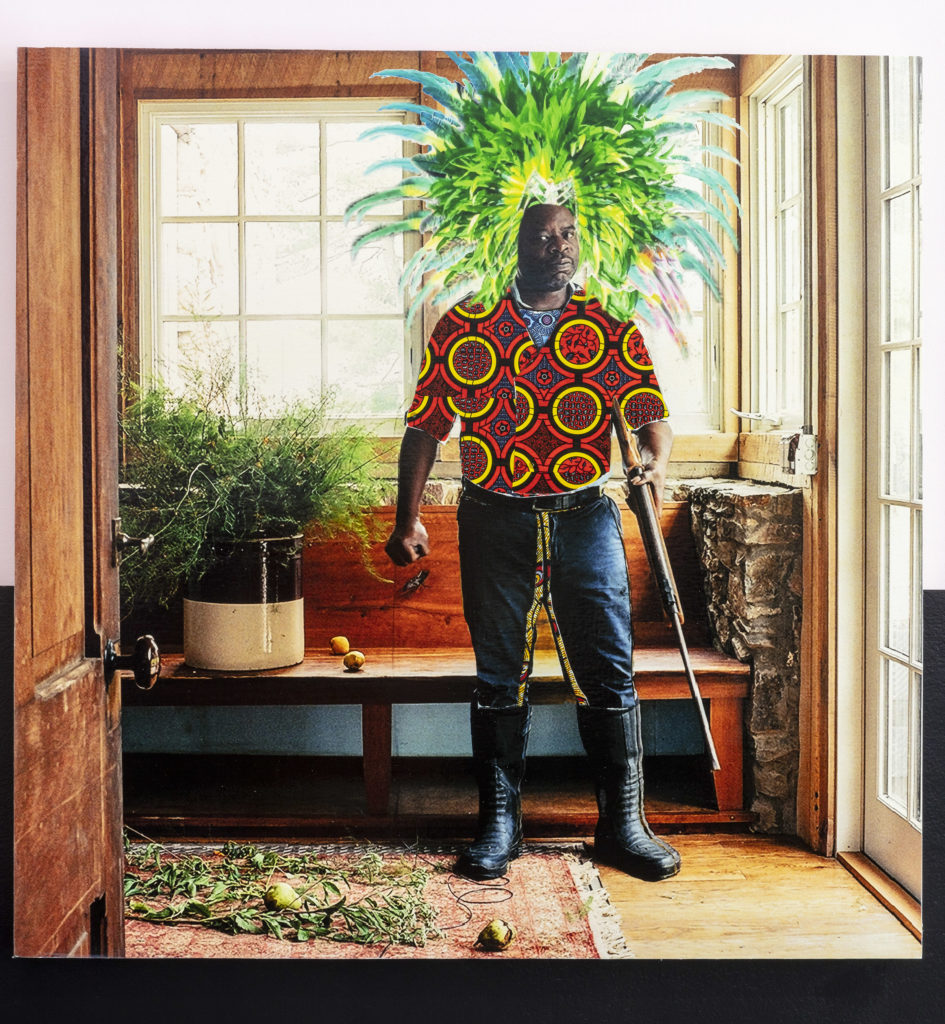 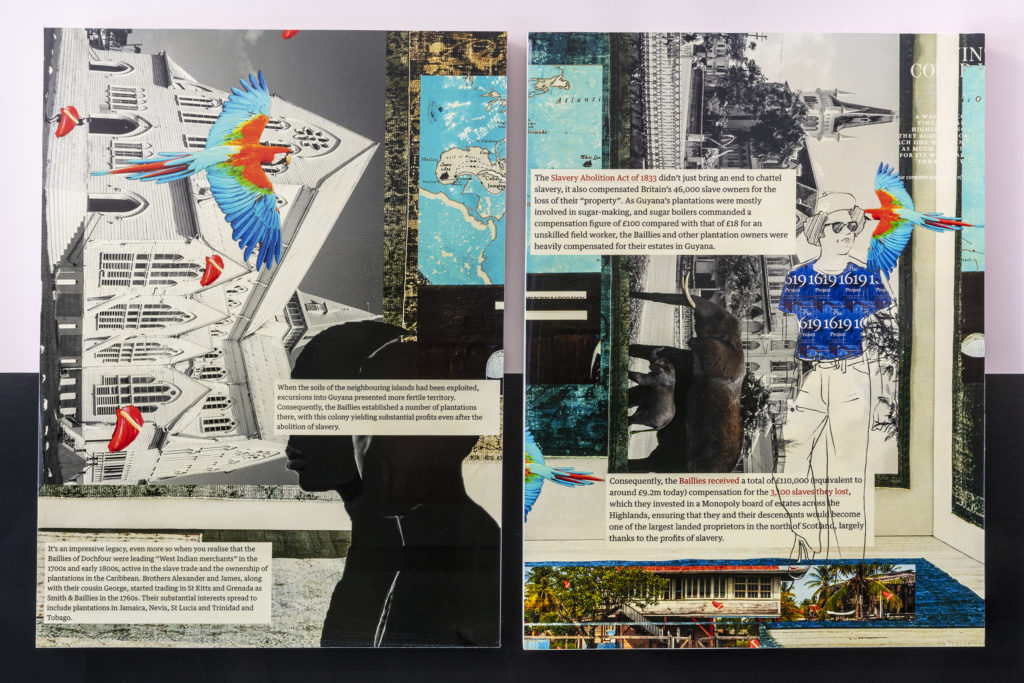 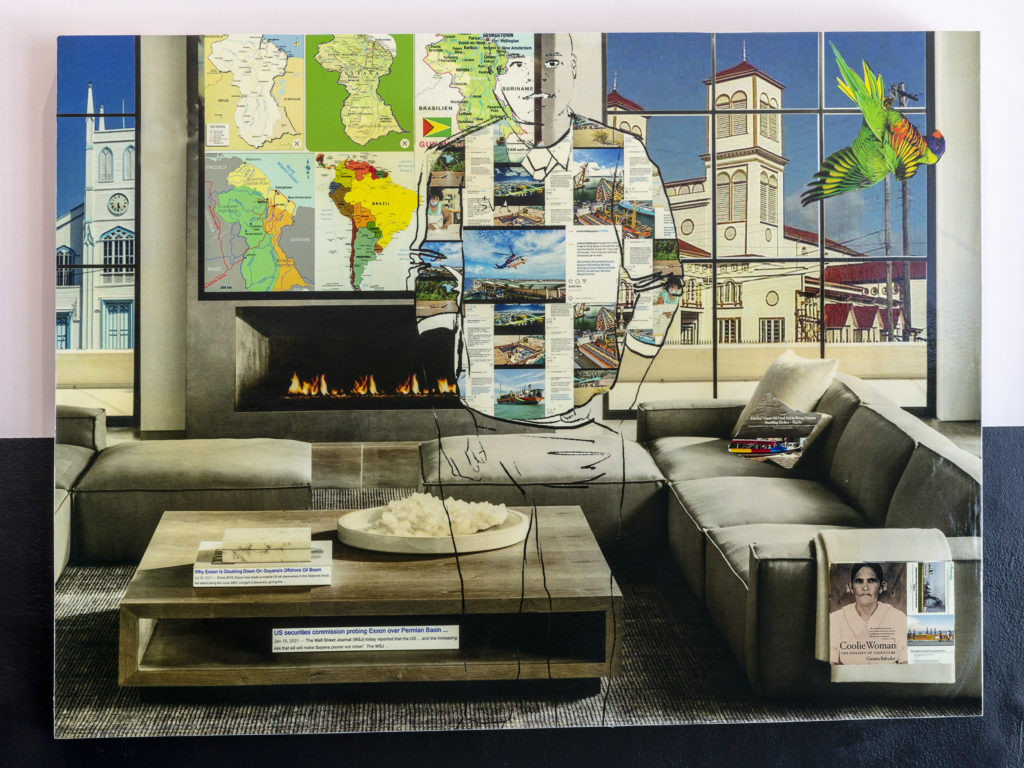 How do we present ourselves in and through our homes? What identities do we assume and project in our domestic space? A Guyanese-born artist living in Pittsburgh, Gavin Andrew Benjamin explores code-switching and the fashioning of self-identity in domestic space in Living in Eden.

Though the polished design and neatly arranged paintings evoke a traditional European salon or parlor, the content of the 12 sequential panels and the floor painted in the colors of the Guyanese flag explore and expose the impact of colonialism and mass media on the constructions of identity for immigrants and people of color. Benjamin’s panels mix self-portraiture, mass media images, and text drawn from articles about Great Britain’s role in the slave trade in Guyana, home catalogs, and popular media.

Imagine this: Moving to a new country with little or no resources and having to figure EVERYTHING out from scratch. How would you build a home in an unfamiliar and unwelcoming place? What histories (and scars) do you bring with you? Who would you be in this new place?

Last night, I sat in my home thinking about a memory that I had shut the door on, I went into a corner of my mind that I didn’t want to visit again.

When I was in junior high school, I was lumped together with another kid in school. Schroeder, if I remember his name correctly. He was from Haiti. I was from Guyana. We were both teased about our accents, about our clothes, about our food. Even Black Americans would tell us to go back to “your country.” We were both just kids trying to figure out things in our new homeland. But we were both told over and over that we didn’t belong, we didn’t fit into the mold set by this country.

When we talk about the so-called “American Dream” what we NEVER speak of is the pain and anger of having to leave everything behind. EVERYTHING: your extended family, your home, your land, your friends, your favorite pets, the foods you know, the language you speak, the gestures you make. And we have to build anew according to rules we don’t know and that were meant to keep us out.

When we talk about this “new Eden” of America, what we NEVER tell you is the evil in this paradise, about the humiliation our elders endured to make a HOME for us in countries like America. In his homeland, my grandfather was an engineer. In America, the only job he – a man in his mid-40s with advanced degrees – could get was a security guard at a Well’s Fargo Bank in NYC. Women like my grandmother took jobs as a housekeeper or nanny for wealthy families living in the countryside of Long Island for us to scrape by on the bare minimum.

But this isn’t new. Watching the news and seeing images of Black immigrants, or Haitian’s being whipped by white men on horses only bring back memories of a not too bygone era. All this is just beneath the surface, it is the foundation of this Eden.

When we talk about the immigrant crisis in America, what we NEVER ask is the question WHITE AMERICANS should be asking themselves: What role does this country have in the crisis in Haiti or Guyana or Afghanistan? What role do you have in the crises that force people to leave EVERYTHING behind and build new homes here on terms other than their own?

Gavin Andrew Benjamin is a multi-faceted artist with backgrounds encompassing commercial photography, painting, printmaking, and interior and product design. Born in Guyana and raised in Brooklyn, New York, he received his BFA from the School of Visual Arts in New York City and was drawn to experiment with many mediums. His current work focuses on his long-time interest in flowers, still-life, landscapes, portraits, and collage mixed with courtly painting traditions; a mash-up of sorts.

“Did you get everything?”