Notes Between Heaven and Earth 1995

As Alumet, we make art situations that invite participation in our process of finding roots and powerful sources to continuously recreate and confirm perceptions of ourselves as human beings related to art and nature. 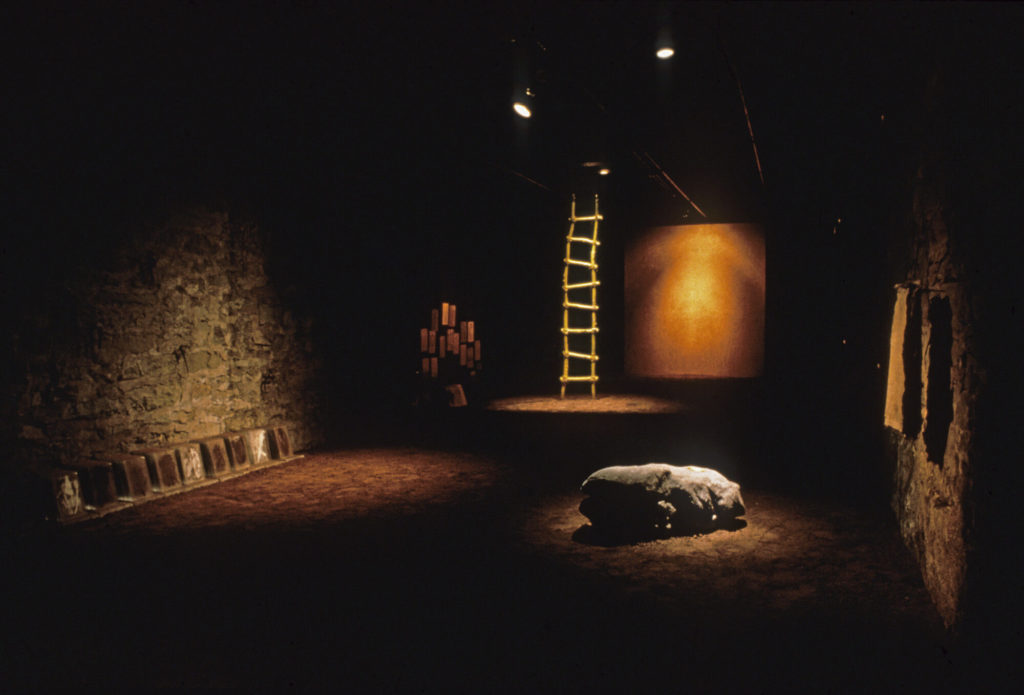 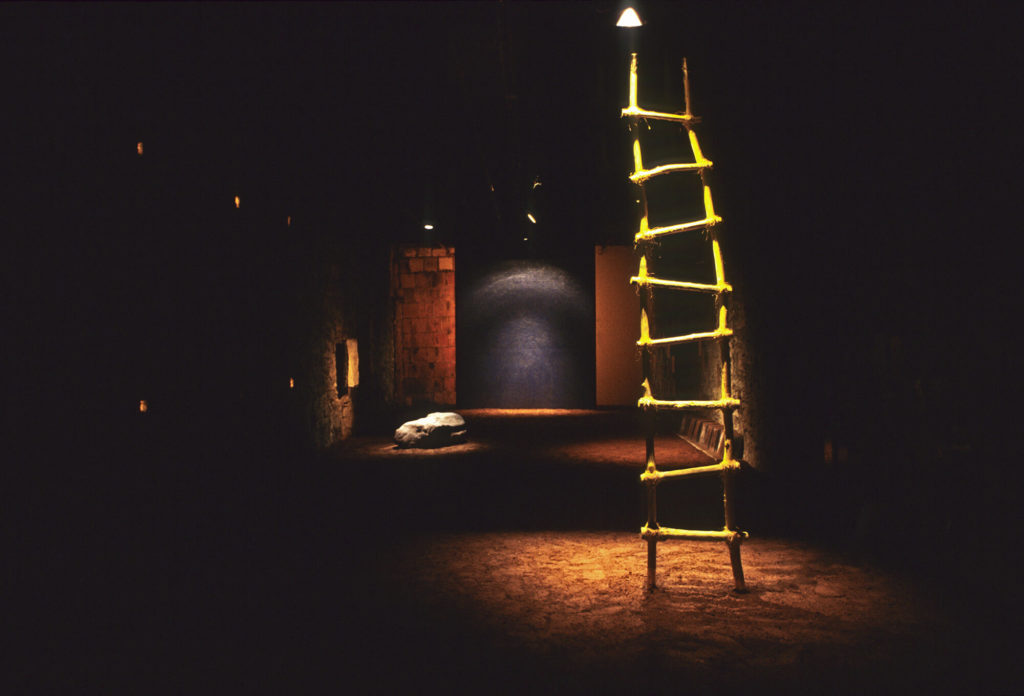 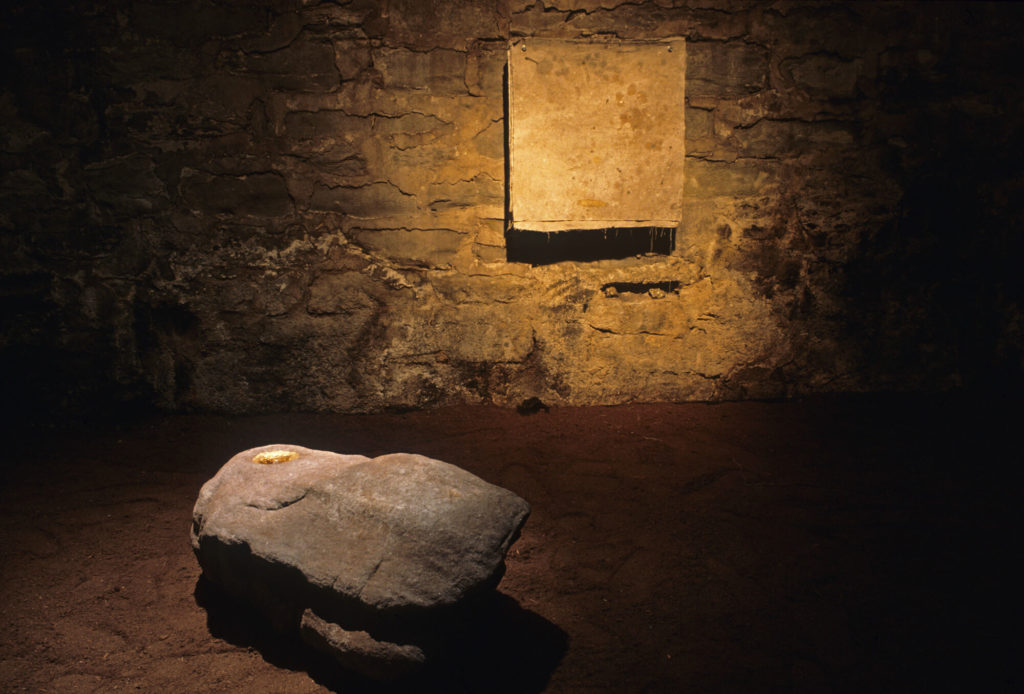 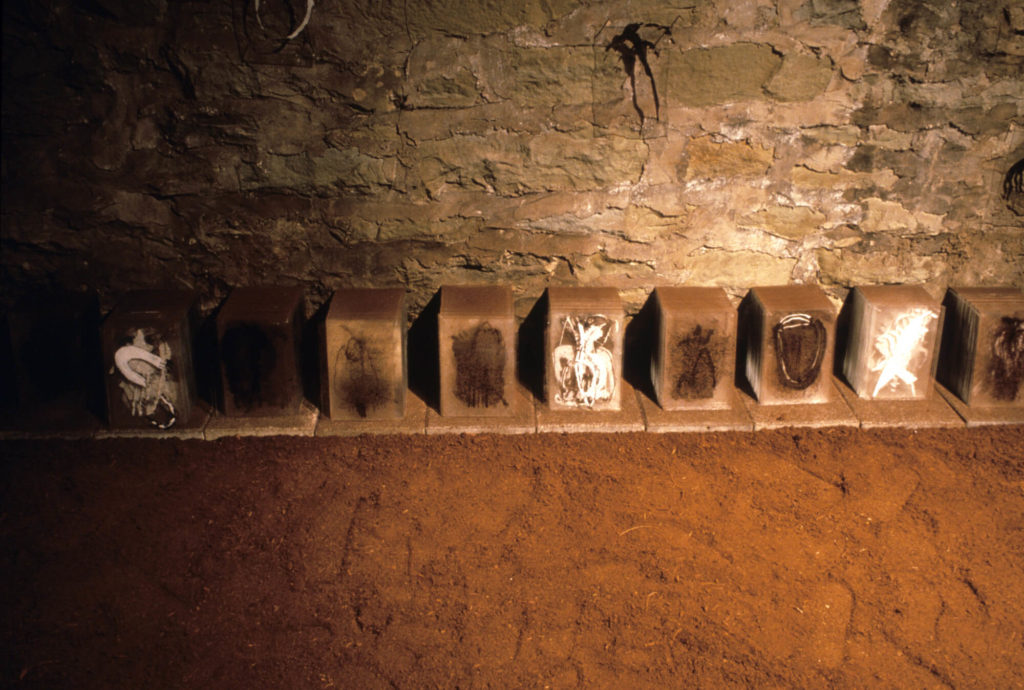 The artists have created a ritual space, with the feeling that something can or has happened. Peat moss on the floor provides an instant connection to the earth. It also deadens sound, with a resulting silence that adds to the solemnity. Holes in the stone wall contain candles, whose light passes through crystals, an element often believed to have power and energy. A rustic ladder suggests a connection between heaven and earth. The artists cut holes in the concrete, beneath the peat moss, so the feet of the ladder are touching earth. The top and bottom ends of the ladder are covered with gold leaf. A wall has been constructed at the entrance, initially blocking a view of the gallery. The side facing the entrance, painted bright yellow with a human form. The other side, a navy blue, has silvery writing layered and layered until it becomes unreadable. Both sides suggest cave paintings. A canvas book is cut from a painting tarp that has seen service at the Mattress Factory. Pages are covered with gold leaf markings, not real words but evidence of human tracings. Gold leaf is used in several ways in the installation. The large rock is an element of earth. The artists carved a circular indentation, lined it with gold leaf and filled it with water. At the other end of the rock, they carved an X that is oriented to the north-south-east-west axes. Even in this windowless basement gallery, viewers can orient themselves. Drawings on 1000 sheets of plastic have the themes of nature, angels, and human forms. One group hangs near the entrance; most are stacked along the stone walls.

As Alumet, we make art situations that invite participation in our process of finding roots and powerful sources to continuously recreate and confirm perceptions of ourselves as human beings related to art and nature.