One large gallery space with high ceilings is given over to two brown and white pigeons The pigeons are provided with nesting materials food... 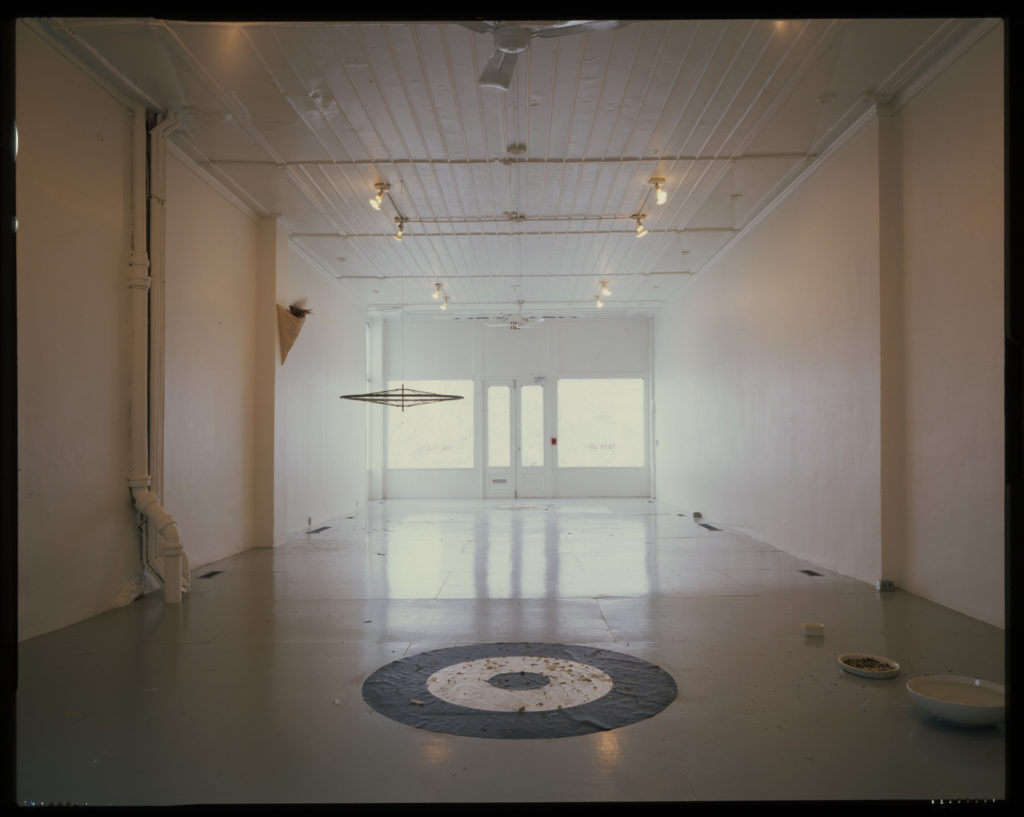 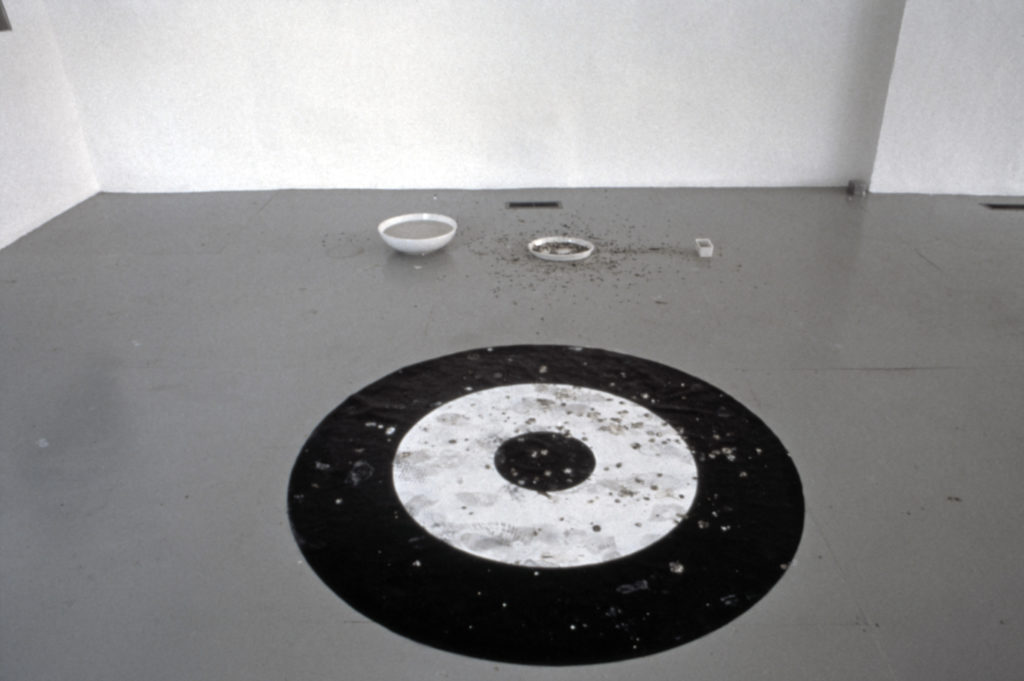 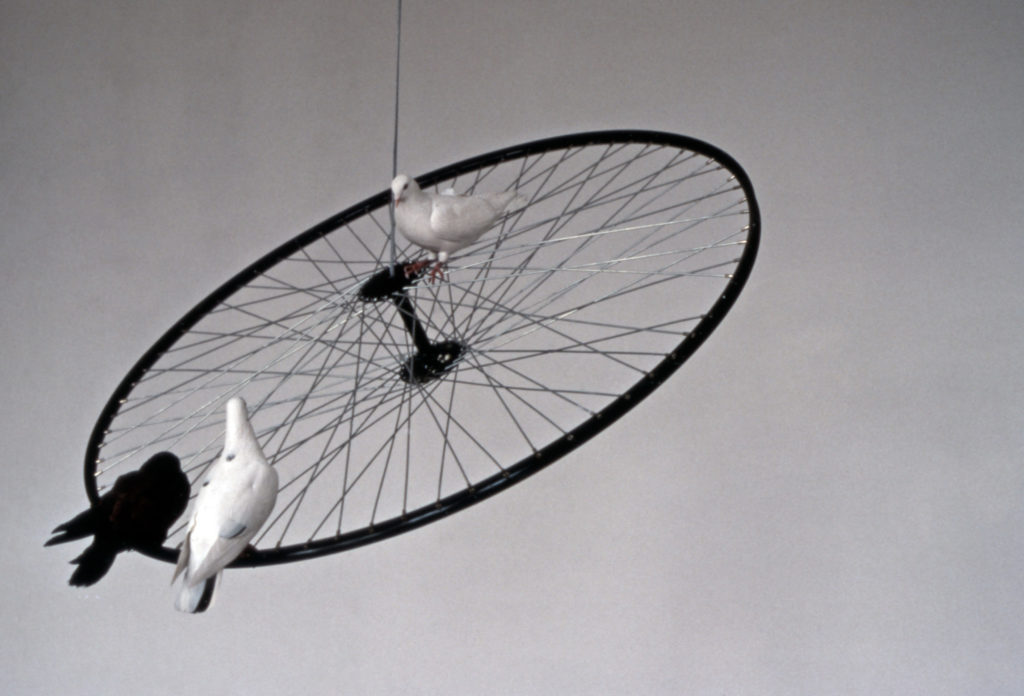 One large gallery space with high ceilings is given over to two brown and white pigeons. The pigeons are provided with nesting materials, food, and a bicycle wheel as a potential roosting spot; they more often roost instead on the room fans, which are closer to the ceiling.

Targets, placed under the roosting places, accumulate droppings. Windows are frosted with glass wax so that the birds will not fly into them. The pigeons, making immediate use of the materials provided, construct their nests in the soft canvas pouches attached to corner spaces. Visitors to the gallery can walk comfortably through the space, which is large enough to allow pigeons and persons to coexist.

In 1969 Dove Bradshaw first embraced the use of indeterminacy by enlisting the effects of time, weather, erosion, and atmospheric conditions on natural and chemical materials. Her earliest work in this direction, Plain Air, invited the unpredictability of life forces by introducing mourning doves into an installation of bicycle wheels and floor—mounted targets. She developed the Contingency chemical paintings that change with indoor atmosphere, the Negative Ions erosion sculptures of salt, Indeterminacy stone and mineral sculptures that bleed outdoors, and charged crystals to receive transmissions from weather stations, local and short wave, along with radio telescope signals from Jupiter in Radio Rocks. In another vein, her 1999 body works presented the twenty-three elements proportioned by weight in glass flasks, later evolving into Partial Portrait, in which casts of her foot, hand and face emerge from a wall.

In 1975 Bradshaw won a National Endowment for the Arts Grant; 1975 the Pollock Krasner Award; 2003 a Furthermore Grant; 2006 the National Science Foundation for Artists Grant. Her work regularly exhibits in the US, Europe and Japan, notably appearing in the 6th Gwangju Biennale, South Korea. Solo exhibitions also include: the Museum of Contemporary Art, Los Angeles, Utica College, Syracuse University, Utica, New York, The City University of New York, Pierre Menard Gallery, Cambridge, Massachusetts and galleries in New York, Los Angeles, Philadelphia, Cologne, Copenhagen and Tokyo, among others. She is represented in the permanent collections of many major museums: the Metropolitan Museum of Art, Museum of Modern Art, The National Gallery, The Art Institute of Chicago, The British Museum, Centre Pompidou, and the Russian State Museum, Marble Palace, St. Petersburg.

As Artistic Advisor to the Merce Cunningham Dance Company along with her life—partner William Anastasi from1984 to its demise in 2011, she designed décor and lighting with music of John Cage, David Tudor, Takahisa Kosugi, Christian Wolff and Emanuel de Melo Pimenta for a decade of productions around the world. In 1986 the BBC commissioned Merce Cunningham’s Points In Space filming its making and premiere for which Cage composed the music, Anastasi designed the three backdrops and Bradshaw the double sets of costumes. Nureyev later staged it for the Paris Opera Ballet. Her 2011 film, SPACETIME, scored to Cage’s Ryoanji, was screened with a live accompaniment by the Mesostics Ensemble at the Paris Conservatoire on Madrid Street. In 2012 for the Sorbonne colloquium: John Cage Artist, John Cage Composer: Anatomy of the Convergence, Bradshaw delivered Still Conversing with Cage on her experience of his free-associating mentorship. Born in 1949 and still residing in New York, she also continues since childhood to summer in the Endless Mountains of Pennsylvania.