Dennis McNulty s sculptural works installations and sound performances deal with the friction between the planned and the unplanned particularly in relation to urban... 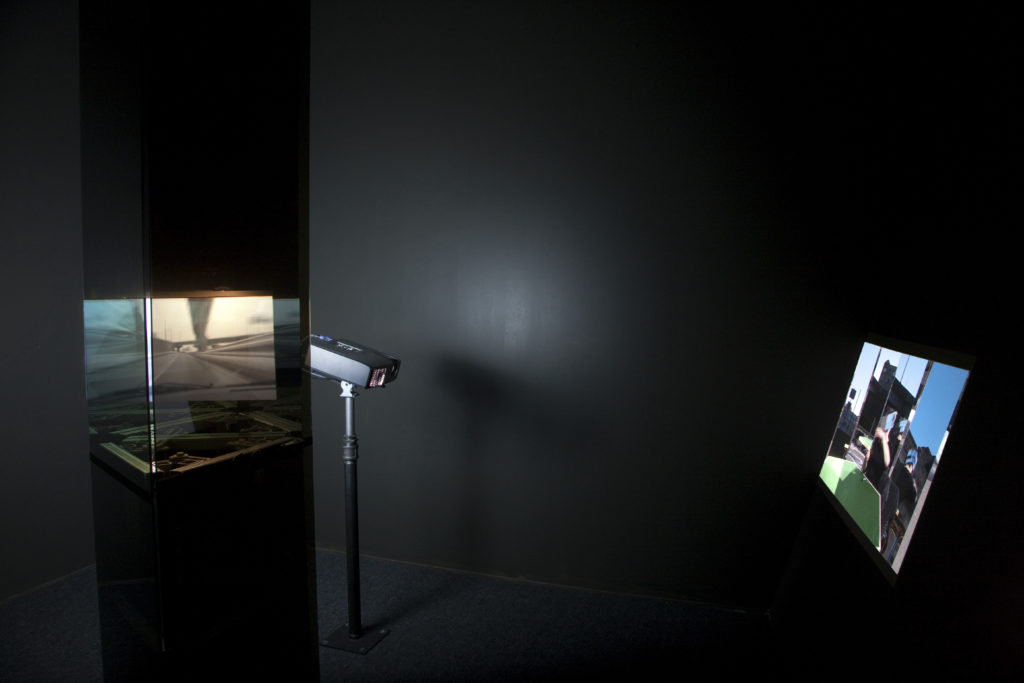 Dennis McNulty’s sculptural works, installations and sound performances deal with the friction between the planned and the unplanned, particularly in relation to urban spaces. Drawing on his research into the history of the urban fabric, he employs sound, image and objects in spatial configurations to dislocate the viewer/listener through an overlap of multiple times and spaces. Architecture and urban planning often form a starting point for McNulty. McNulty considers how and what buildings become, their values, failures and possibilities. Undercurrents of science-fiction and fantasy interplay with social, political and architectural histories, in works which weigh intention against physical experience.

This work entitled Projected from first principles sites two alternating HD videos within a constructed space. One is projected onto the wall accompanied by somewhat ambiguous, though distinctly urban sounds and the other is projected into a triangular arrangement of two-way mirror glass. The former features images of a seated figure wearing a mirrored visor and gesturing to the viewer. A pen and a sphere are offered as props in the explanation of forms and signs but what is this communication? How do we understand? There is a certainty in the figure’s gestures, a precision of form and clear intent, and yet we feel as though something eludes us. In the background, reflected images of landmark buildings in downtown Pittsburgh and traffic on a freeway ramp, slowly shift, suggesting an infinite flow and perhaps an inability to stop. The other video presents a fragment of footage of a car journey along the freeway, intertwining and looping again and again, on an endlessly repeating excursion. The image repeats itself visually to infinity in the two-way mirror matrix; a never-ending loop or a journey to nowhere. These two videos alternate with each other and within this mechanism of display suggests a tension or friction, an ambition to control and be certain of something, anything, and yet an inability to stop the motion of time or progress. The reflections that are employed in all aspects of this work confirm our role in and responsibility for the systems that currently surround us.

Dennis McNulty is an artist whose work is generated through an investigation of embodied knowledge in relation to other forms of knowledge, often in the context of the built environment. Beginning with detailed research of various kinds, and informed by his studies in psychoacoustics, the works often take hybrid forms, drawing on aspects of cinema, sculpture, sound and performance.