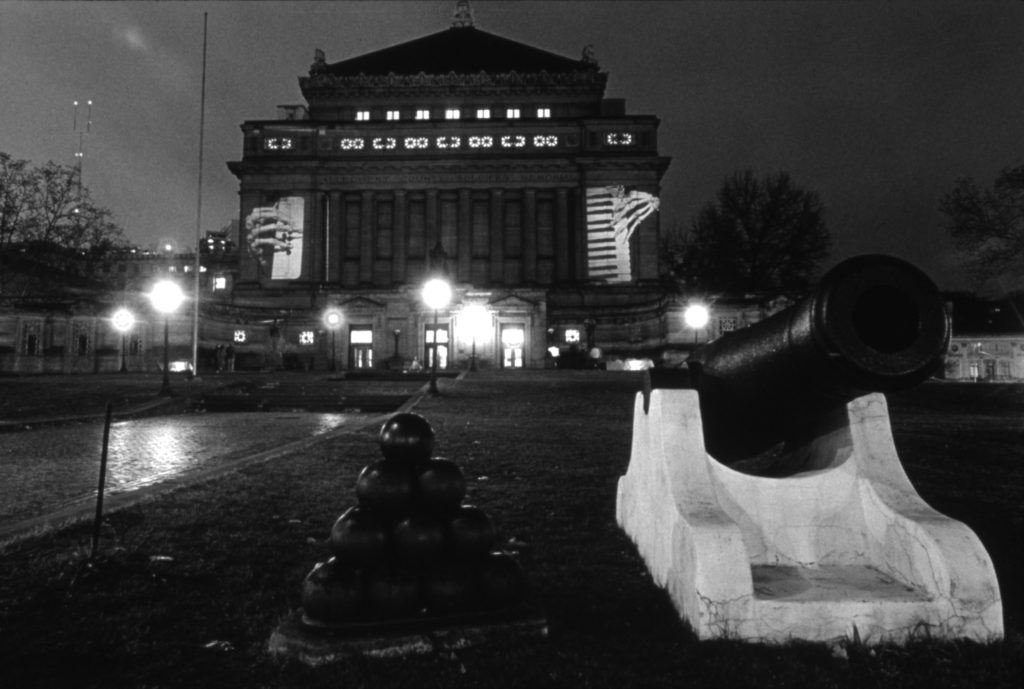 Soldiers and Sailors Memorial Hall, in Pittsburgh’s university district, functions as a military museum and concert hall. At dusk, tow enormous images emerge from its pale concrete face. High on either side of the facade, a pair of skeletal hands, grotesquely enlarged, ran their bony fingers over the keys of an accordion. The row of architectural columns in between became the bellows of the instrument.

Like all War Memorial auditoriums in the United States, the Allegheny County Soldier’s Memorial in Pittsburgh operates both as a cultural center (concerts, conventions, ceremonies) and a display of war images and memorabilia. These provincial displays often lack the grandeur of their European counterparts, but sometimes have strangely persuasive intimacy. The images are projected on either end of the facade, where names of battles from various wars are engraved. There is an iconographic tradition of the skeleton playing an instrument in European and Latin American popular art, the dance of death. The accordion is a very working-class instrument and appropriate to Pittsburgh, its history and memory.

Krzyszrof Wodiczko (b. 1943) is currently a Professor in Residence of Art, Design, and the Public Domain at the GSD at Harvard University. He was born in Warsaw, Poland and now lives in California. He went to the Academy of Fine Arts Warsaw and obtained a Master of Fine Arts in Studio Art, Interior and Industrial Design. He also has two Honorary Degrees from Academy of Fine Arts in Poznan, Poland and from the Main School of Art. He creates video productions and large-scale slides on architectural facades and monuments.