Rhizome Intrastructure is a body of work exploring ideas of complexity connectivity and relationships between 2 and 3 dimensions Rhizome consists of hundreds of... 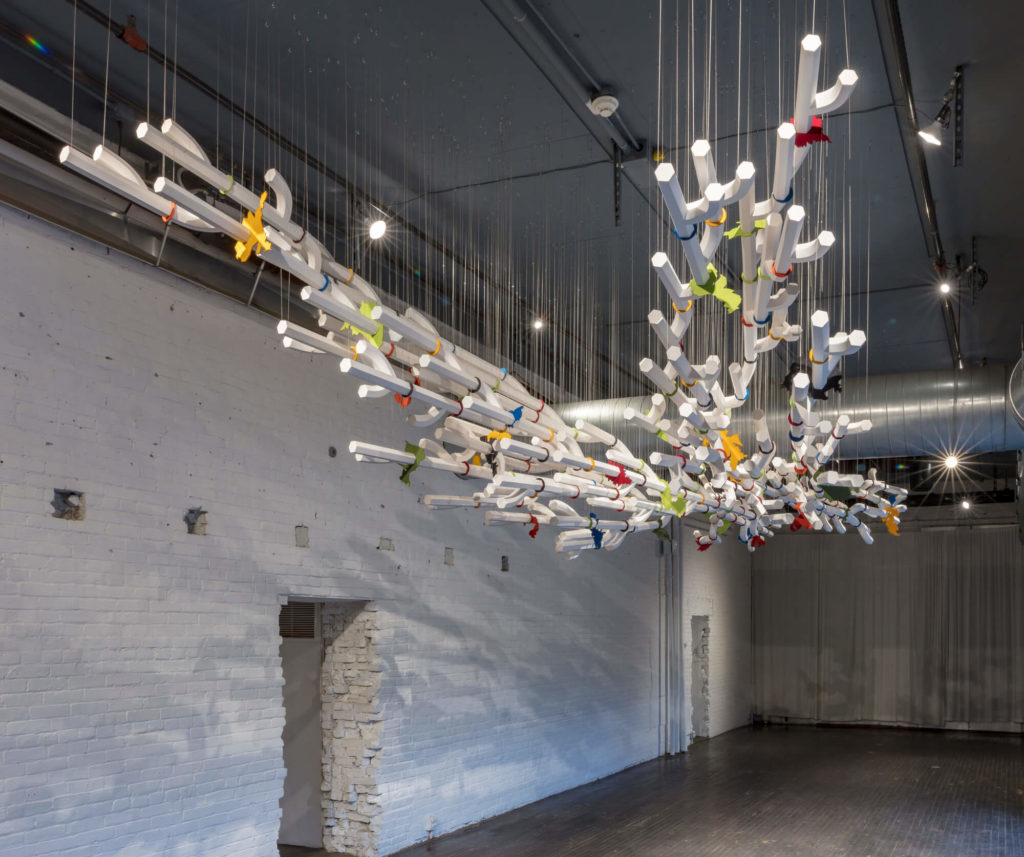 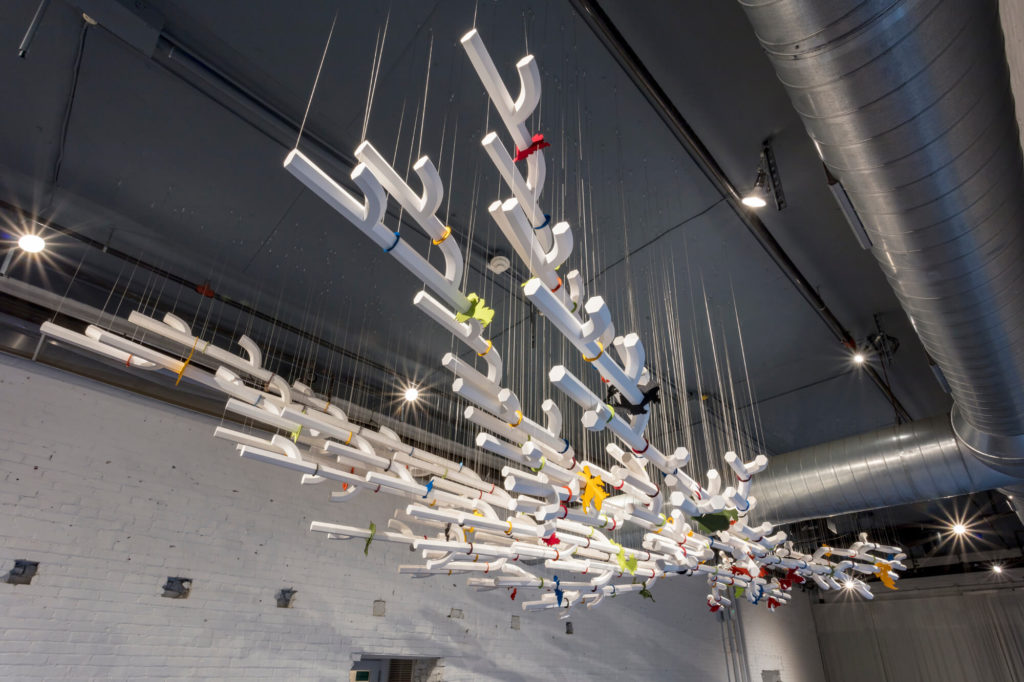 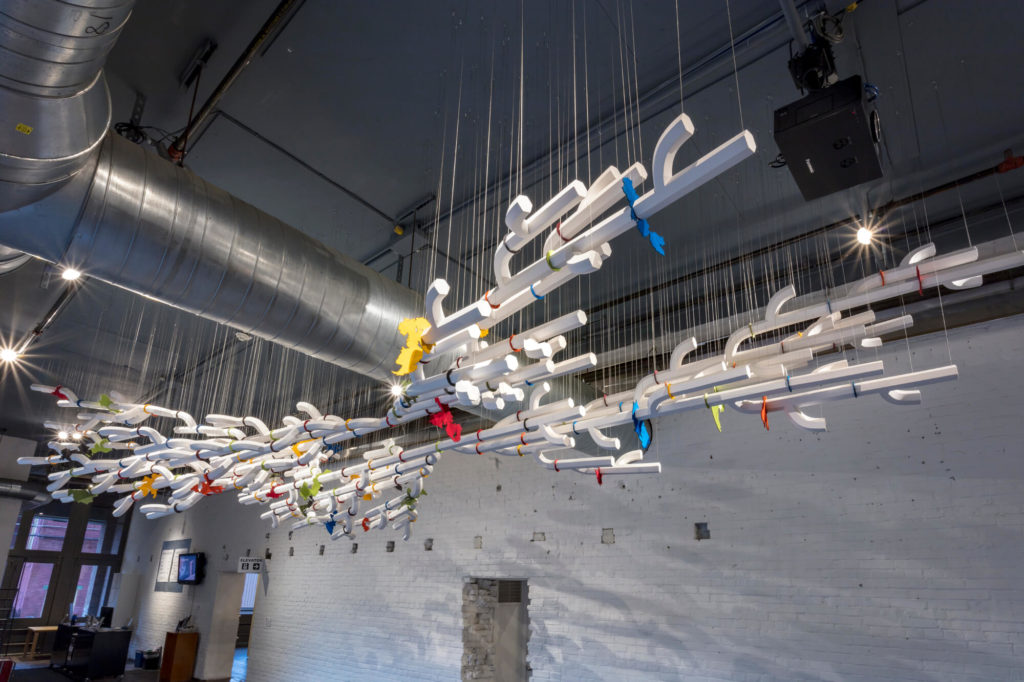 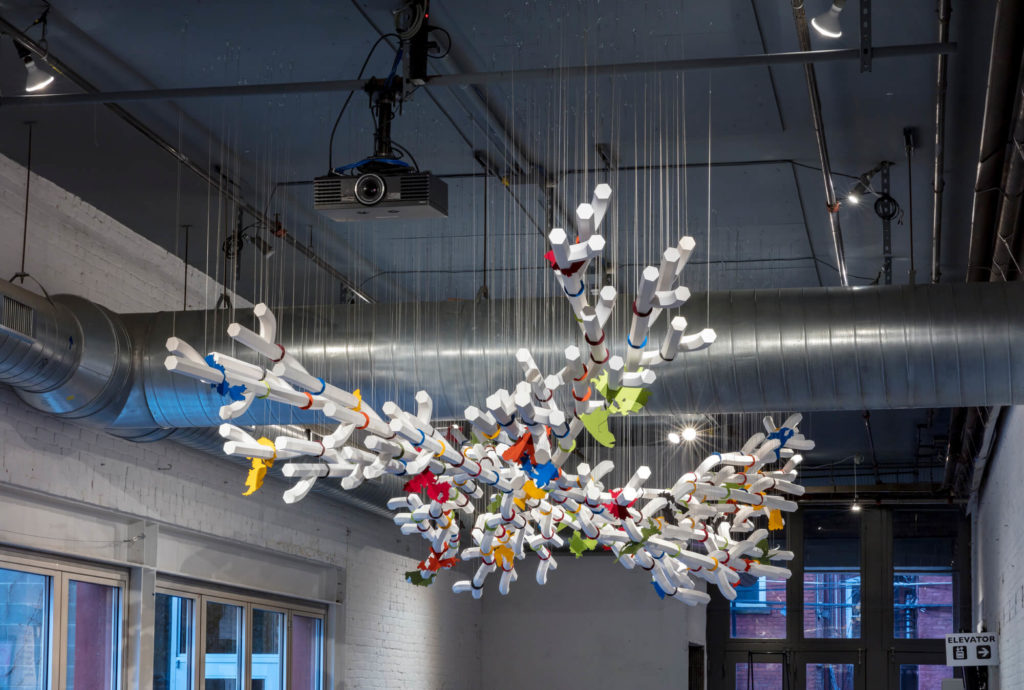 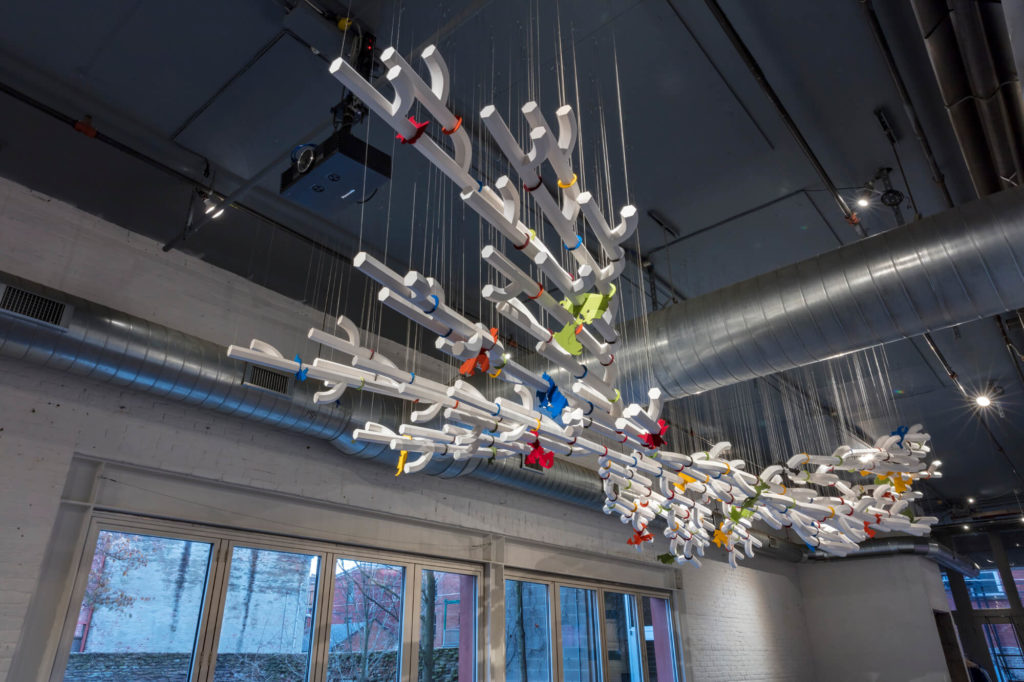 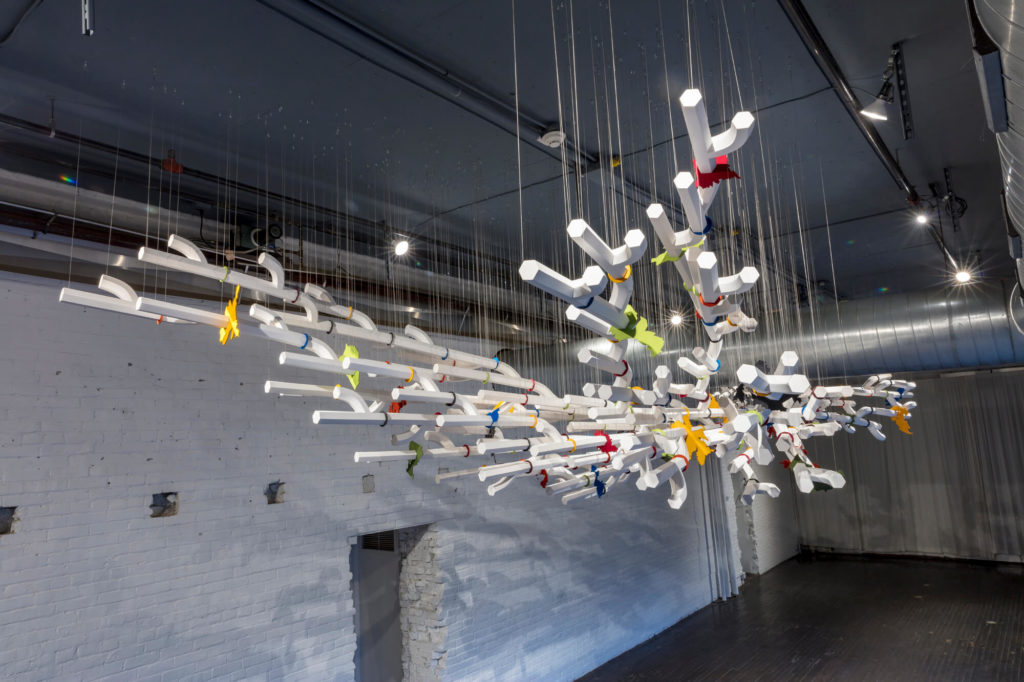 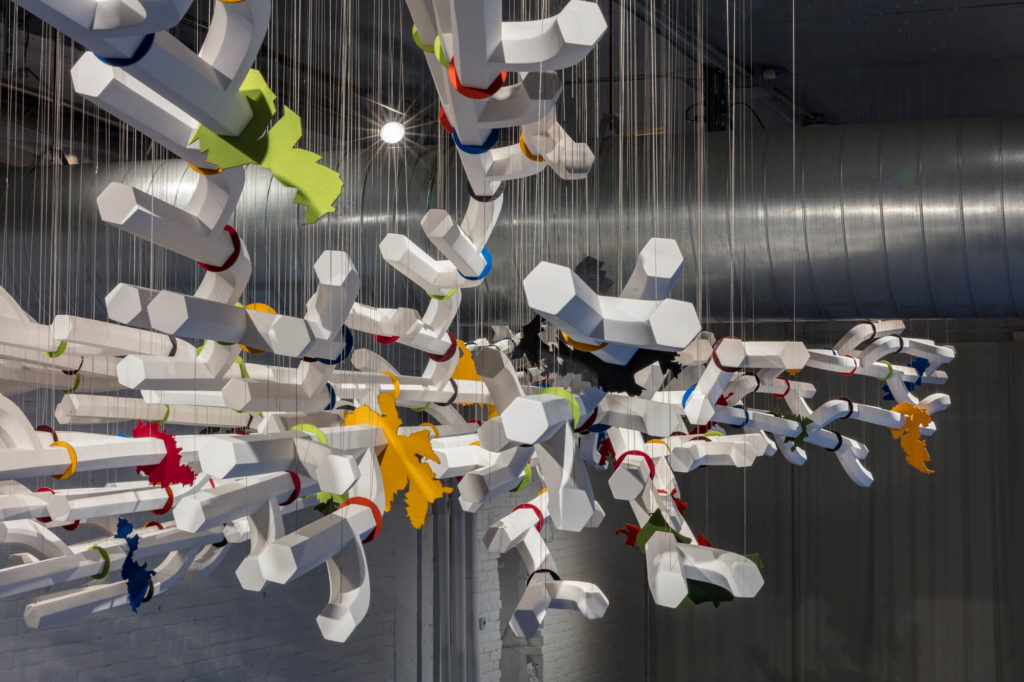 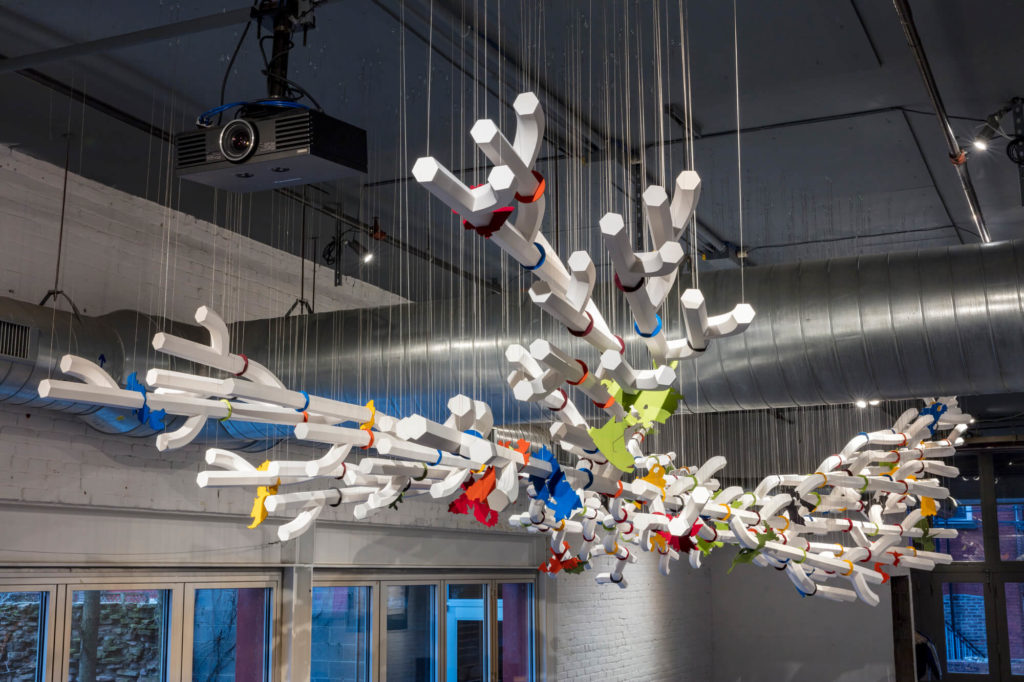 Rhizome: Intrastructure is a body of work exploring ideas of complexity, connectivity and relationships between 2 and 3 dimensions. Rhizome consists of hundreds of individual abstracted “branch” forms multiplying across and out into the space, intersected by numerous floating shapes made from colored felt (which suggest the mapping of space or nodes of data). These felt spaces are the unwrapped skins of my ceramic collection, from family heirloom to knick-knack, removed from various layers of hierarchical power inherent in such objects.

The present time is one of interconnectedness. We are bound up in an interwoven network of multiple systems that govern our interaction with the world and each other. Some of these systems are visible, most are hidden and many are too complex for us to visualize. The Rhizome has become a philosophical idea of how to imagine these relationships, as well as being a particular form of biological structure. I am caught up in the friction between these two understandings of the world, creating a work, whose physical substructure may speak more to “root”, but which is intended to speak to the concept of Rhizome as a philosophical and aesthetic model.

Alex Hibbitt is a British artist, and currently an Associate Professor of Art at Ohio University. Hibbitt gained her MFA in 2001 from Alfred University and gained undergraduate degrees in Ceramics from Camberwell College of Arts in London and The Gerrit Rietveld Academie in Amsterdam.

Her work has been exhibited widely both in the U.S. and abroad, including The Victoria and Albert Museum in London, The Museum of Decorative Arts in Prague, De Witte Voet gallery in Amsterdam, and the Soap Factory in Minneapolis. Recent exhibitions include Neither Landscape or Architecture at The Carnegie Center for the Performing and Visual Arts in Covington, Kentucky, 2010, Atmosphere at the James Oliver Gallery in Philadelphia, 2009, The Margins at The Ice house, Phoenix, Arizona, 2009, and Midstream at the Arizona State University Art Museum Ceramics Research Center, 2008.

She has been a visiting artist and speaker at Minerva Art Academy in the Netherlands, Denison University, Granville, Ohio, The Clay Studio in Philadelphia, The University of Minnesota, Minneapolis and Ohio State University. Hibbitt’s work is in private and public collections both in Europe and the United States. She was awarded a McKnight Foundation Residency Award in 2010 and an Ohio Arts Council Individual Excellence grant in 2006.