The Girl Chewing Gum 1976 opens with a view of a bustling streetscape in Dalston East London accompanied by a distinctive male voice directing... 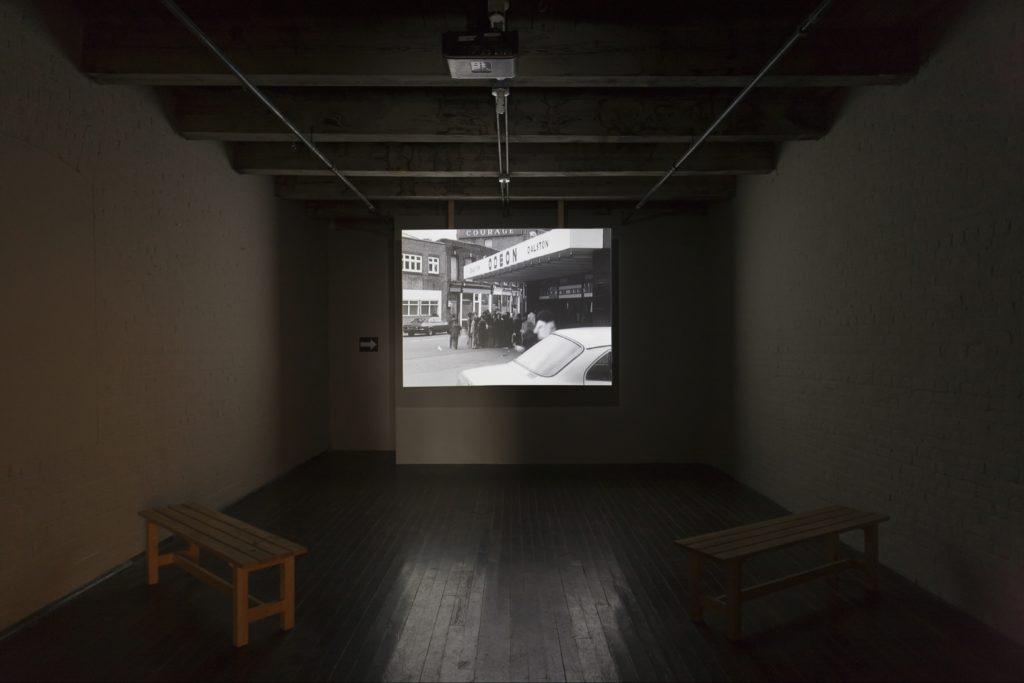 The Girl Chewing Gum (1976), opens with a view of a bustling streetscape in Dalston, East London, accompanied by a distinctive male voice directing the activities of the busy street; a man walking across the road, a girl chewing gum, a trailer moving on. Slowly as the orchestrated activity unfolds, it unravels and the role of narrator as director is called into question. As the description of the events unfolding shifts from the visible action to the pedantic, from people crossing the street to directing the large hands of the clock to move on the hour, certain slippages become apparent. Slowly within this simple street view what has been constructed, what we see within the frame, what is happening, and the relationship between seeing and believing is called into question. Gradually any sense of authority or authenticity dissolves as the relationship between narration and image becomes increasingly fractured. The relationship between fact and fiction is teased out in the filmic form; black and white and almost documentary-like. In shifting the narration from direction to description, Smith unravels the authority of the image while playing, making fun of, and untying the role of the director as author or controller. Smith’s film exposes the constructed-ness of the real in a way that is fundamentally destabilizing. John Smith is known for making films in his immediate surroundings, in a hotel room in which he is staying, a local pub, a nearby street or sometimes even on his own doorstep.

One of his earliest films, The Girl Chewing Gum, was made while Smith was still a Masters student at the Royal College of Art, yet it presents some of the key elements of Smith’s work; the act of filmmaking, language, humor, control and serendipity. Documenting and probing the local, the immediate, Smith combines an attention to the act of looking and a playful irreverence for the everyday world we encounter and its realities. He makes us look more closely not only at the medium of film or cinema but also our own surroundings. As artist Cornelia Parker wrote on his work ‘It’s as if by choosing as his subject the ordinary things that surround us all and by scrutinizing them closely, turning them over and inside out, he can find all the hidden complexity of the universe. The whole world brewing in a ‘teasmade.’’

Inspired by the Structural Materialist ideas which dominated British artists’ filmmaking during his formative years, but also fascinated by the immersive power of narrative and the spoken word, John Smith has developed a body of work which deftly subverts the perceived boundaries between documentary and fiction, representation and abstraction. Drawing upon the raw material of everyday life, Smith’s meticulously crafted films rework and transform reality, playfully exploring and exposing the language of cinema.