A small gallery office space equipped with a desk and chairs signage computing imaging and printing equipment set up to establish the flavor of... 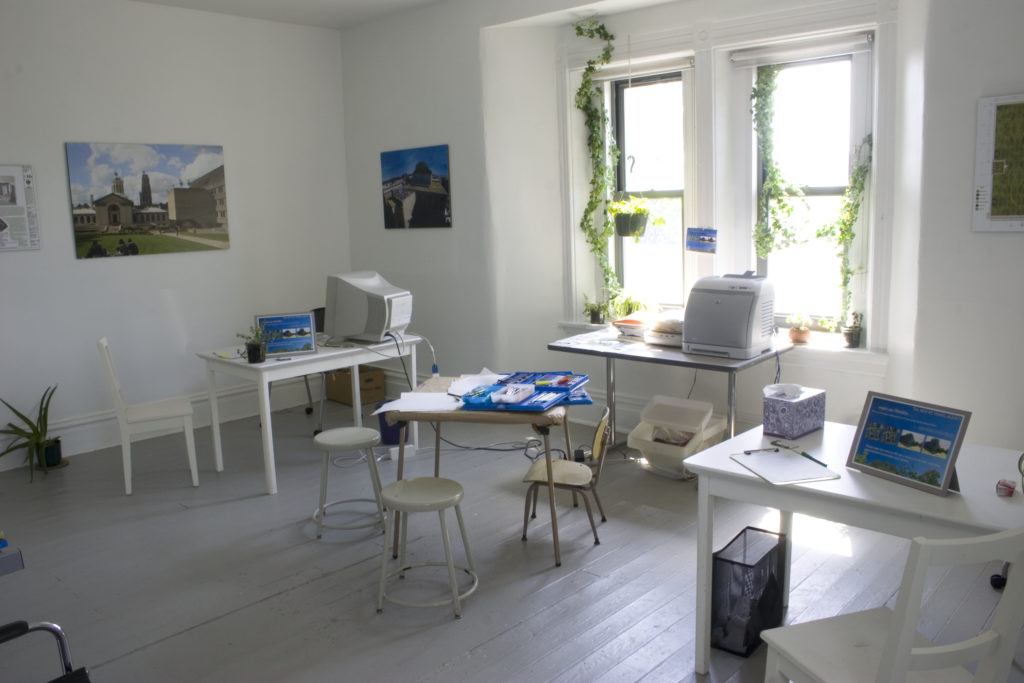 A small gallery/office space equipped with a desk and chairs, signage, computing, imaging and printing equipment set up to establish the flavor of a full service travel agency for changing the world, from above. Agents will be available to assist customers while busy working on computers, telephones and printers. Some advertising on the wall and a printed brochure on the desk will describe the service provided in the agency’s office space. A few existing examples of mounted artworks will be exhibited on the walls for reference. When the agency office is open one of the agents: bigwitz.bot, hoch.bot or jesha.bot will be available either in person or via the internet with either a clipboard and/or a laptop to entertain the customer/viewer’s Revision Requests.

Viewers will be asked to go and/or be escorted to a location via Google Earth whereupon they can request to revise a rooftop by imaging it from a ‘menu’ of sustainable components including:
• Living roof strategies; intensive, extensive or modular green roof systems planted with sedums, perennials, prairie grasses, food crops and kitchen herb gardens, fruit tree orchards and/or a forest ecosystem.
• Renewable resource strategies: photo voltaic systems; wind turbines; water wheels, water retention tanks and irrigation systems.
• Any other imaginative addition to a rooftop plane that a customer may desire.

Depending on how busy the agency is, the agent will work with the customer to create an image on the chosen site, send the image electronically to the customer and print out two small copies right then and there; one for the customer, the other to display in the office/ gallery. If all agents are busy or not present, customers are asked to fill out a survey/itinerary form (posted on the wall above the reference table) and leave on one of the agent’s desk. The reference area is a small desk with books for reference about green roofs/walls and sustainable building practices. The plan is to engage viewers in a conversation not only about the possibilities of sustainable systems but also the new perspective and ability we currently have to view the world from above…. and perhaps to change it…..and therefore improve it for the birds and all the rest of the critters; two legged, four legged and more.

Bob Bingham (American, b. 1953) received a BA in Art from Montana State University, Bozeman and a MFA from University of California, Davis. He is currently a professor of the School of Art and a Distinguished Fellow in the STUDIO For Creative Inquiry at Carnegie Mellon University. His work has been acknowledged with awards and grants including: NEA, PA Council on the Arts, Pollock-Krasner Foundation, Art Matters, Inc., Heinz Endowments, New Forms Regional Arts Grant, and Three Rivers Environmental Award.

His art practice evolved from ‘green’ mixed media installations, into the public realm to address and transform urban water, land and agricultural issues; the interconnectedness between the natural and built environment. He co-directed an interdisciplinary team effort, The Nine Mile Run Greenway Project that culminated in exhibits at the Wood Street Galleries and the Regina Miller Gallery, CMU, Pittsburgh. This greenway project led to the formation of the Nine Mile Run Watershed Association and the largest urban ecological stream restoration in the United States. Currently he is engaged in another interdisciplinary ‘team project, Living Waters of Larimer to demonstrate a variety of ‘placemaking’ strategies to capture water to benefit the community and to serve as a model of successful ‘Green Infrastructure’ to mitigate storm water issues.

Claire Hoch (American) grew up in the suburbs, lacking close neighbors but a strong connection to the dirt. After graduating from Carnegie Mellon’s School of Art, she returned to the dirt seeking new platforms of education. Claire built rammed-earth houses in Guatemala and works with an urban farm in Pittsburgh, uncovering simple solutions to our most basic human needs. She cultivates the rich diversity of communities, the food we eat, and our natural environment.