The tomb serves as a symbol of power and preservation of power with the embalmed subject set to be preserved for eternity in a... 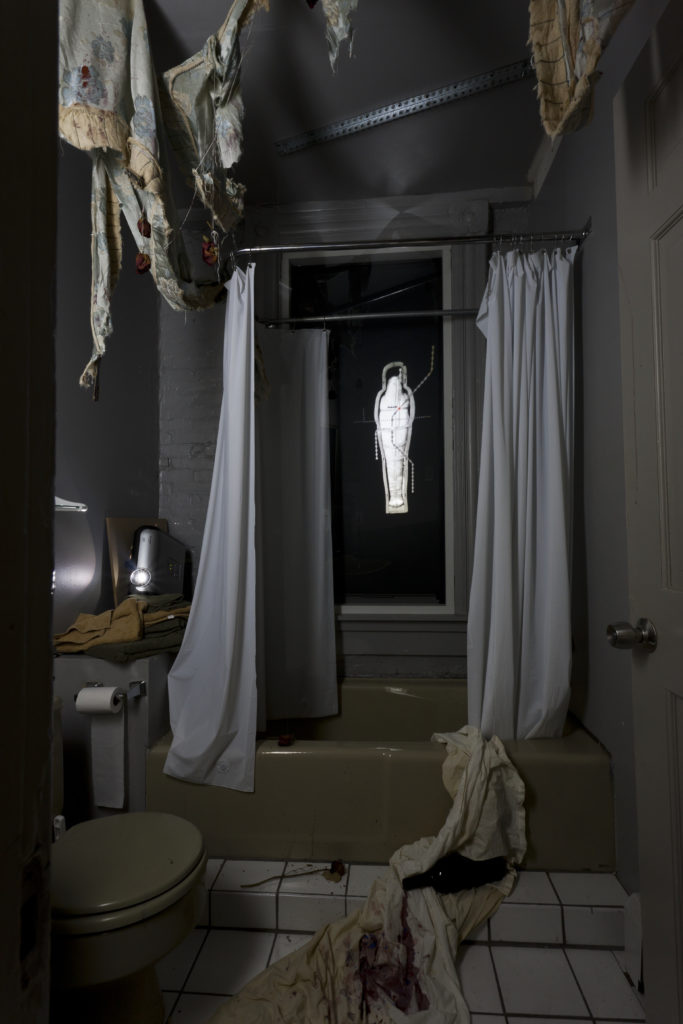 The tomb serves as a symbol of power—and preservation of power—with the embalmed subject set to be preserved for eternity in a sarcophagus housed in an elaborate crypt. Massive amounts of resources and toil are directed away from other causes to fortify the image of a single man. The reign of Mubarak had taken a somewhat dynastic shift—he had been in power for three decades, and had taken steps to shift power to his son. The Egyptian Revolution brought his reign to a sudden end, effectively erasing his status and any delusions of permanence his position may have afforded. Vainglorious Stammering illustrates a sense of shrinking and recession—the body in the sarcophagus becomes exposed, the unyielding limestone is replaced with flickering lights, the grandiose architecture is transposed to a neglected bathroom. In betraying the ideals used to consolidate its reign, the heart of the regime stammers unto death whilst still immersed in lavishes that have long undermined more fundamental needs.

Hologram installation is a digital map image transposed on a tomb, created by Susanne Slavick. Heartbeat recording by Hend Samir.

Mark Bellaire is an artist who uses a wide assortment of digital and traditional media to explore multi-faceted interests. His artwork is heavily influenced by his scientific background, including his work at the University of Pittsburgh, assisting in deep-brain stimulation and schizophrenia research. Using materials as diverse as oil painting, music composition and computer programming, he works to create illusionary tangibility through the subtle distortion of real conditions. Common themes in his work include the convolution of experience by perception or documentation and the escalation of fatal flaws.