Where do we go from here (from the Orthostatic Tolerance) 2008

Working with scientists at Carnegie Mellon and Yale Universities Strachan created a rover that inhabits an other-worldly diorama inside the Museum and communicates with... 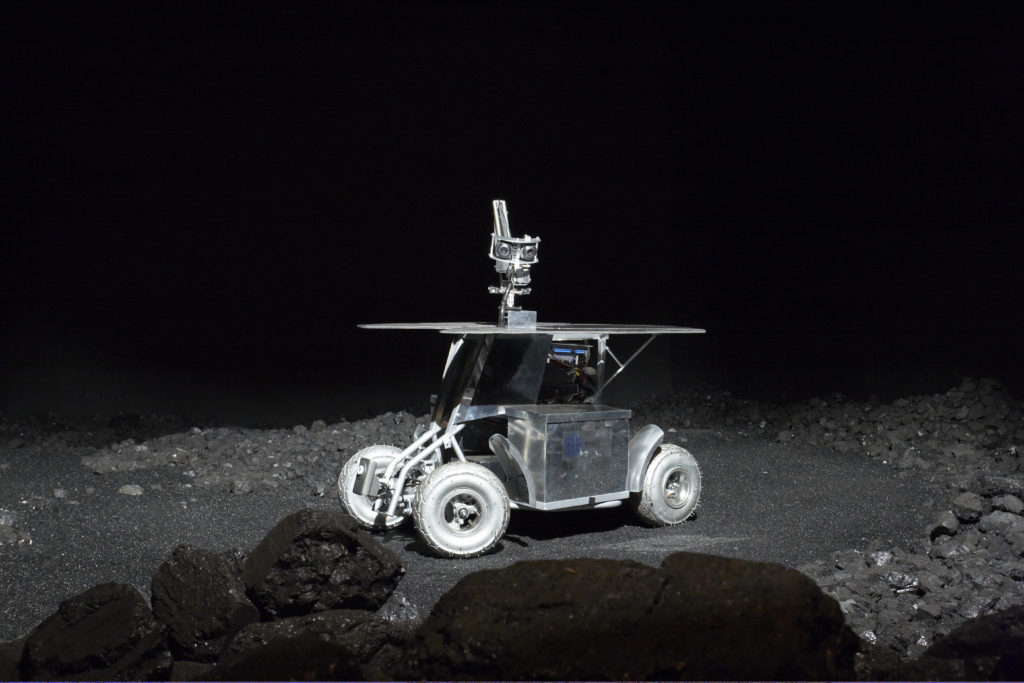 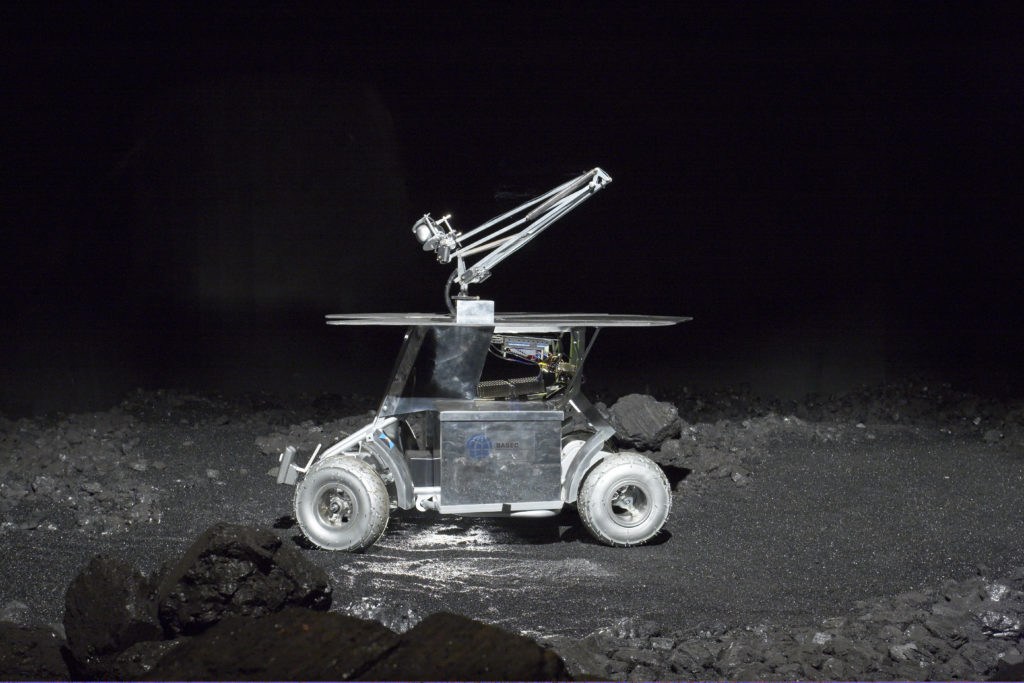 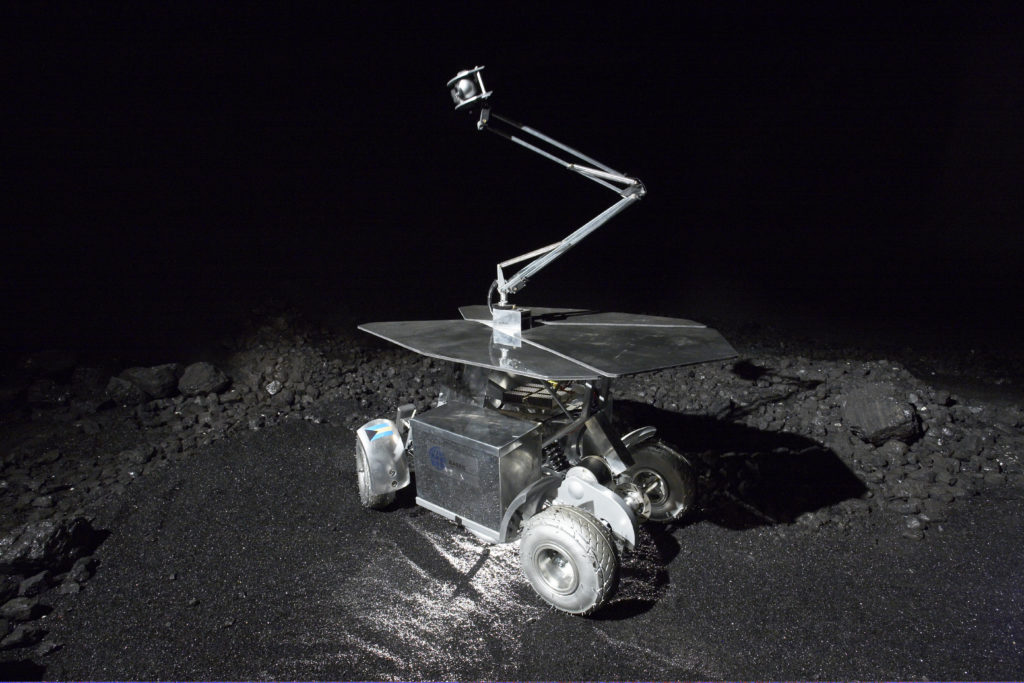 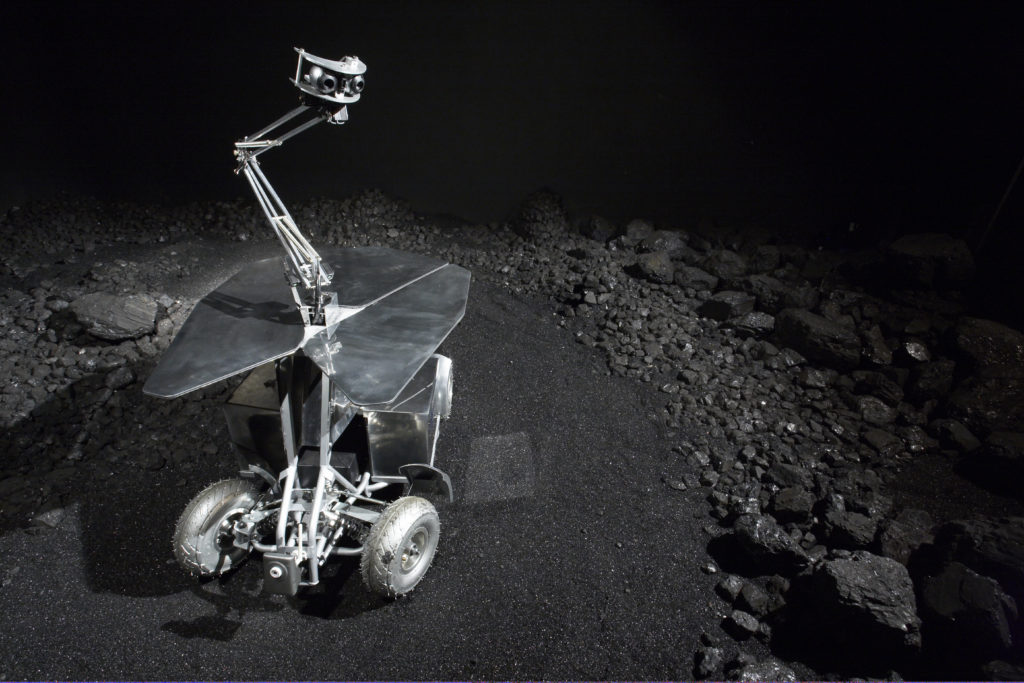 Working with scientists at Carnegie Mellon and Yale Universities, Strachan created a rover that inhabits an other-worldly diorama inside the Museum and communicates with the outside world through data transmission. Inspired by the landscape of the North Star Polaris, Strachan created a charred, coal-covered landscape where this exploratory robot roams. Named Robbie after Robert L. Lawrence, the first African-American astronaut killed during training, the rover is seen as an autonomous being by the artist, living a lonely life on a dead star. Strachan has created a sentient being that has its own intelligence and the ability to sense itself and the world around it. Communicating to the command center in the Museum parking lot, Robbie transmits data about itself and the interior landscape. The command center’s main task is to house the controls for the rover, being outfitted with an 8-channel data receptor, satellites and antennae and computers. There is also automatic feedback—so that the command center both receives Robbie’s data and sends signals to the rover every five to seven minutes. Robbie is encountered through a mediated image in the command center; we can see through the eyes of the rover, and yet we are allowed to be observers in the diorama on the third floor. Conjoining viewer with scientist, no one is a passive viewer. Strachan is, however, questioning what we think we know and what we think we see, and yet reminding us of the reality that we exist in an infinite universe.

The variety of rocks that form the diorama are carbon-based. By including coal in this work, Strachan makes the connection between here (Pittsburgh) and now (current time), and there (the dead star of Polaris 541 light years away). The work is a proposal for an actual rover that may be created some day. This project for the Mattress Factory is the theoretical underpinning for the idea. Strachan begins his exploration in the context of art and eventually these ideas and art projects may enter the real world. Strachan is currently engaged in a long-term project entitled The Orthostatic Tolerance (“orthostatic” means to stand upright, and “tolerance” refers to the ability to withstand pressure) to begin his mission into outer space and to the bottom of the ocean. Training to become an astronaut, Strachan is hoping to carry out one of the first missions—by a Bahamian—to leave the planet.

Tavares Strachan was born in the Bahamas and holds a BFA from the Rhode Island School of Design and a MFA from Yale University. Strachan’s work touches on many different issues: environmental, geographical, social, cultural, and historical. His most recent focus is on global warming and the recognition (or denial) of current and potential climactic changes in relation to the politics of global warming. Socially, Strachan has been working to involve communities of school children in the Bahamas through lectures, the tradition of oral story telling, and performances. His solo exhibitions include the Luggage Store, San Francisco; Ronald Feldman Fine Arts, New York; Pierogi 2000, Brooklyn; the Aubrey Sayle Primary School, Nassau, Bahamas; and the 2018 Carnegie International, Pittsburgh, PA.