The exposed walls of the basement could be part of some ancient structure with columns formed by stacked steel drums and topped with sandbags... 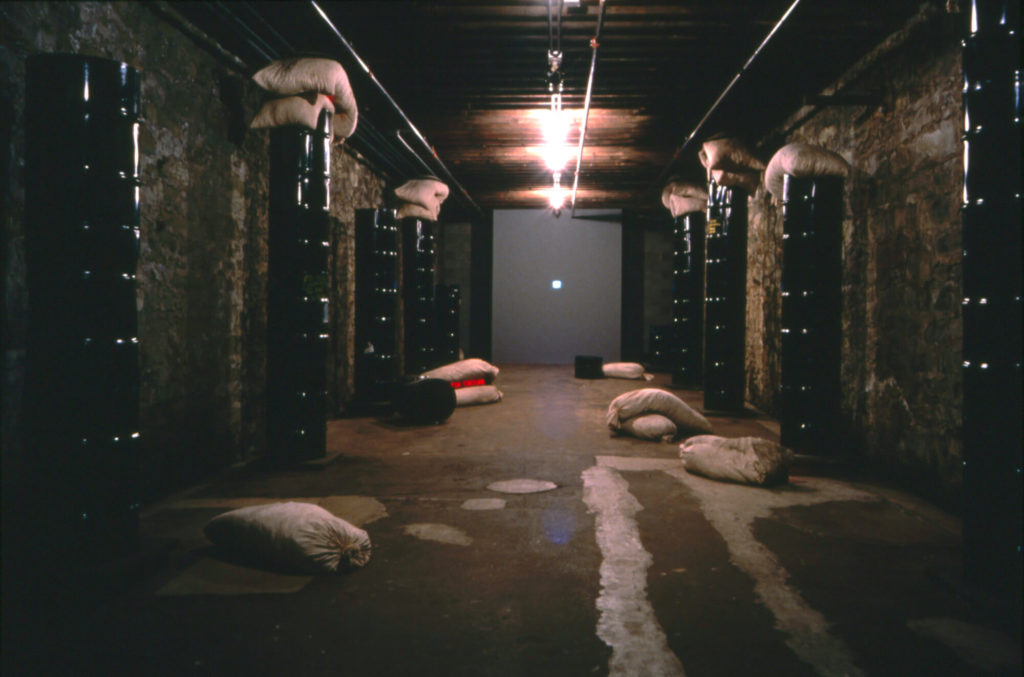 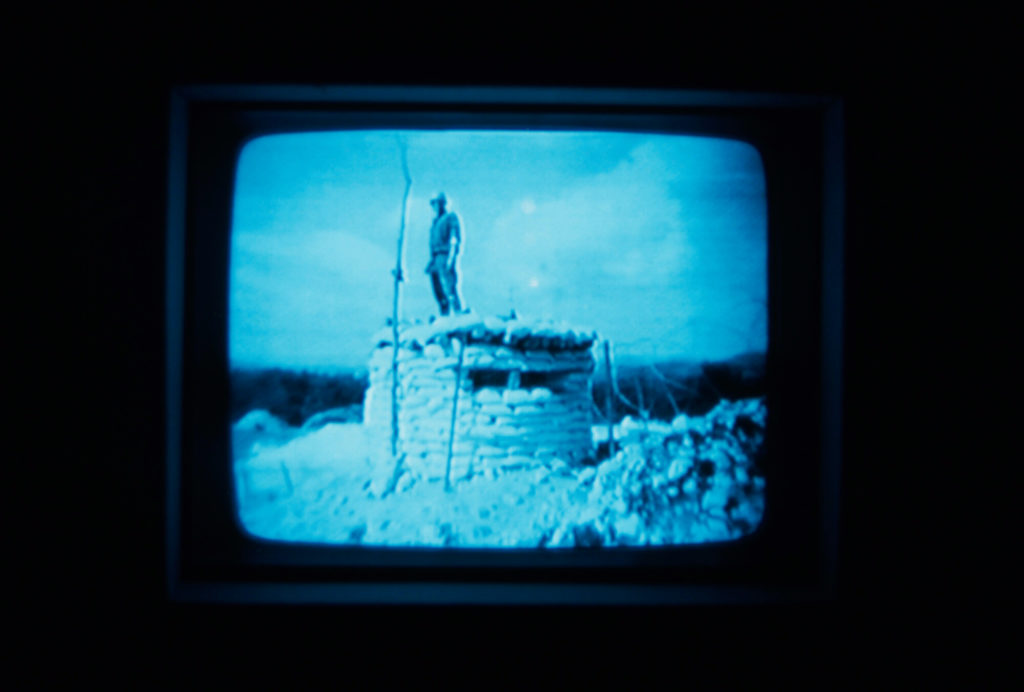 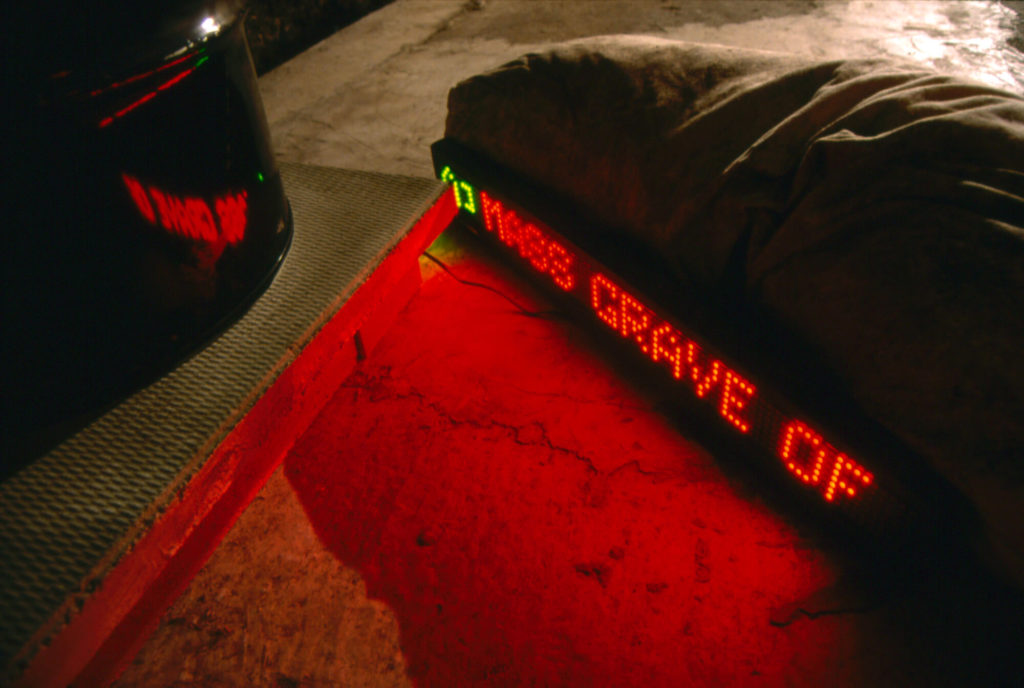 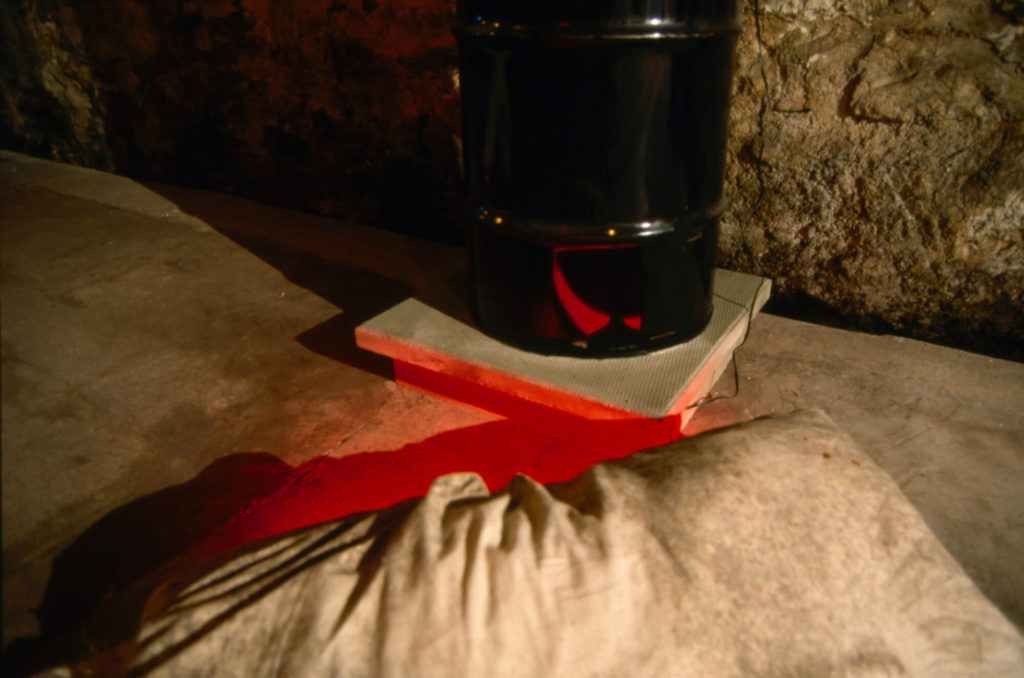 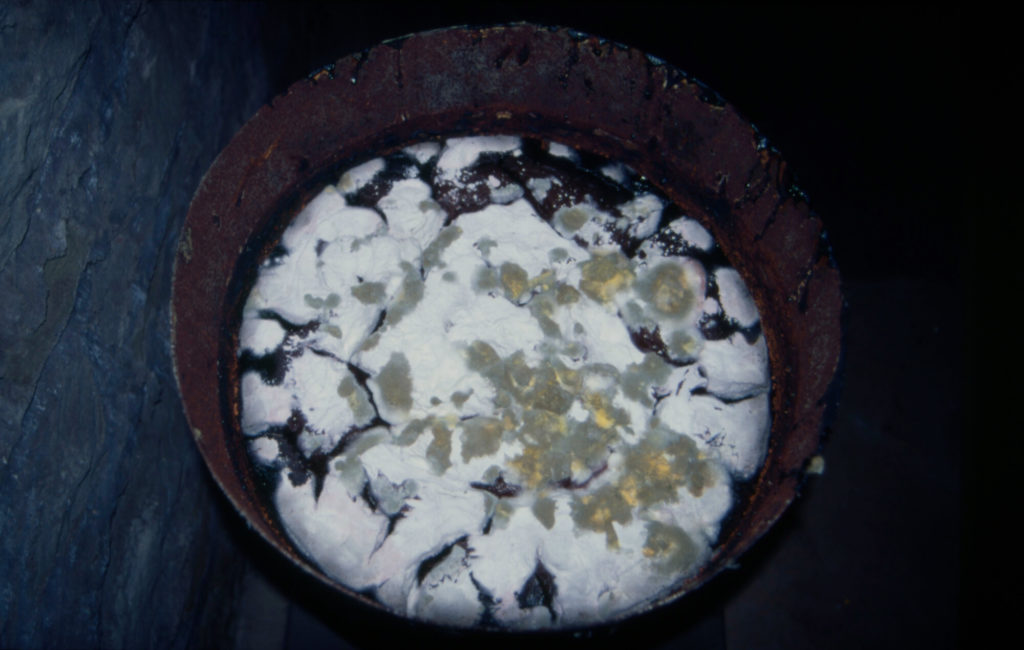 The exposed walls of the basement could be part of some ancient structure, with columns formed by stacked steel drums and topped with sandbags and LEDs. Text flashes from the LEDs – a jumble of phrases for public consumption that Meluzin gleaned from Pittsburgh newspaper headlines. Serious ones sit right beside those that are trivial and transient. A TV screen image of a soldier on a bunker in Bosnia is a classical composition, which Meluzin compares to Michelangelo’s David. The soldier in the photo died 4 days after the photo was taken. A steel drum filled with ketchup sits inside the entrance. The strong scent reminds visitors of hamburgers. Ketchup is a substitute for blood in Hollywood, and a reminder of Bosnia where blood flows as freely as ketchup.

MASS MEDIAL OUTBURSTS AND MASS CONSUMPTION OF WORDBURGERS, SACKS OF EMPTIED WORDS AND SACKS OF AN ARMY BUNKER WHERE WHATEVER WORDS ARE USELESS, HERE AND THERE ROMAN COLUMNS WHICH BEAR THE TRACES OF AN ANCIENT CULTURE AND SOMEWHERE ELSE AN OTHER PLATFORM MELTING ITSELF INTO RUINS UNDER THE BURDEN OF WORD NONSENSE, SOMEWHERE, SOMETIME THE KETCHUP IS AN IMITATION OF BLOOD, ANOTHER TIME, ELSEWHERE THE BLOOD IS WORTH NOT MORE THAN KETCHUP (RECYCLING OF KETCHUP AND BLOOD), MICHELANGELO’S DAVID IS IMMORTAL, DAVID OF BOSNIA ON A TREMBLING TV SCREEN IS (EXACTLY) TWO DAYS BEFORE HIS DEATH (RECYCLING OF ART AND LIFE?), MASS MEDIAL OUTBURSTS AND. . . . I’m not sure if this is an artist statement or just another wordburger. But perhaps the wordburger column has to go on. . . .

Peter Meluzin attended the Technical University in Bratislava as well as the Comenius University. From 1970 to 1976 he attended the Academy of Arts and Design in Bratislava. He creates media artworks and his work is important to Slovak visual arts.  He is currently a Director at the School of Applied Arts in Bratislava.