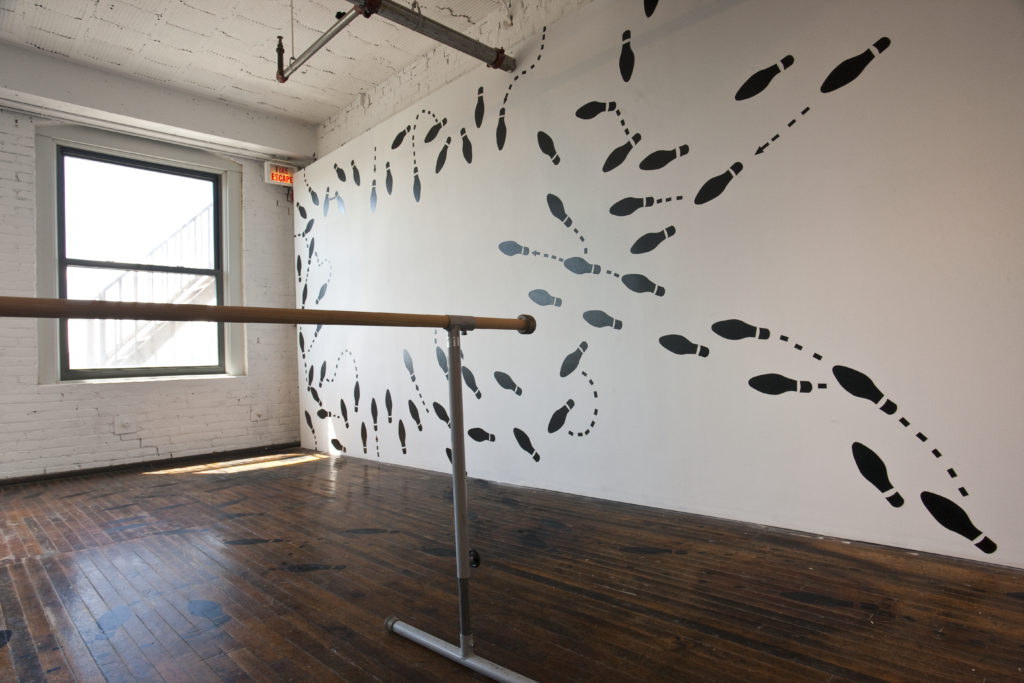 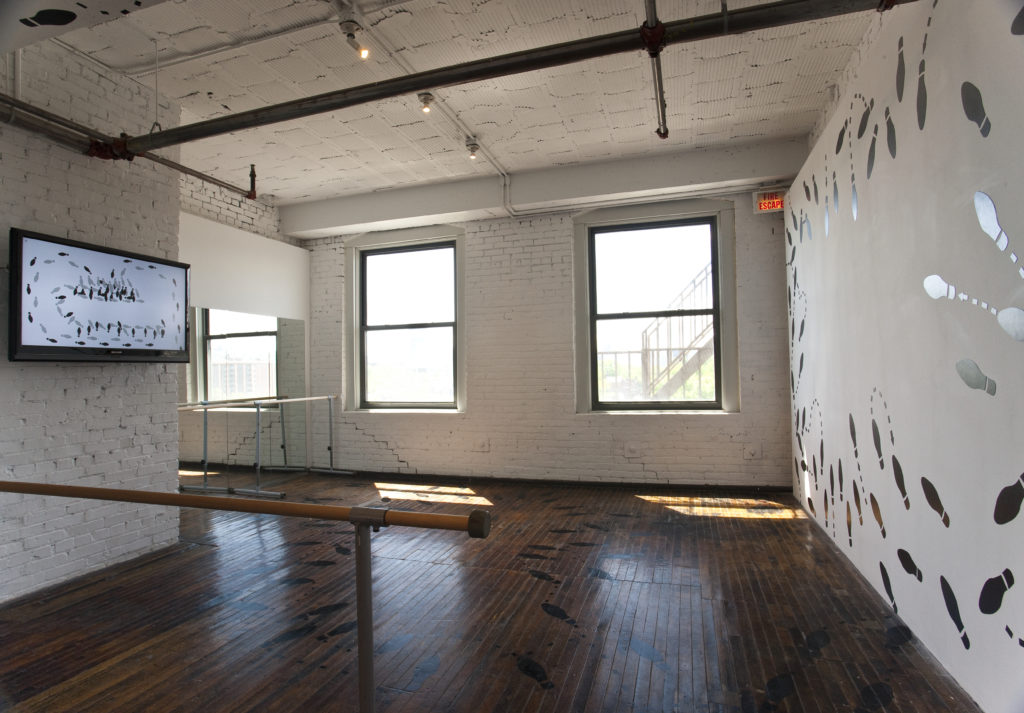 Every Person a Pollock! combines the imagery of Hans Namuth’s film of Jackson Pollock, Max Klein’s “Paint by Number” kits, and Arthur Murray’s dance diagrams. The result of this combination is an ad hoc dance studio complete with wall-sized mirrors, ballet barres, and life-size dance diagrams walking across the floor and up the walls, mimicking Pollock’s movements while painting. Jackson Pollock’s technique, often called action or gesture painting, can be seen in the video monitors on the wall. While dropping paint, he moves in, over, and around a horizontal canvas placed on the floor, an altogether revolutionary concept when first seen in 1947.

For this installation, we are motivated to investigate the process of making art at its most basic level—the actions of an artist as he (Pollock) creates art. We have documented Pollock’s footsteps and presented them in the manner of a dance diagram, similar to what one would find in an Arthur Murray ballroom dance class. The original music captures the rhythm of dancing and provides a soundtrack to accompany the animated video of Pollock’s movements. Similar to Max Klein’s “Paint by Number” kits which proclaim “Every Man a Rembrandt!” on the cover, anyone can produce “fine” art if given step-by-step instructions. As seen with the magnetic Pollock “Left” and “Right” shoeprints, each viewer can retrace his steps on and around the painting and arrange more feet as needed. We invite anyone to literally follow in the footsteps of Pollock, while creating art as a work of walk. Every Person a Pollock!

Heather Pinson (American, b. 1976) is Associate Professor of Media Arts and Associate Professor of Communications at Robert Morris University. After training as a classical violinist at Samford University, where she received her BFA in Music, Heather began studying jazz violin at Louisiana State University where she received her MA in Musicology. Heather obtained a Ph.D. in Interdisciplinary Arts from Ohio University in 2007.

Matthew Conboy (American, b. 1977) is an artist and photographer working in Pittsburgh, PA. After earning a BS in Architecture from the Catholic University of America, he studied Photography at Virginia Commonwealth University where he received his MFA. His previous work includes tracking the movement of the population center of the United States that is recorded after each census and creating an archive of Soldier’s medal ribbons from the Iraq War. He is currently conducting a re-photographic survey of W. Eugene Smith’s Pittsburgh Project as part of his dissertation at Ohio University.

Parasitic Reflectivity in a 90° Two-Step

The Residents of Chelm Visit the Mexican War Streets

Talk to Me: Real Words from Real People