I was interested in uncovering the urban and natural history here to reveal the physical memory in the site. Everything in the garden comes from this: all the different layers and boundaries. 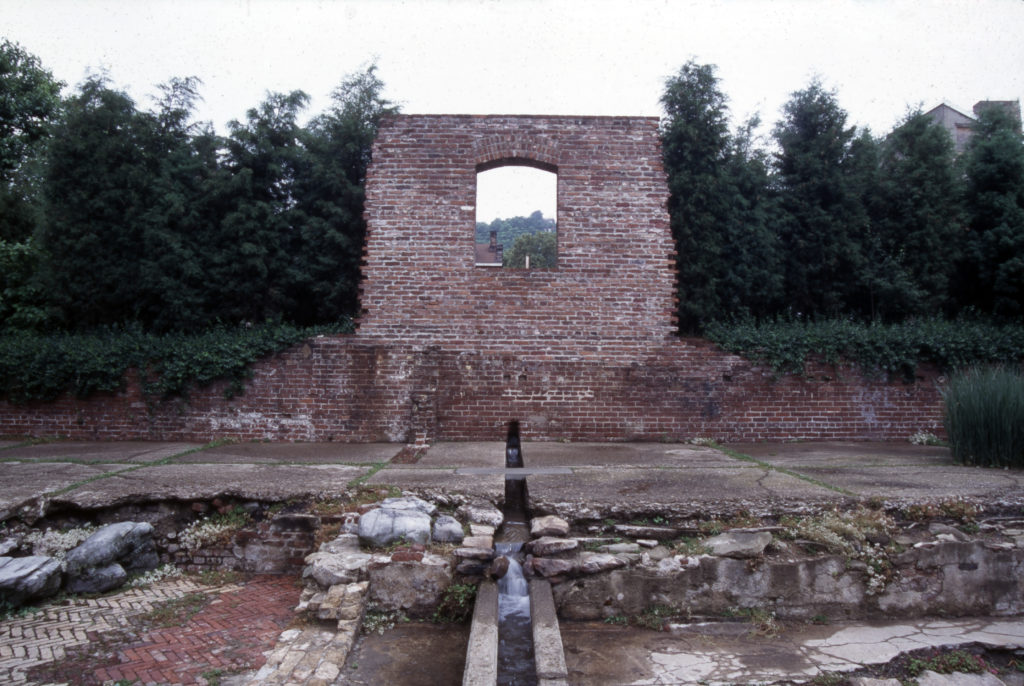 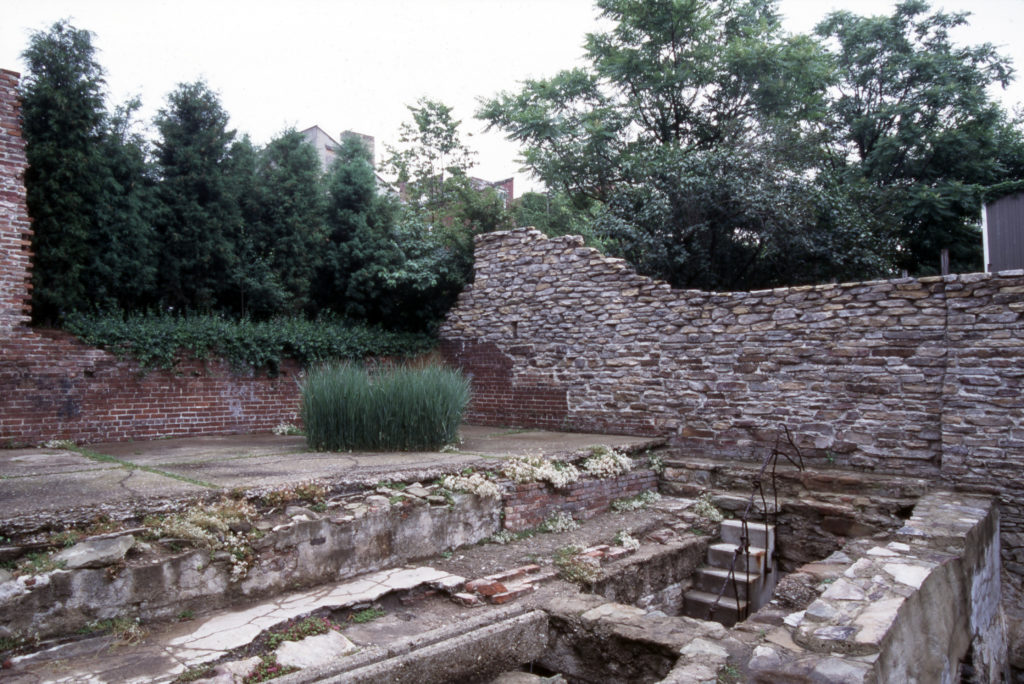 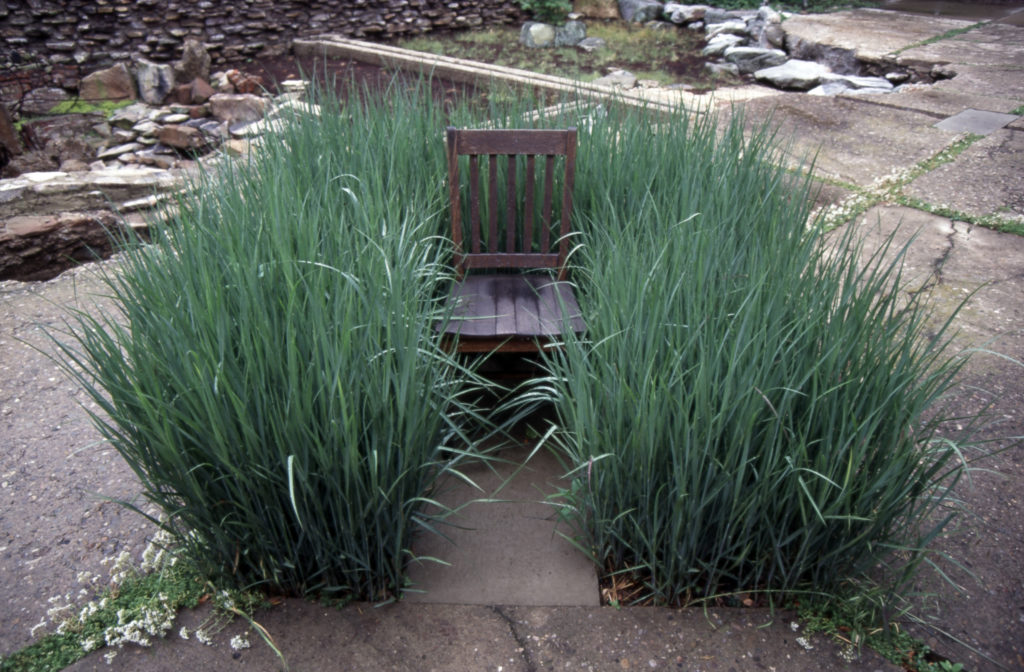 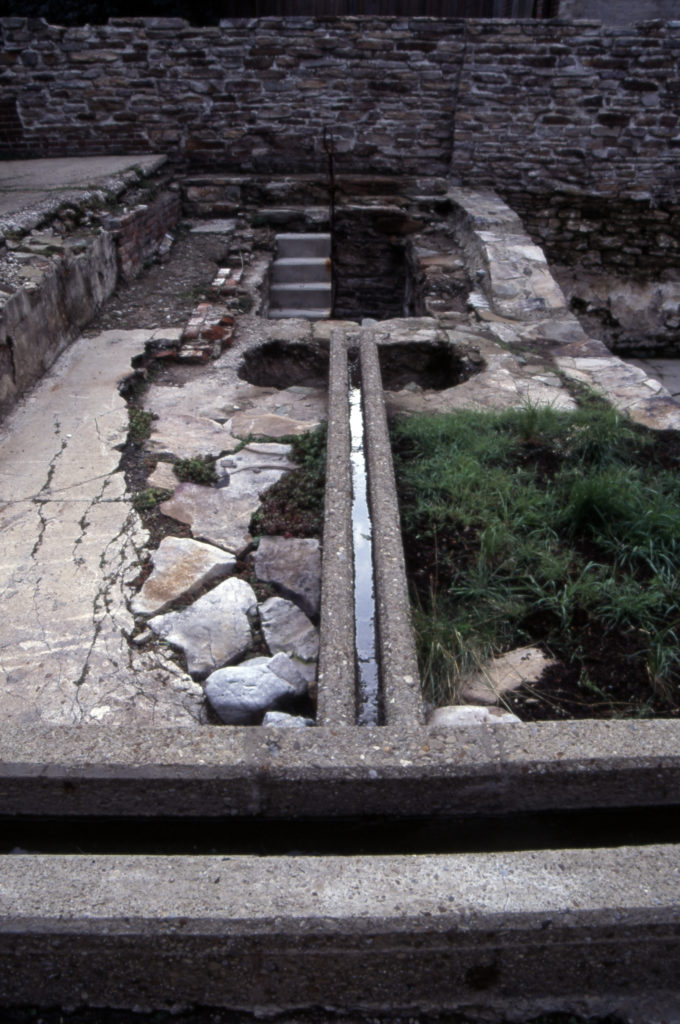 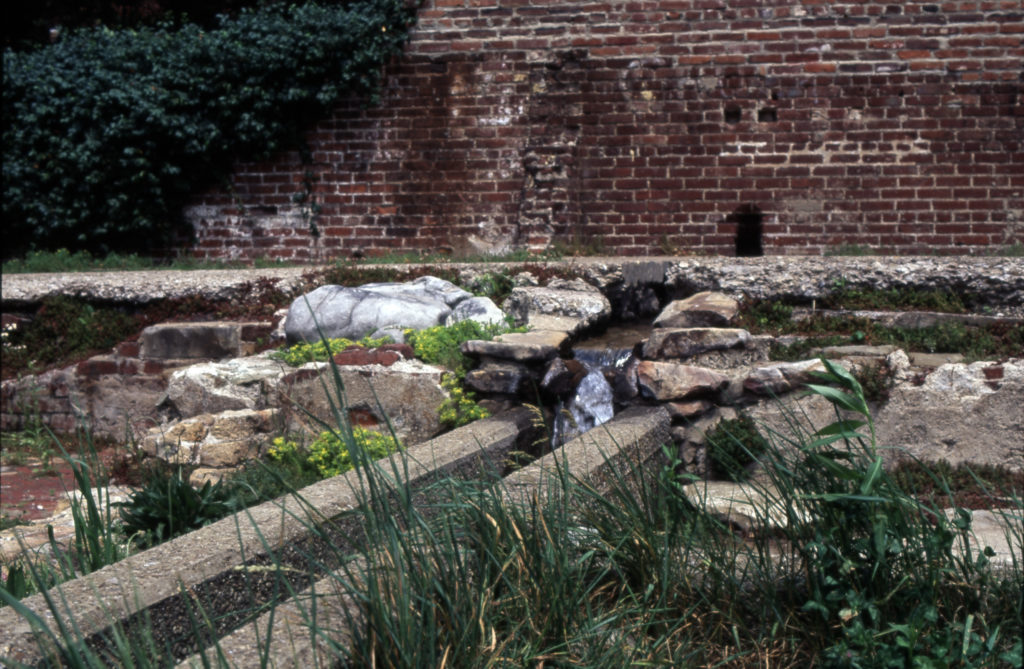 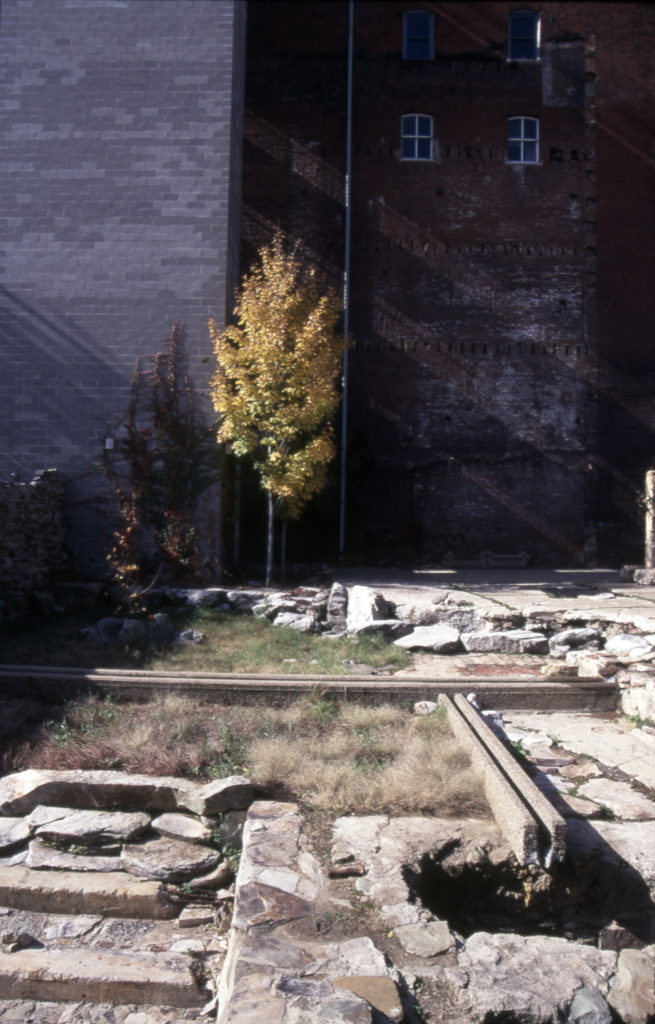 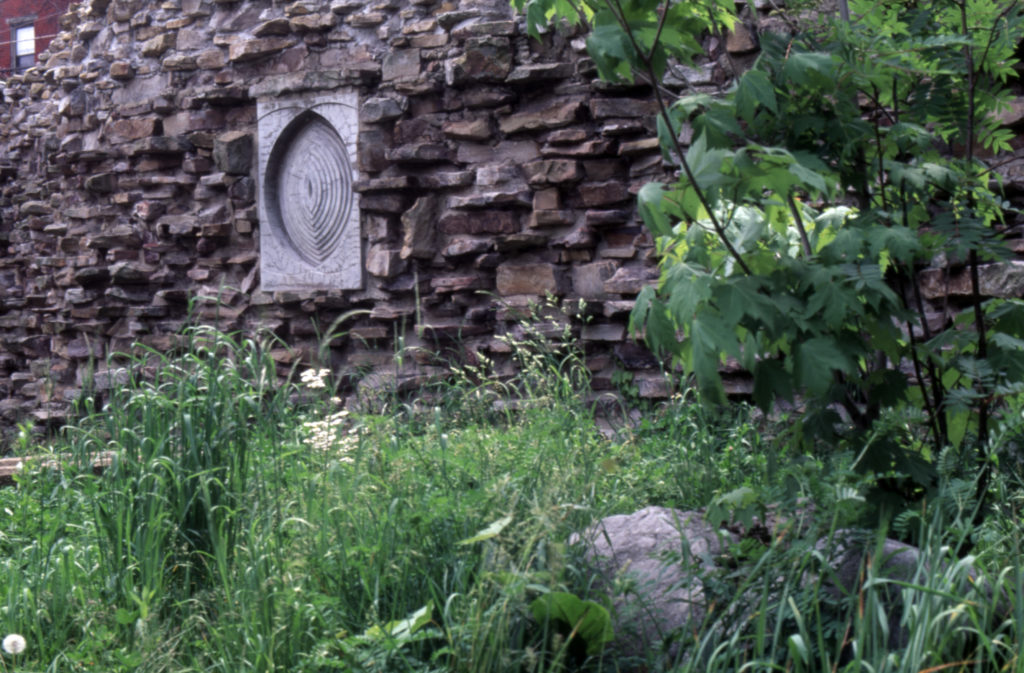 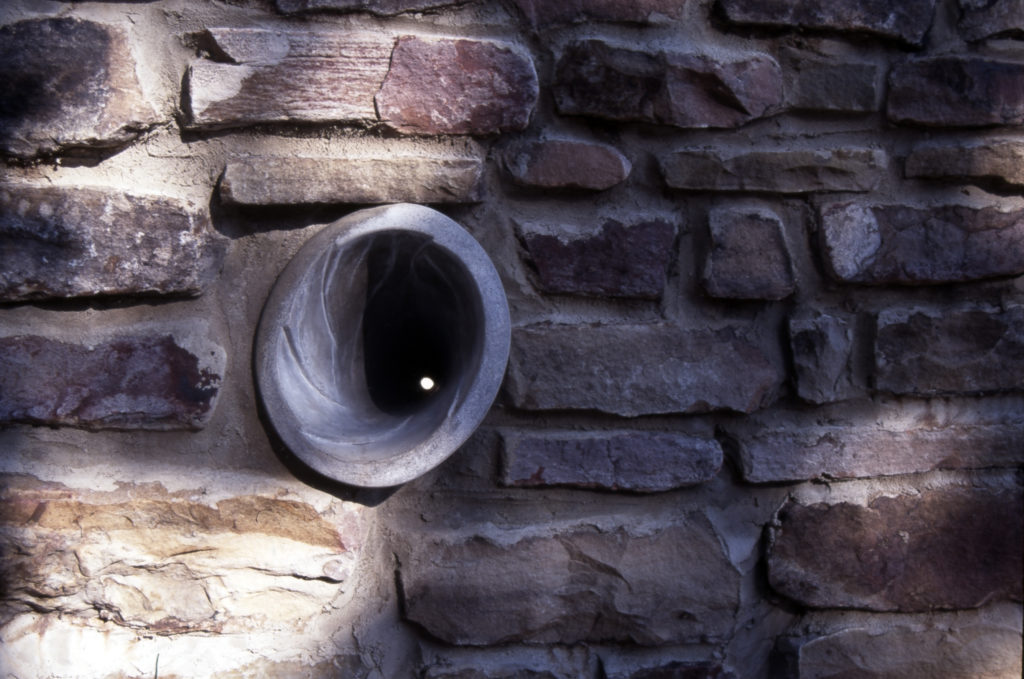 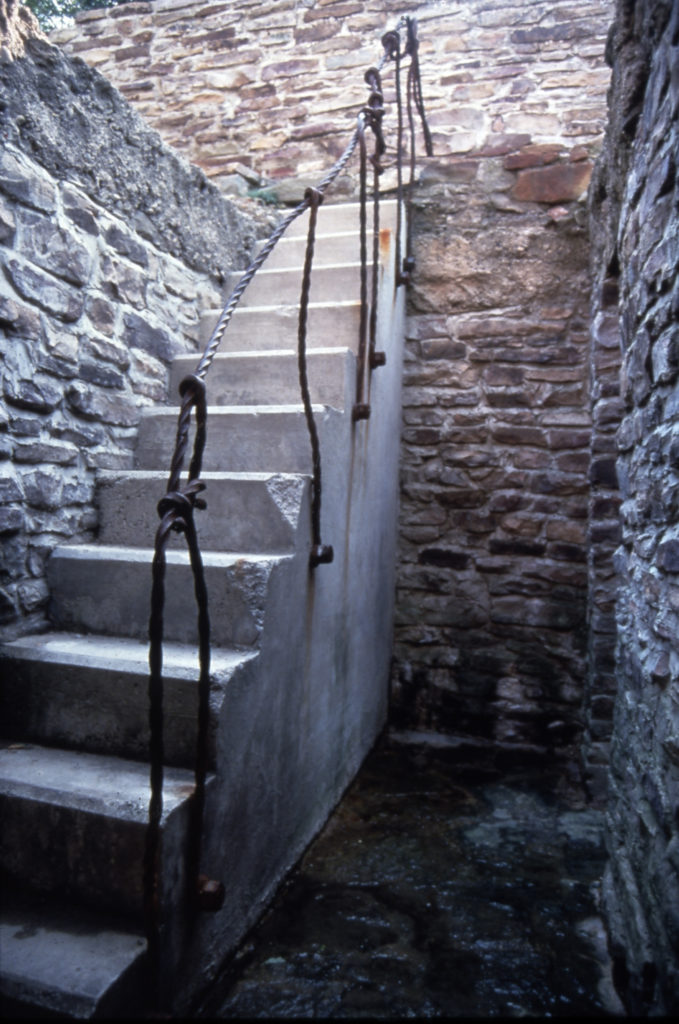 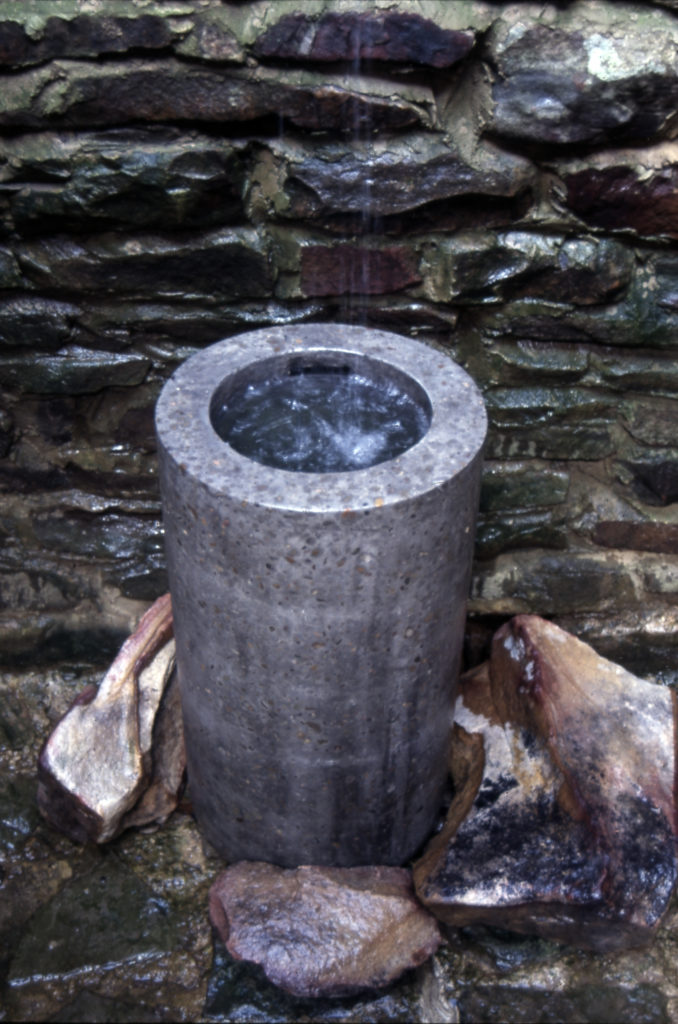 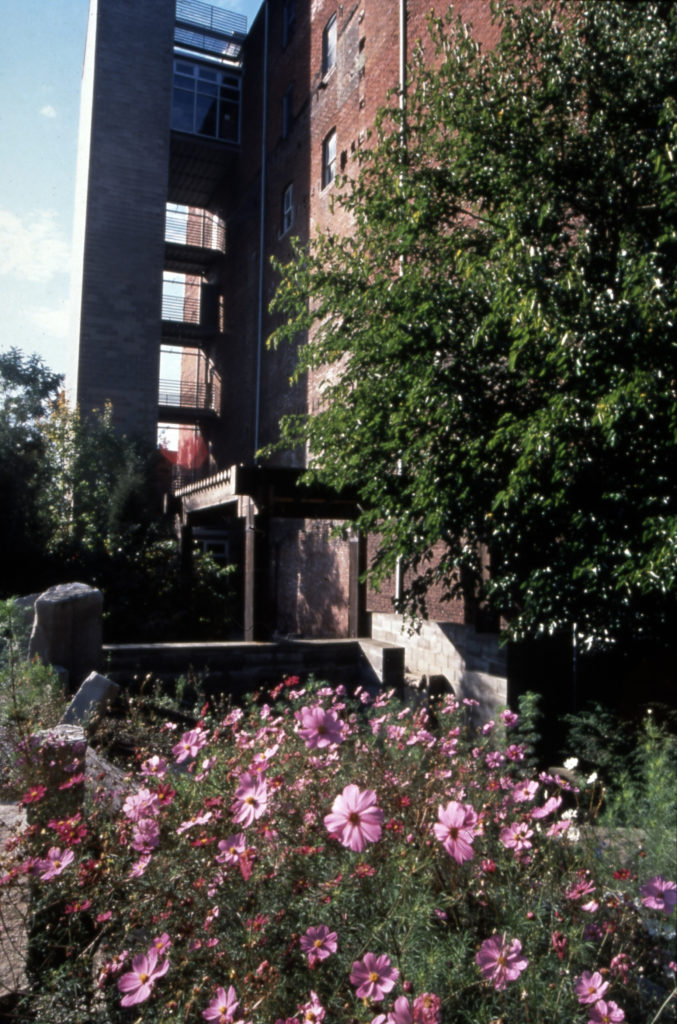 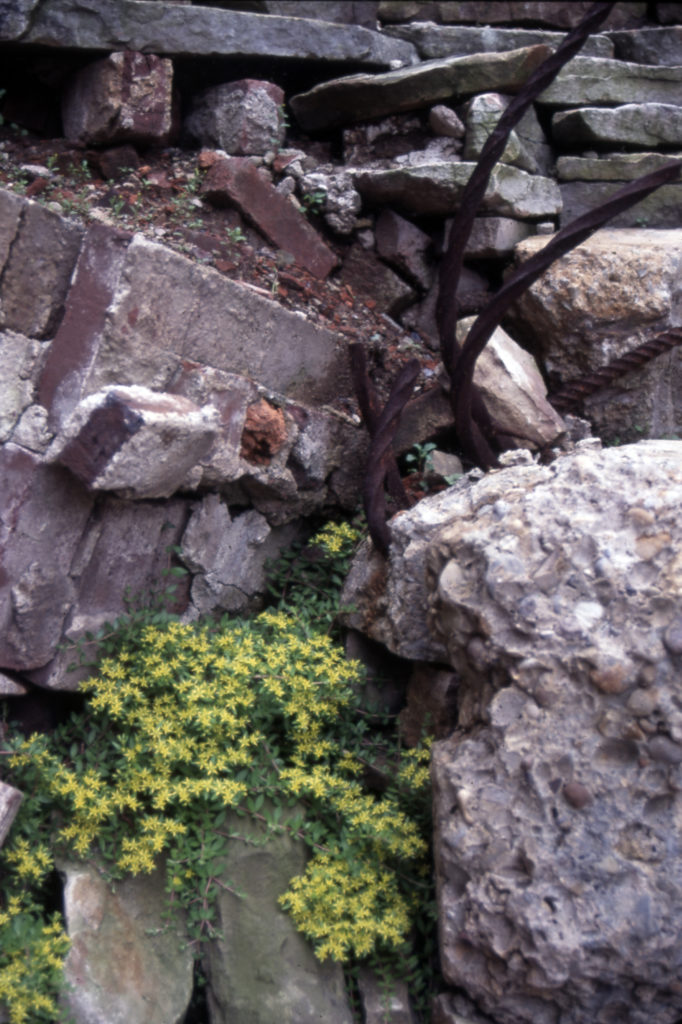 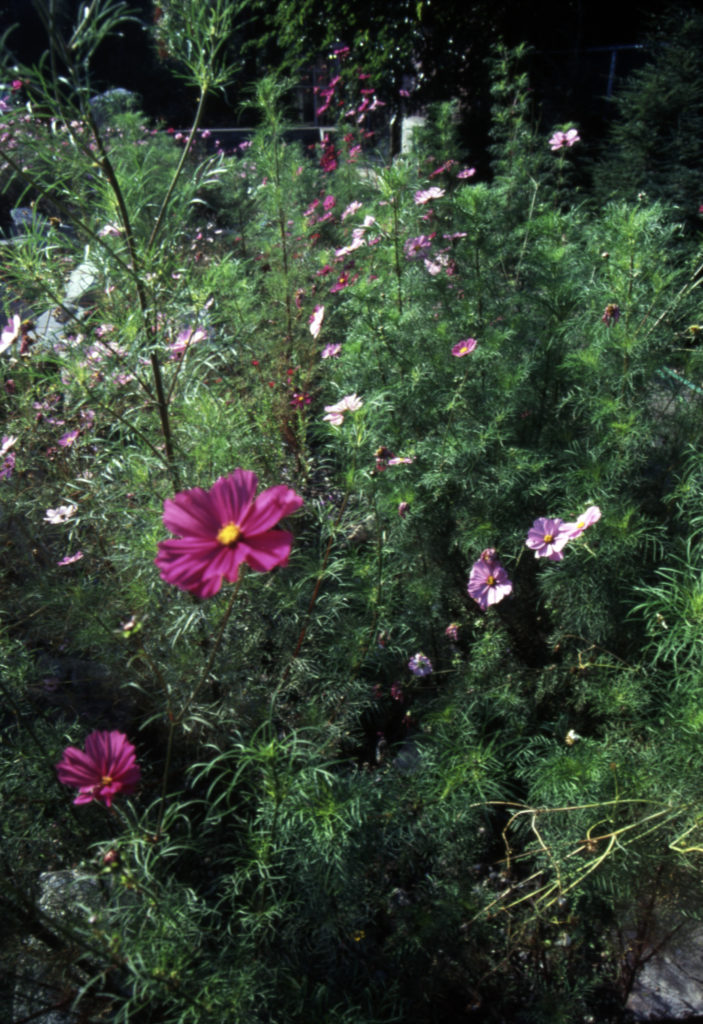 In late 1800s and early 1900s, Italian immigrants settled in the neighborhood surrounding what is now the Mattress Factory. Many of them worked in agriculture-related jobs, including food production and cooking, as grocery store operators and as vegetable hucksters. The history of the Mattress Factory building directly reflects this fact.

On the site where the garden now stands, was a four-story brick building constructed in the 1890s for the Italo-French Macaroni Company. It was owned by a Mr. Pivorotto who lived nearby. In 1900, a six-story addition was constructed, which now houses the Mattress Factory. According to a long-time neighborhood resident, Mrs. Mary Marasti, the macaroni was manufactured in the four-story building and dried in the six-story section. The macaroni company moved out of these buildings to another North Side location around 1930.

The buildings were vacant for much of the 1930s – the Depression – but were used to store and sort clothing and other materials for relief for victims of the 1936 St. Patrick’s Day flood. With economic recovery in the late 1930s, the six-story portion of the building was occupied by the Gorman Candy Company and the four-story building was occupied by the Stewart Paper Company from the late 1930s until 1963, when it burned to the ground.

By the time Winifred Lutz began work on her permanent outdoor garden installation in 1993, she had already studied the site for five years. She used the information she had uncovered – both historical and physical – to design a garden that responded to and incorporated the history and attributes of the site, including the foundation of a building that had burned many years ago.

The three-quarters of an acre adjacent to 500 Sampsonia Way is a living work. An enclosure for a single chair is surrounded by tall grass. A trellis, made from huge wooden beams, acts as an entryway from the parking area. Water flowing through a concrete trough splashes and gurgles. Large stones, individually selected from a western Pennsylvania quarry, dot the landscape. Cast cement apertures in the brick and stone walls frame specific views. Twisted rebar railings descend 10′ below ground level to a cement basin filled with water. Newly-planted trees and indigenous wild flowers attract birds into the urban garden.

The Heinz Architectural Center of The Carnegie Museum of Art featured this garden installation in its 1996 exhibition, “A Century of Women Landscape Architects in Pittsburgh.”

I was interested in uncovering the urban and natural history here to reveal the physical memory in the site. Everything in the garden comes from this: all the different layers and boundaries. The garden is a vignette of past times within the framework of contemporary Pittsburgh, like archeological sites in Rome and Jerusalem. From the outset, I wanted to use the architectural remains of the lot: the basement filled with debris from the burnt factory, the cistern, the concrete slab and the brick retaining wall. The window wall is built with bricks excavated from the basement. As you look through the opening from outside the wall, your gaze is directed along the water trough, through the brick window and up the hill, connecting interior and exterior spaces near and far. The arbor in front of the window was designed to be like a room from which to view the garden below. From there, you walk down the stairs to the pergola structure which serves as a vestibule to the garden. As you proceed into the garden, you experience the different levels of the site, exposing layers of natural and architectural history. The plantings in the garden reflect the field/forest ecology of Pennsylvania. The indigenous trees, shrubs, vines and grasses are what might be found in a field in transition. The wall of red cedars recalls the wall of non-native ailanthus and mulberry that divided the former vacant lot. Red cedars are the “advance guard” that grow in a field before the larger trees take over.

The Private Prairie – the square of switchgrass with the chair in it – changes with the seasons. It is a cyclical event. In summer and fall it can be both an intimate and a big space. When you sit in the chair, the grass is so high that you can’t be seen and you can’t see out. You have a Private Prairie as if you are sitting in the middle of a vast sea of grass. Built from the same variety of local stone as the original basement walls, the garden wall is also built in the same fashion. The rough surface toward the garden interior simulates the appearance of the back of the basement wall, which comes from being built directly against the earth. Water emerges from the brick retaining wall to flow back into the stone beneath the viewfinder in the boundary wall and to be diverted to fall into a basin in the stairwell to the basement, cooling the space and intensifying its privacy with a screen of sound. The water trough in the garden divides the natural history and the urban history of the space, and connects the upper and lower levels.

The “amphitheater” steps and the upright column are the factory’s collapsed concrete floor beams, with the original reinforcing bars used as both decorative and functional elements. As you look to the lower level, the memory of the fields and glacial moraine are to your right and the excavation of the paper factory is to your left. The viewfinder at the end of the water trough is in the form of two intersecting circles which occurs as a symbol in Christian art. Its use in the garden was very much influenced by the fact that the neighborhood had been predominantly Italian and Catholic. Symbolizing overlapping concepts, in the most basic sense it represents the profane and the sacred. In terms of the garden, it refers to the past history and the present, the neighborhood and the Mattress Factory, and the natural history and the urban cultural history. The cone-shaped viewfinder is an abstraction of the shape of the wild morning glories that grow all over the fields in the neighborhood. As a conical shape, it concentrates the view from the outside onto the boulders; while from the inside, you see a tree and a row house, making a connection to the surrounding neighborhood.

Winifred Lutz attended the Cleveland Institute of Art for her BFA as a triple major in Printmaking, Sculpture, and Ceramics. From 1965-1966 she received the Gund Scholarship to study and travel in Egypt and Europe. In 1968 she obtained her MFA in Sculpture from the Cranbrook Academy of Art.