With their help and participation, Newman sought to show how Russian parents and grandparents explained Communism and the Cold War to children, in both her St. Petersburg neighborhood and Pittsburgh’s Russian diaspora. 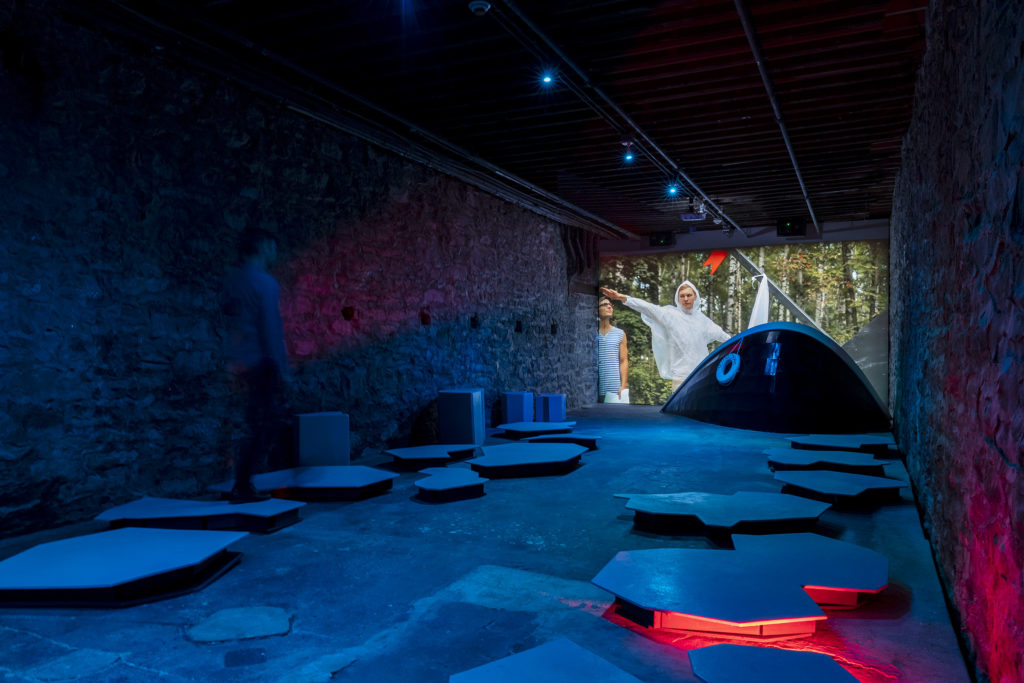 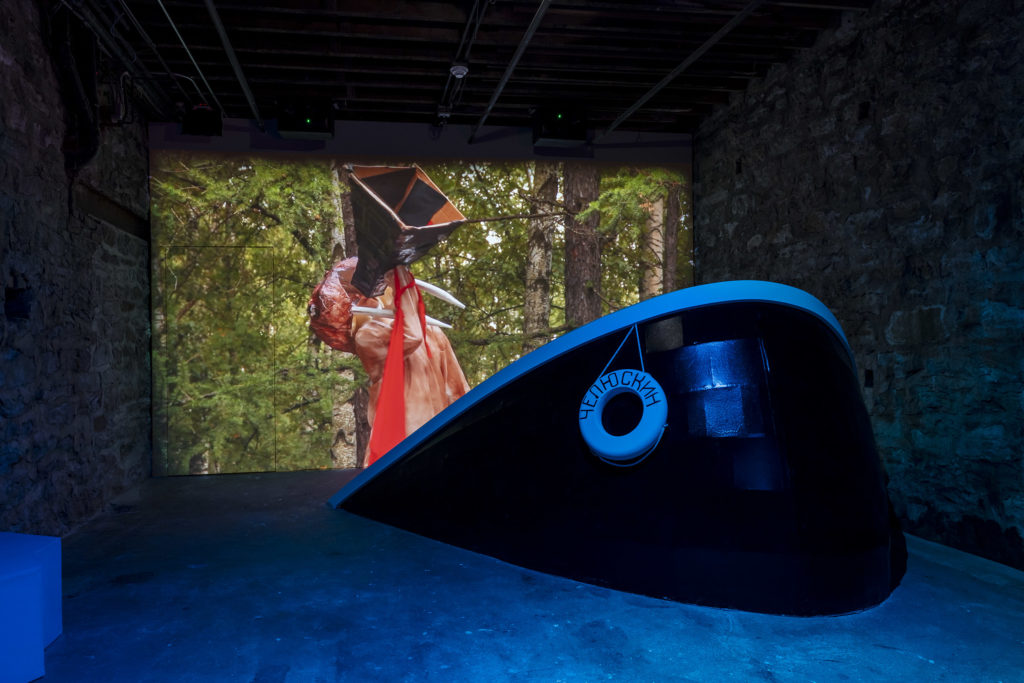 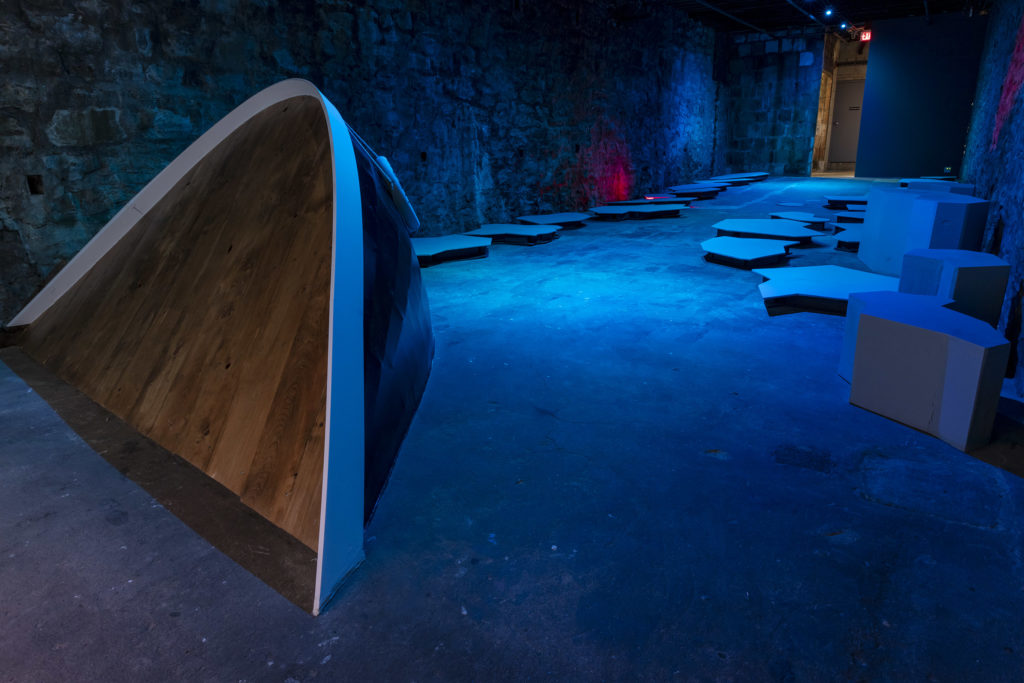 The four films on view here chronicle Emily Newman’s experience raising a child in Russia, just as 21st century Russians were struggling to process their volatile national story into child-size spoonfuls. With their help and participation, Newman sought to show how Russian parents and grandparents explained Communism and the Cold War to children, in both her St. Petersburg neighborhood and Pittsburgh’s Russian diaspora. In light of Vladimir Putin’s brutal effort to rewrite and rebrand Russian history, her project was anything but an exercise in nostalgia.

Mama, Rock ‘n Roll Wolf, and Polyteknicheskaya; Don’t Love Here were made as Newman raised her son Isaac, born at the end of 2005. Both films address the persistence of national myths in children’s culture after the dissolution of Communism and the collapse of the Soviet Union. Cheap DVDs of Soviet children’s cartoons, still on sale at supermarket checkouts, were Isaac’s entertainment as ad restless toddler. His nanny, Natasha, was an archetypal “Soviet Person.” So were the teachers at his local school, whose lessons had a classic pull to the left. They emphasized the collective, group work, shared enterprise, exempting Isaac from American exhortations to “follow your dream.” Fascinated by the ideological and imperial ghosts haunting Isaac’s schools and playgrounds, Newman tried to capture them in Mama/Rock ‘n Roll Wolf, even as the neighborhood where she lived—the focus of Polyteknicheskaya; Don’t Love Here—was being slated for post-Soviet demolition.

Polyteknicheskaya/Don’t Love Here, is a love letter to a leafy neighborhood of august scientific institutions and early Soviet-planned apartment blocks in the northeast of St. Petersburg. In 2011, as Newman was getting ready to leave her home there and feeling brokenhearted, Polyteknicheskaya was about to disappear under the wrecking ball. Two local landmarks—the site of a famous lovers suicide, and that of an experimental nuclear-fusion reactor (which may yet solve the climate crisis)—are eulogized with the help of local artists and children from the neighborhood kindergarten.

The spark for Mama/Rock ‘n Roll Wolf was Newman’s discovery of a Soviet children’s movie based on a fairytale by the Brothers Grimm: The Wolf and the Seven Little Goats. In it, Brezhnev-era pop stars dance and sing of a mother goat’s desire to “go to the fair” without her kids—that is, to escape her duties. Before leaving, the mother tells her babies to keep their door locked. She teaches them a tune that she will sing on her return. But a wolf is listening. He sings the song. The children open the door. The wolf eats them.

The tale struck an uncomfortable chord with Newman: Every day, she was leaving home for work, and handing her toddler to a Russian mother-substitute. Isaac was learning Russian, but refused to speak it with his true mother. Feeling excluded, Newman rewrote the script and cast herself as the wolf. In her version, she is trying to trick Isaac into opening his Russian door. The film’s title refers to two Soviet-made versions of the fairytale: one in Russian, a second in English. Mama, in Russian, enchanted a generation of Russian children. On the international market, Rock ‘n Roll Wolf was a flop.

THE ARCTIC: Where the Cold War was waged in a cold climate, and where a climate now heating up might yet ignite a hot war. In St. Petersburg, Russia’s metropolis of the north, Newman’s attention turned toward the ice. In one Arctic film, she brought children and their elders together to retell a tale of Soviet heroism. In a second, she traveled to Russia’s face-to-face border with NATO to reinvent, through children’s eyes, a Cold War incident first fictionalized on screen as a 1960s Rock Hudson Hollywood thriller.

The New Chelyuskinites draws on a saga of Communist adventure-seekers who set off in 1933 aboard the SS Chelyuskin in quest of a polar route from Murmansk to Vladivostok. Trapped in the ice, the ship broke up and sank. The crew’s survival and rescue entered Soviet lore as proof of the virtues of Leninist grit. Newman reworked the tale in St. Petersburg, and later in Pittsburgh, with the help of local children and elderly Russians.

Her project was meant to encourage dialogue on ideology’s faded ideals. Instead, just as Russia was annexing Crimea in 2014, it provoked arguments over heroism, faith and truth. At the Museum of the Arctic in St. Petersburg, where it premiered, some of the museum’s “keepers of history” greeted the film with attacks on Russian artists who endorsed the project’s premise that history is a work-in-progress. Today, many of those same artists have joined Russian history’s deep ranks of muzzled dissidents.

Ice Cream Station Zebra (the jokey former name of a Pittsburgh hot spot) is Newman’s take on some real-life Cold War exploits that were mashed into a novel by Alistair McLean, and then into a passably klutzy movie. As the plot goes, a spy satellite loses a cache of film canisters over the ice, pitching Americans and Russians into a race to “capture the secret.”

In her version, Newman turned the intrigue into a “cultural exchange” reminiscent of the Cold War’s pauses for “detent.” Shuttling between Kirkenes in Norway’s far north, and Russia’s smelter town of Nikel, she brought Russian and Norwegian kids together, on plywood sets, for a giggling chase after the missing secret capsules. They communicated via “Zebra-Com” (Skype) with Pittsburgh kids in a plywood submarine at the Children’s Museum.

But that was then. Now, those budding friendships have suffered a sudden frost. Ice Cream Station Zebra was played out on a fault line between the old Cold War, where the rules of the nuclear game were known to both sides, and a wickedly hot new war whose rules are known to only one man.

A footnote to this film hints at the coming change in the world’s political climate. It involves Frode Berg, the retired Norwegian border guard who told Newman of his warm feelings for the Russian people. The last anyone heard of Frode, two years ago, he was being sentenced in Moscow to fourteen years in prison as a NATO spy.

Emily Newman, born in Singapore and raised in the UK, is currently based in Pittsburgh, Pennsylvania. She received her MFA from CalArts and has shown internationally—including at the Taylor De Cordoba gallery in Los Angeles, the Anna Akhmatova Museum and at Manifesta 10  in St Petersburg, and the Klaus Von Nitchtssagend Gallery in New York. Her work has been critically reviewed in publications such as Art Review, The Los Angeles Times and Artforum Intl.  She received a Fulbright to go to Russia in 2005 and spent the next decade in and around St Petersburg teaching at The Finnish Academy of Fine Arts and at St Petersburg University, where she formed a fledgeling program in Contemporary Art at Smolny College and TOKAMAK, a structured residency for artists on the Finnish island of Suomenlinna that lasted eight years. Today she teaches art full time at Catalyst Academy, an elementary school in the Larimer neighborhood of Pittsburgh, where she continues to look for ways to empower children to make sense of their lived contexts through visual expression. Her works on show at the Mattress Factory draw from the years she spent in Russia and explore methods of attaining self-knowledge through model-building and historical-reconstructions-gone-wrong with children and their families.

I come from a holy place