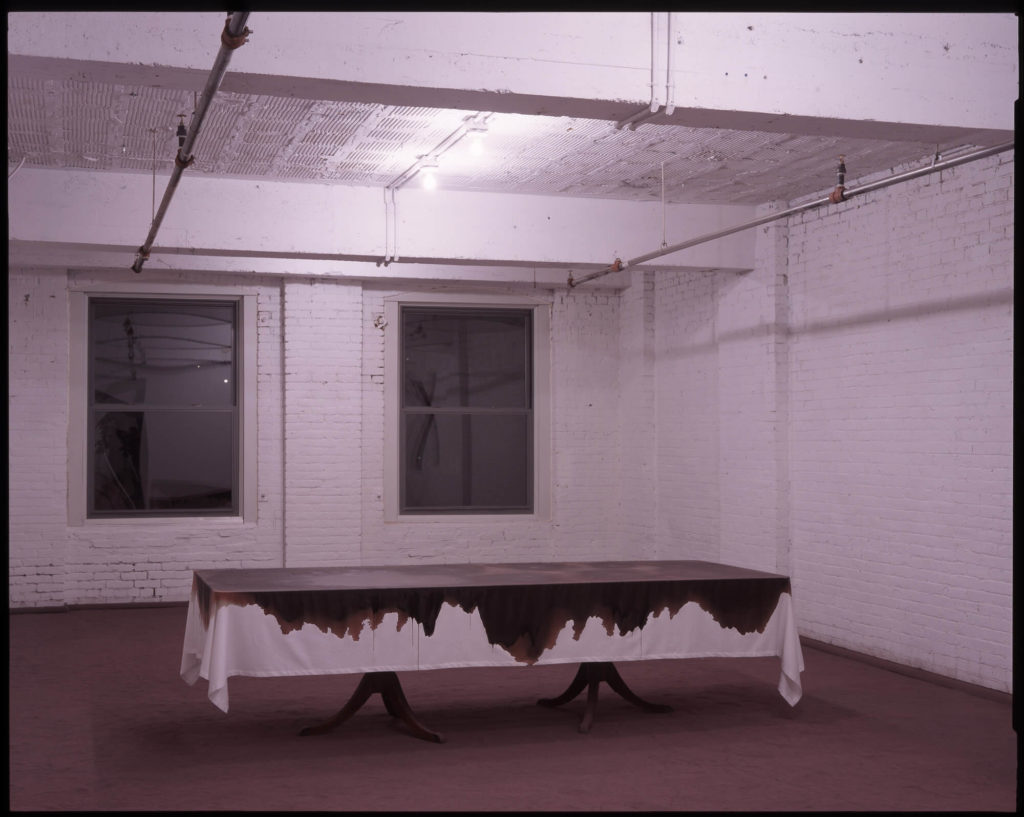 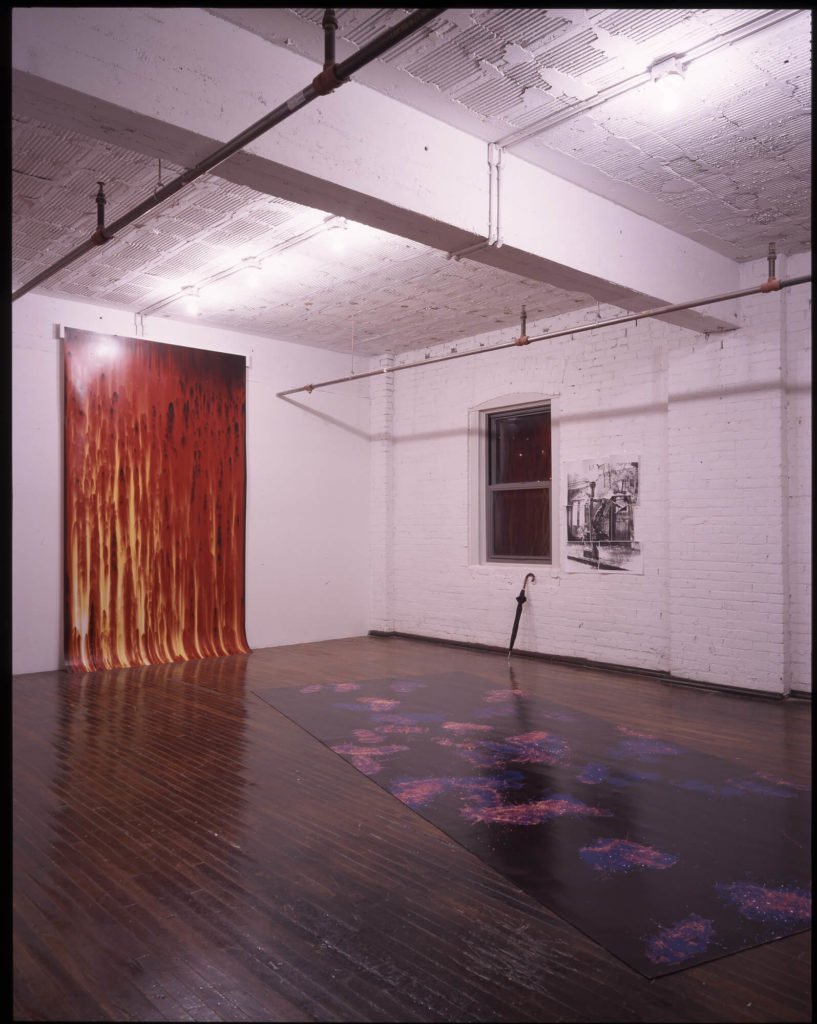 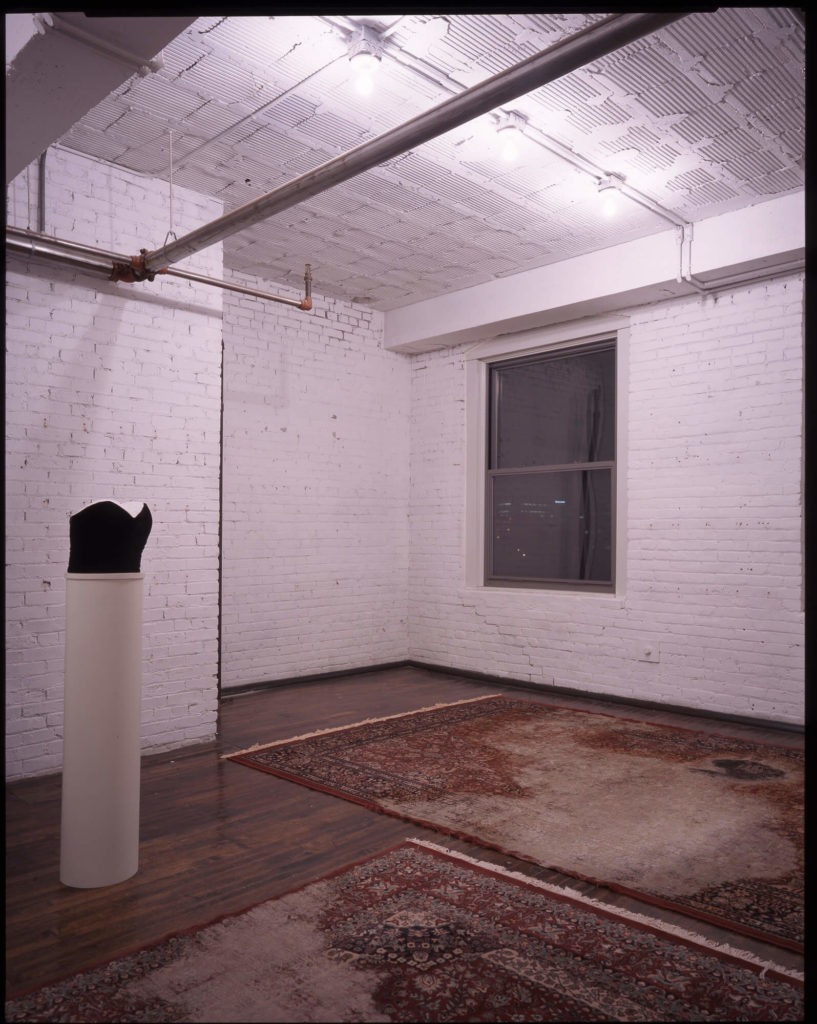 Curtis Mitchell’s installation takes place in three adjoining rooms. The first room has a 12-foot table with a white tablecloth stained with household products that sits on a floor of dirt made from the artist’s recipe. The second room has exposed photographic paper that the artist danced on with caustic chemicals of additional household products that records Gene Kelly’s Singing in the Rain performance. In the third room, two new Oriental rugs have been burned and then washed. The room also includes a bustier filled with Nivea moisturizer.

I am playing with the idea of usage, but also with the sense of the conceptual process. The conceptual process is the thread that runs through everything. There are no found objects in my work. I need to buy them new, because they are pure, pristine and untouched. Since I am working with usage, I do not want to have products that invoke someone else’s usage. In my studio, I add usage.

All of the materials in the two side galleries are from domestic environments. The far gallery contains reconstituted dirt that I made. The dirt is an edited form of household dirt. I have different recipes for the dirt I make. This recipe is primarily soil, dried blood, manure, plaster, cumin, turmeric, chili powder, paprika, toilet bluing, Pepto-Bismol, and crushed glass. It is about what happens when you are at a table. If you are like me, you invariably spill things. I just took that accident and extracted it out from the event, making an excessive spill on a much larger scale. The tablecloth stain consists of two forms of coffee, Worcestershire Sauce, Pepto-Bismol, and grape and cherry Kool Aid. I placed a tablecloth and twelve cups onto a dining room table, and poured the ingredients with the intention of spilling them. I had some control over which cups spilled more than others, but other than that, I had no further control over the process. Those moments are accumulation – the accumulation of materials that are the products of usage.

In one of the two side galleries, are what I consider voided rugs–sort of the opposite of accumulation. It is what happens to a rug after it is used. When you use a rug, the bottom wears down or out. I bought new rugs and wanted to wear them down. Instead of walking all over the rugs, which is too autobiographical, I burned them. I covered the rugs in turpentine and ignited them until I got scared. I wanted to remove myself from the usage yet still achieve the effect. The process by which I did this is not relevant, the result is. After you burn a rug, you have to clean it. I cleaned the carpets with water and chlorine. The burning process was purely functional.  It is mainly usage, repair and the redemption of showing it. I try to pull away from hands-on mark-making. The bustier filled with moisturizer exists between accumulation and absence.  It is edited, literally.  In a sense, one of the items used in a bustier, when it is in use, is moisturizer. Moisturizer is used to replenish what is lost. The original bustier I created ten years ago was filled with lard, and this same principle applied. When one wears a bustier, one fills it with all sorts of materials, one of which is moisturizer.

The works in the center gallery began as photographs of light, and wound up as records of a process. Photographic paper starts out as a photograph, so in a sense the material is a photograph, but the object is record. It is important for me to see them this way, because they are photographs of endless possibility. My idea was to work with photographs, and one way to ruin a photograph is to walk on it. I went to a photo shop, and on a large scale they shined light on the paper and developed it, turning it completely black. It works in a kind of a converse way, that is, when you hear photographers talk about film and photography, they always talk about light. I figured I would start off with all of the light possible, and work back from this, so it becomes more material than light.  It is the endless possibility of what that photograph is, because it is a photograph of anything possible. As long as it is a photograph of anything possible, I can go anywhere I want representationally. I can reenact anything I want.

I inquired about some of the most famous people from Pittsburgh, and one is Gene Kelly, so I chose the “Singing in the Rain” sequence. I was Gene Kelly. It took a long time to get the floor pieces to work, and I toyed with ideas about how to remove myself from the process. With mud on my feet–mud from under the sink or behind the toilet of a house–I danced and sang on the floor paper. The materials ate away at the emulsion and caused the images. Then I cleaned off the paper and a record of my act was left. I cannot have someone video tape me because it would contradict the work, which is a record, a record which stands somewhere between a performance and a documentation of a performance. It is not secondary to an event; it is primary. I am removed from it because the images are not specific to me. They are records and not images. It is not a documentation of a performance and it is not a description; it is a record, a record that exists as an object. It is a trace.